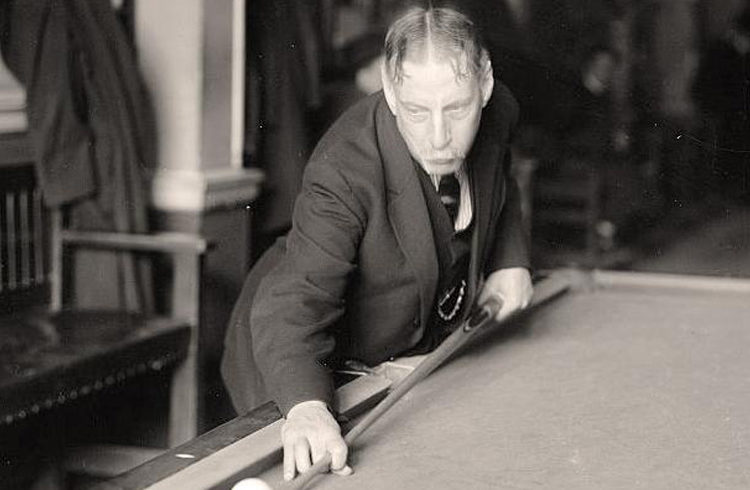 The public surrounded the table, expectant. Jerome Keogh caresses the tip of his cue and observes attentively his rival’s turn. Only nine balls separate him from the world billiard title in the modality of continues pool, while his opponent needs to pocket 63. But his opponent is Alfredo de Oro.

With amazing aplomb, almost offhandedly, De Oro pockets one ball after the other. His movements are confident and elegant. The phlegmatic Keogh thrusts his cue on the floor. The breathless spectators control their exclamations.

When there’s one ball left, a single ball, the Cuban pool player takes his time. He delays hitting the ball, delighting in the gestures; he stops time like a master of suspense. The public becomes impatient. The journalists, who had already picked the day’s headline, hurry up to change it: “The Champion Falls.” Keogh, astonished, doesn’t stop looking at the pocket.

The decisive ball is almost a foot from the pocket and the cue ball one foot away, in a straight line. De Oro, uplifted by a growing murmuring, suddenly strikes. The white ball fully hits the other, which goes straight into the pocket. The crowd bursts into a scream.

For Pearson’s Magazine there are no doubts: it’s one of the most incredible pocket billiards matches in history. That’s what the magazine wrote in its May 1905 issue, a short time after the famous meet. More than a century since those events, many still believe it is thus.

This, however, is not the only memorable anecdote about Alfredo de Oro. His successful and long-lived career was rich in tense, frightful, astonishing, dazzling games; and, above all, in victories.

De Oro was born in Manzanillo, the former province of Oriente, in 1863. It was his brother Joaquín who for the first time placed a pool cue in his hand when he was barely an adolescent, and since then no one was able to separate him from that passion. It is said that, despite his young age, in the early 1880s he defeated Havana’s most experienced players. His name would soon gain universal relevance.

His first incursion into an international tournament was in 1887, and already by then he finished in a tie at the top with another two players. But the nervousness of a debutant led him to make a mistake in the tiebreaker and condemned him to third place.

However, he got his own back a while later and won his first world title; the first of many. Alfredo de Oro won a total of 31 world crowns, of which 18 were consecutive. No other billiardist has been able to even get close to that record.

His capacity for concentration was proverbial. His skill and sense for calculating the trajectory of the ball were unique in his time. He distinguished himself not just in continuous pool but also in other game modalities, especially in the three-cushion caroms, in which he also proclaimed himself champion.

In the United States his name was admired and, at the same time, feared by his opponents. In Cuba he was compared in greatness to José Raúl Capablanca and Ramón Fonst.

He even disputed a world final on the island. After two decades of absence he faced Charles Otis in the Payret Theater. He was already 56 years old, but he was able to retain the title when competing against his countrymen. Since then, the government of Mario García Menocal would grant him a life pension.

Amazed, journalist José Sixto Sola wrote about him in the magazine Cuba Contemporánea: “even at his age, he conserves his marvelous skill, imperturbable calmness, a steady hand as if it were made of iron, a fast and original ideation, which has made him the greatest among modern billiardists.”

He still had things to do.

In 1922, at 60, De Oro was defeated by U.S. player Johnny Layton. Many thought at the time that that would be the end of his career. However, 11 years later he returned to beat Layton and to regain his crown. He would announce his retirement the following year. It was the end of an era.

Living in the United States, Alfredo de Oro passed away in 1948. Two decades later he was posthumously inducted into the Billiard Congress of America’s Hall of Fame and in 1999 the specialized magazine Billiards Digest ranked him number 4 among the 50 Greatest Players of the 20th Century.

In Cuba, his achievements were lost in oblivion. Researchers like deceased Irene Forbes have partly recovered his memory. An academy founded in the Havana municipality of Cerro would also be baptized with his name.

Nevertheless, there’s still a long way to go to return him to the place of honor he deserves.

Despite all the years that have gone by, the sport feats of Alfredo de Oro continue shining until today, in Cuba and in the world, in the universe of billiards as well as outside it. And they do so with the golden light of the immortals.