Kamala Harris said they would backtrack on Trump’s failed policies, and as Joe Biden did previously as vice president, he will also demand the release of political prisoners and make human rights a centerpiece in diplomatic relations. 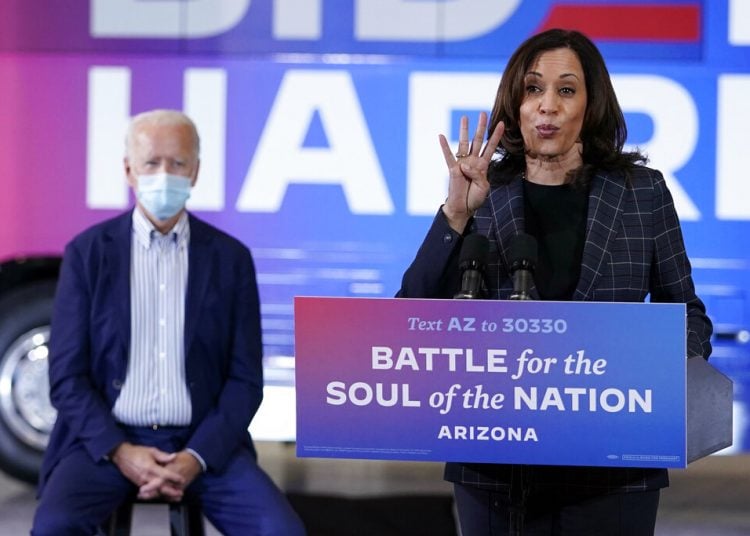 Democratic vice-presidential candidate Kamala Harris speaking at a rally in Phoenix on October 8, 2020. Behind her, Joe Biden listening to her. Photo: Carolyn Kaster/AP.

The Democratic candidate for the U.S. vice presidency, Kamala Harris, affirmed in an interview with EFE that if she and her running mate, Joe Biden, reach the White House, they will repeal the restrictions that Donald Trump has imposed on the island, although the end of the embargo will not happen “soon.”

Harris said they would backtrack on Trump’s failed policies, and as Joe Biden did previously as vice president, he will also demand the release of political prisoners and make human rights a centerpiece in diplomatic relations.

Biden, who was the vice president of Barack Obama (2009-2017), has expressed his desire to improve relations with Cuba and return to the policies of the stage known as “thaw,” which began in 2014 and ended with the arrival of Donald Trump to the White House in January 2017.

During that stage of détente, Obama took several measures to relax the restrictions of the economic embargo that has been imposed on the island since 1962 and even asked his country’s Congress to lift it, since that body is the only one with the capacity to do so. Asked about it, Harris avoided speaking directly, although she was pessimistic about the possibility of that happening.

She just said that the embargo is the law, and a Congress act is needed to lift it or it is needed that the president determine that a democratically elected government is in power in Cuba, adding that they don’t expect any of these things to happen anytime soon.

Harris, senator for California, also lashed out at Trump’s Cuba policies and placed special emphasis on immigration measures that restrict the arrival of refugees to the United States.

Regarding this she said that Trump is deporting hundreds of Cubans back to the dictatorship and back to a regime repression that has only increased under his presidency, adding that there are almost 10,000 Cubans who are languishing in tents along the border with Mexico due to Trump’s anti-immigrant agenda.

Harris was thus referring to a program called “Stay in Mexico” and which forces Cubans and other refugees to wait in Mexican territory for the resolution of the asylum requests they have made to the United States.

Although there are no official figures on the specific number of Cubans who are in Mexican territory for this program, the University of Syracuse has compiled a series of data through the asylum requests presented in the United States and ensures that there are currently 67,790 refugees in Mexico due to Trump’s policy, of which 10,027 are Cubans.

Finally, the senator also accused the president of separating Cuban families through restrictions on family visits and remittances. Under the Trump administration, the U.S. has imposed limits on remittances and banned commercial and charter flights from U.S. territory to Cuba, although it allows some planes to still land in Havana.

In addition, Trump has tightened the Cuba policy with reductions in diplomatic staff, increased trade embargo, restrictions on cruises and increased impediments to travel to the island, where tourism by Americans is already banned.

Trump has strengthened his policies toward Havana in recent months in an attempt to win the vote of Cuban-Americans in the key state of Florida, where Biden and Harris have opted for a slightly more conciliatory speech.