The Cuban American Youth Orchestra continues to break the barriers that politically separate Cuba and the United States, through exchanges with musicians and students. 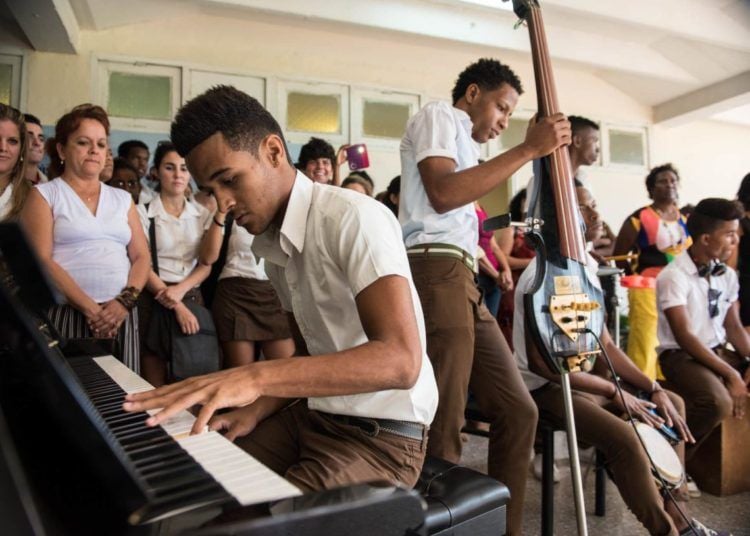 Cuban music students during a meeting with the Minnesota Orchestra in 2015. Photo: Nate Ryan for MPR.

In May 2015 musician Rena Kraut saw her busy and serious colleagues of the Minnesota Orchestra smile as they rarely do. It was in Havana, in the relaxed atmosphere of an exchange with Cuban music students. The locals patiently taught the Cuban clave to the eminent musicians who had recently offered them a master class.

After that, Kraut could not shrug off what she felt that time, and in a stroke of creativity and inspiration she devised ways to maintain and multiply those moments between young musicians from both countries: she created the organization Cuban American Youth Orchestra (CAYO).

CAYO is dedicated to providing educational and work opportunities for student and pre-professional musicians from the United States and Cuba through workshops, art delegations and cultural exchanges, as it announces on its website.

The organization was founded in December 2016, just two years after the resumption of relations between Cuba and the United States. Since then, the nonprofit organization has been at the forefront of the cultural commitment between the two peoples.

Its official presentation says they are proud to have the friendship and assistance of the Minnesota Orchestra, the Saint Paul Chamber Orchestra, the University of Minnesota School of Music, the Cleveland Institute of Music, the 21C Media Group and the Classical Movements, and that with their help, CAYO’s programming offers students from both countries opportunities, ways to make themselves known and a sense of optimism about their shared futures.

The first thing that Kraut, a 42-year-old independent musician, clarifies to OnCuba is that the name of the orchestra is not limited to descendants of Cubans living in the United States, but that it is a project that includes students and musicians both from there and from Cuba. Although the Minnesota Orchestra and the trip served as inspiration for the project, she adds that CAYO is an autonomous and totally independent organization.

How did the idea of ​​this collaboration begin?

I had the opportunity to go to Cuba with the Minnesota Orchestra in May 2015. It was big news, because it was the first big art organization from the U.S. to visit the island after the restoration of relations.

It was amazing. We spent a lot of time with students, which usually doesn’t happen often, when you are doing a tour with a professional orchestra. In general, only concerts are given.

At this point it was critical to us to go and do something for the community, so we went to the ISA [Higher Institute of Art], ENA [National Art School] and the Amadeo Roldán music school. I remember that Guido López-Gavilán conducted us and we got to be very friendly with the students. They wanted to learn as much as they could from us. We were really excited to be able to be there celebrating this really good time between our two countries.

We had this moment where we were playing Cuban music, and we had to do the Cuban clap [the Cuban clave, three with two], and the Cuban students started looking when we started clapping and saying no, no, no! and they were telling us all the things we were doing wrong. And I said, “wait a minute, we can learn so much from these young students and they have so much to offer.”

Cuba is the most musical country on earth. People are very talented, and even if their equipment doesn’t let them do what they deserve to do.

How did CAYO appear then and how does it prepare the trips?

Over the next year, I corresponded with some of the students I met, and I couldn´t shrug off the magic: it was in my heart and I wanted to share it.

I had already traveled with American students to Latin American countries and had amazing experiences. So I decided to start an organization called the Cuban American Youth Orchestra, which would take students from both countries and put them together, have an exchange, have the opportunity to travel and play together. I was envisioning a month-long tour between the two countries, in DC, New York, Miami, Havana…. It was a wonderful time, so everything was very hopeful.

Despite the change in the political situation [she said referring to the Trump administration], we want to work on this anyway. We became a nonprofit organization in December 2016 and in 2017 we invited four students from ISA before the embassy [in Havana] closed. They came to Minnesota and spent a week living with American musicians from the Minnesota Orchestra and working with students from the University of Minnesota, being coached, mentored, and doing free presentation concerts for the public. They also had their own instruments, thanks to generous donors.

We wanted to do it again, with a different group, but we got four students rejected in Europe, they weren´t allowed to have visas. We couldn’t do it because we could not make them fly all over to other countries and get rejected. So we brought four students with Spanish passports [who only need an entry permit and don’t require a visa], in April 2018.

Sometimes it was supposed we should bring five students for a quintet, but as the last one didn’t get the visa we became a quartet. That is how things function between America and Cuba, you have to be ready to change.

Before that we traveled with American students to Cuba in February 2018. And this is something we still can do, it is still legal.

We also bring to Cuba regular people who are curious and want to meet musicians and know more about Cuban culture.

How do you choose the students who participate in the project?

Students recommend others, wonderful young musicians. In both countries, we want to pick those who are not only good performers, but also good ambassadors, open-minded, and want to learn about other cultures and want to help this mission of building bridges between our two countries.

We have chamber music, because we are still a small organization. We give students the opportunity to play alongside professionals, teachers and other students.

What do you mean with the “art diplomacy” you frequently mention on the social media?

Playing an instrument is not enough. What else can we do as artists to serve a bigger purpose? Mine was to use the art, the music, to bring both cultures together, put them closer.

The door opened a little bit between our countries, and this project is putting a foot in the door and it is saying, “no, you cannot close it,” because after these interchanges, a lot of this continues developing. That is how I see the main mission of CAYO, which is continuing this work of diplomacy using music, between Cubans and Americans, with equal exchange, both countries have so much to offer the other.

We are very flexible; we can adjust to any politics. After Trump it does not feel that we are making an equal exchange, because Cubans have less chances to come. Also, we cannot pretend the blockade is not a problem. The world is not easy, so everything positive we can put in it is a win.

I don´t see how denying the opportunity to young Cubans to come to the U.S. is going to help them. We have to keep going, we have these friendships, we are growing these relationships. No politics in the world can change that.