Cuban baseball players members of the Cuban Baseball Federation can be hired by any of the 30 MLB teams. 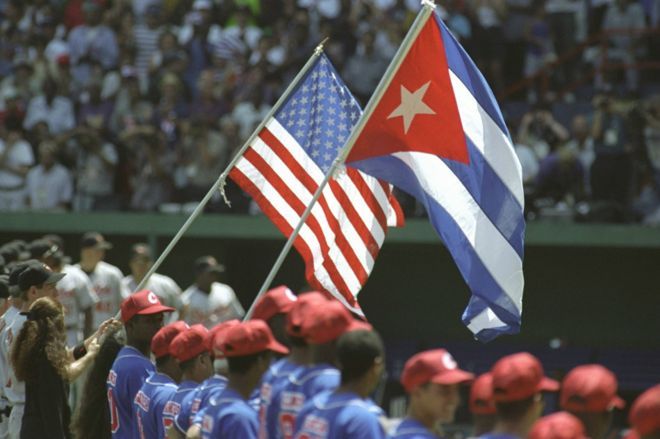 Cuba and MLB signed a historic agreement. Photo: Taken from the BBC.

According to the Jit website of the Cuban Institute of Sports, Physical Education and Recreation (INDER), the Cuban Baseball Federation (FCB), Major League Baseball (MLB), with the approval of the MLB Players Association (MLBPA), signed an agreement so that Cuban baseball players who are members of the FCB can be hired by any of the 30 MLB teams.

OnCuba had advanced the possible agreement on Wednesday night.

The note explains that the parties signed the agreement that will allow Cuban baseball players, who play in the National Series and in the rest of the Cuban baseball competition system, to sign contracts with U.S. teams.

The agreement, materialized after three years of negotiations, ensures collaborative, stable and non-politicized relations between the MLB and the FCB. In general terms, its clauses are similar to those established by the MLB with other foreign leagues such as the Nippon Professional Baseball (NPB); the League of the Korean Baseball Organization (KBO) and the Chinese Professional Baseball League (CPBL).

It also represents a legal way and in accordance with international practice so Cuban players can play without discrimination, on equal terms, in the MLB, without being forced to break ties of any kind with their country.

With practical application as of its signature (December 19, 2018), the agreement establishes that Cuban players will be able to play in the U.S. professional league without losing their residence in Cuba, nor their link with Cuban baseball.

Under the agreement, the FCB must release all hired players who are at least 25 years of age and have six or more years of experience in the National Series.

The FCB will receive a payment of a release fee, totally independent of the contract signed by the player. Additionally, it could free players who do not meet these requirements, who would be hired as amateurs in the Major Leagues.

The agreement also applies to Cuban players who have emigrated to third countries to try to get to the MLB that way, and who for diverse reasons have not achieved it and are reinserted into the national competitive system.

This agreement will regulate the relations between the FCB, MLB and Cuban players from the moment of its signing. Like any agreement, it does not imply a retroactive recognition of previous events. It will exclusively apply to relations established between these individuals from the beginning of its application.

The agreement will help curb illegal activities such as human trafficking, which for several years have put at risk the lives and physical integrity of many young Cuban baseball talents and their families.

The agreement is a recognition of the Cuban sport, in particular the quality of baseball’s development system in Cuba, which despite many obstacles, continues to produce talented and passionate baseball players.

The agreement is part of the effort to continue strengthening the practice, enjoyment and development of the national sport. The agreement will have a positive impact for many athletes in the country, for national teams and the FCB.