The regional bloc held its 16th Summit of Heads of State and Government last Friday in Havana. 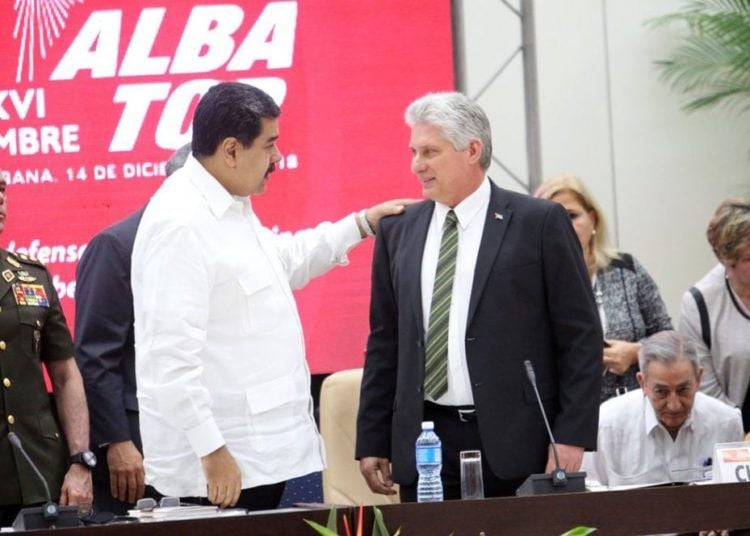 The presidents of Cuba, Miguel Díaz-Canel (c-r) and of Venezuela, Nicolás Maduro (c-l), during ALBA’s 16th Summit of Heads of State and Government held on December 14, 2018 in Havana. Photo: @CubaMINREX / Twitter.

The countries grouped in the Bolivarian Alliance for the Peoples of America (ALBA) commemorated last Friday in Havana the fourteen years of formation of a bloc that faces one of its most complicated moments, in the face of the return to the right that the region is experiencing and the United States’ open hostility.

In its final declaration, the 16th Summit of Heads of State and Government of the ALBA advocated a greater commitment to “political consensus”, “conscientious cooperation” and “integration.” The members of the bloc also bet on building a new international order characterized for being “democratic, inclusive, fair and equitable.”

The intergovernmental meeting brought together the presidents of Venezuela, Nicolás Maduro; Bolivia, Evo Morales; and Nicaragua, Daniel Ortega, among others, who together with their Cuban counterpart, Miguel Díaz-Canel, agreed to call for unity in the face of the conservative advance and Washington’s interference.

In this new regional political cycle, the ALBA has lost what became one of its main supporters, Ecuador – President Lenin Moreno withdrew his country in August in response to the Venezuelan migration crisis – while Saint Lucia did not send anyone to the Havana meeting, in what is understood as a distancing.

Venezuela is going through an unprecedented social, economic and political crisis; Cuba has significant liquidity problems aggravated by new U.S. sanctions; and Nicaragua has also been mired in instability for months, with anti-government protests that have left hundreds dead and arrested, according to humanitarian agencies.

In their meeting, the Bolivarian countries attributed this scenario to a “neocolonial” offensive that seeks, through interference, the promotion of “internal subversion” and “economic aggressions” to destabilize left-wing Latin American governments.

Cuba, Venezuela and Nicaragua, whose governments were recently baptized by the United States as “the troika of tyranny,” received at the summit the solidarity of their ALBA partners as the main targets of the wrath of the American power.

For the host leader, Miguel Díaz-Canel, who was attending a conclave of the cooperation mechanism for the first time as president, those strategies represent the main “dangers to peace in the region,” whose “most valuable asset” is unity.

“We cannot be naive and silently accept the coup aggressions against other sisterly countries. It is not possible to underestimate the great deployment of resources of our historic adversaries to derail governments, impose chaos and overthrow democratically elected authorities,” he warned.

In the opinion of Bolivian Evo Morales, it is necessary to strengthen concertation mechanisms such as the ALBA to stop the “imperialist attacks” of the “growing right” in Latin America, while Nicaraguan Daniel Ortega – who decided to speak in the plenary meeting at the last moment after not doing so in the segment reserved for presidents – accused the United States of not being able to coexist with the norms of international law that condemn the interference in the sovereignty of other countries.

In the face of the rhetoric of solidarity and the “vivas” to the ALBA, Venezuelan Nicolás Maduro was the one who placed on the table the bloc’s inability to realize an effective economic integration despite its social achievements in the fields of education, health or culture.

With the turn to the right of Brazil and Argentina, two of the largest economies in the region that although they did not belong to the Bolivarian bloc were left-wing allies, Maduro called for financial integration as the “basis for independence” in the face of the neo-colonialist and imperialist attacks in a “region in conflict.”

He also reiterated, as he did last January, his proposal that the bloc adopt the Petro “cryptocurrency” – created to bypass U.S. sanctions and backed by Venezuelan oil – “as the center of its monetary efforts for economic integration.”

Along with the calls to unity, the other constant of the meeting consisted in the mentions to deceased ex-presidents Fidel Castro and Hugo Chávez, architects of the creation of the ALBA as an alternative to the Free Trade Area for the Americas (FTAA) promoted by the United States.

In addition to the founding countries, the bloc is currently made up by Antigua and Barbuda, Bolivia, Dominica, Nicaragua, Saint Lucia, Saint Vincent and the Grenadines, Grenada and Saint Kitts-Nevis.