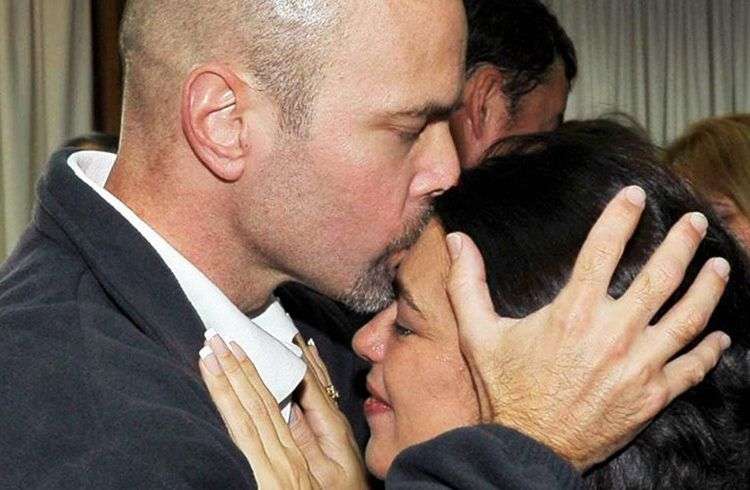 The closing of the IV Regular Session of the Eighth Legislature of the National Assembly of People’s Power of Cuba held on Saturday in Havana was especially awaited by many.

Since the previous day it was said that President Raul Castro was going to talk about the issues in which he promised to deepen his speech and historic December 17, 2014. Among the correspondents of the foreign press it was also rumored that the sudden invitation to participate might have to do with an appearance by Fidel Castro in Parliament and the special invitation to René, Fernando, Antonio, Ramón and Gerardo, the “Five”.

Raul closed the Assembly, Fidel did not attend … and there certainly were the Five. I would argue that among them, a couple monopolized everyone’s eyes: Gerardo and Adriana.

Gerardo Hernandez is one of the Cubans who spent more than 16 years in US jails accused of espionage. He was the head of a network that monitored the activities of organizations, from Miami, planned acts against the Cuban government. Out of the Five, Gerardo was the legally more complicated case, sentenced to two life sentences and 15 years in prison.

The long years of struggle of his family for the release of the Five, forced to live a public life that often heard them say “no we had never imagined or wanted.” So we learned that during that time Gerardo lost one of his sisters and his mother, and that a person was accompanying him unconditionally: Adriana, his wife.

Some of the letters that devoted to each other were made public, we learned of the determination and firmness of both, but discovered, above all, a love that seemed to be above everything and everyone.

For many years Adriana could not see her husband and often, despite her firmness, we saw her mourn when she spoke of Gerardo, of a life that seemed not going to be. So everyone who knew of the Five knew Adriana fighting against time, with over 40 years of age and over 15 without seeing her husband, the dream of being a mother was slipping.

But “love begets wonders” and the December 17 Adriana received her husband carrying his daughter in her womb. With a kiss on the forehead, memorable for many, Gerardo received his mate, his wife and the mother of his daughter.

I do not know others but they remind me of Ignacio (Cuban general in the Long War against Spain) and his wife Amalia; I am not attracted to the beaten track, not fairy tales, not even believe in eternal love, but today I spent all my time in the Assembly looking at these two beings who could not hide their elation, continually caressing their baby in the tummy, they looked and played, rediscovered each other.

Then I saw them leave, he was trying to protect her from journalists who pursued them, almost could not hear what he was saying. Nothing had been published in the Cuban press on that surprise pregnancy, they had not made statements. Adriana had closely guarded the secret that belonged to him, but today Gerardo had no choice: “We will have a child, we had to make through a remote control, but everything went well.”

“Within 15 days or so a girl will be born and who will be called Gema, Adriana says that because it is a gem, and I say that is because if it was a boy I was going to name him  Gerardo and what most resembles Gera is Gema “.

I kept watch; he did not look like a man who had been imprisoned more than 16 years, not lost his sense of humor, or tenderness.

“For too long we dreamt of a time like this, we dreamed that one day we would be here, sometimes when we got up in the morning we thought things waiting for us during the day and the only thing that lifted our spirits was dreaming about this moment, “said Gerardo.

“Insanity … it’s like I can describe these moments right now, because we have such a joy. They were 16 years and in these 16 we had to witness nasty things, (Hey, do not cry because then I cry, girl … he tells Adriana) and we had really difficult times but when we found the first Cuban and gave the first three hugs we’ve forgotten all that, really, because the love that our people has given us heals any wound. ”

And Gerardo says goodbye to all thanking, and I kept thinking I do not exaggerate when poets speak of love that knows no borders or impossible. I thought about the times we live in my island and imagined a better future for all. I left thinking that the poet was right: “the problem, sir, is to always sow love.”

Cuban Lawmakers speak of the rapprochement between Cuba and the US