One of the areas of the exhibition is dedicated to the project to modernize Havana commissioned in the late 1950s to the great Spanish architect Josep L. Sert, Harvard dean of design. 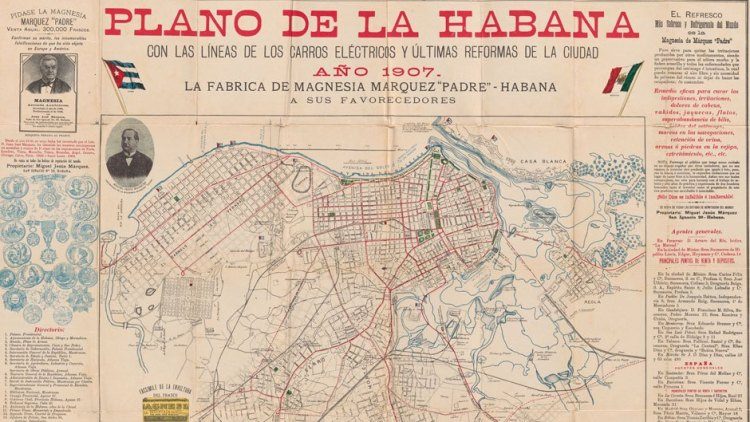 Miami, where a large community of Cuban immigrants and their descendants lives, and which is the headquarters of the largest collection of documents and other materials on Cuba outside the island, will also commemorate the 500th anniversary of the foundation of Havana with a sample of its treasures, such as a 16th century map, letters from José Martí and 19th century lithographs.

“This exhibition projects the message that we have a very wide-ranging vision of what Cuba’s history is. Not only from the outside in, we understand that Cuban culture is far beyond Cuba and the exile,” the director of the Cuban Heritage Collection (CHC) of the University of Miami (UM), Elizabeth Cerejido, said to EFE agency.

The CHC, the School of Architecture and the Center for Urban and Community Design of UM joined forces to create an exhibition that reviews the five centuries of a “unique” city, according to a press release.

The exhibition, which will be on display until February, is complemented by an international symposium on the architectural and urban development of the city during the last five centuries, which is being held this Thursday and Friday.

This Saturday, November 16, marks the 500th anniversary of the foundation of the city of San Cristóbal de La Habana by Spaniard Diego Velázquez de Cuéllar and the capital of Cuba will celebrate it in style.

In Miami, some 367 kilometers from the Cuban capital and with a Little Havana among its best known areas, Professor Sonia Chao, curator of the exhibition and organizer of the symposium, sees Havana as “a grand lady and an amalgam of her different historical times.”

She needs “another layer of makeup and surgery,” Chao affirmed, but it should be combined “with the city’s fabric.”

According to what she said to EFE, “maintaining this jewel doesn’t mean that you have to mummify or keep it in the past, but that its growth be in a way that respects its urban fabric and its historical character.”

Among the objects of the Cuban Heritage Collection, founded in 1998 by a group of Cuban librarians based in the United States, some are of great historical value, such as one of the oldest maps of the island of Cuba, from 1546, or letters from the poet José Martí, Cuba’s national hero.

The collection has been growing since 1998 thanks to donations.

“There is of course that nostalgia for Havana that many feel, as Cubans who live outside the island, which is also underlying within the exhibition,” says the CHC director.

Visitors can see the reproduction of a classic room of a wealthy Havana family with rocking chairs and a balcony with stained glass windows and some of the colonial lithographs by artist Frederic Mialhe Toussaint, who visited the island in the early 19th century.

“Everything that is on display in the exhibition comes from the collection. It is a representation of the wealth of the material we have, of the vast collection in various materials, whether maps, historical books, artist’s books or plans,” adds Cerejido.

Havana is the second oldest city in the New World among those that are capitals today―the first is Santo Domingo―and in its streets the fusion of various architectural styles from the baroque, the neoclassical or the art deco is evident.

In 1982 UNESCO declared the historic center of Old Havana and its fortifications a World Heritage Site.

Sonia Chao, who heads the Center for Urban and Community Design at the UM School of Architecture, told EFE that “what makes Havana unique must be protected” and avoid “destructive modern urbanism,” which has created homogeneous cities around the world.

“The personality of Cubans and the city is a very unique combination, and if Havana is well-respected, it will continue to grow and prosper, but each of those aspects must be cared for,” said the expert.

In the presentation of the symposium opened this Thursday, Chao affirmed that “at present Havana seems disheveled and in some cases very deteriorated, but urbanistically it is intact, paradoxically thanks to the lack of development and infrastructure interventions in the last six decades.”

One of the areas of the exhibition is dedicated to the project to modernize Havana commissioned in the late 1950s to the great Spanish architect Josep L. Sert, Harvard dean of design.

The plan would have put an end to part of Old Havana to open roads to traffic and the construction of large buildings, but the triumph of the revolution led by Fidel Castro left the plan just on paper, as can be seen in the Otto G. Richter Library, where the exhibition is hosted.

The symposium will open with the screening of Viva El Vedado, a documentary about one of the most beautiful neighborhoods in Havana, produced by Mary Ebrahimi and Secundino Fernández.