During a dinner hosted by the king and queen of Spain at the Palace of the Captains General, both dignitaries made speeches in which they presented the benefits of their respective social models. 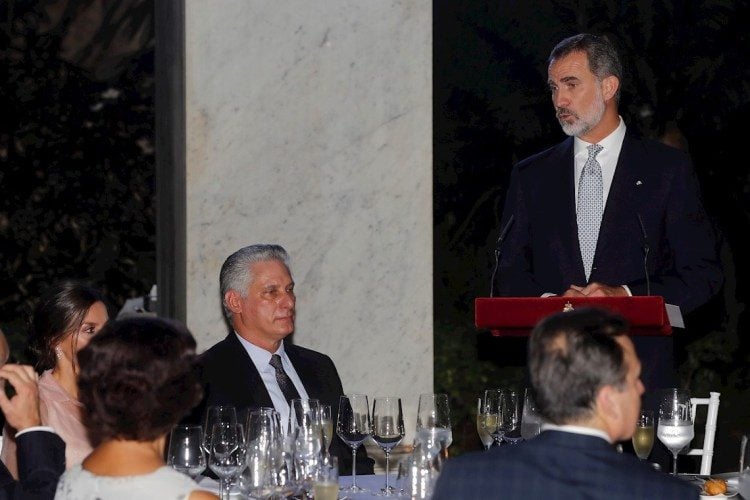 Felipe VI recalled this Wednesday before Cuban President Miguel Díaz-Canel that Spain brought to Cuba the conception of universal human rights, defended their respect and stressed that it is the Cuban people themselves who must decide on their future because “the changes in a country cannot be imposed.”

The king of Spain conveyed that message in his speech at the dinner he hosted for the Cuban president, who was accompanied by his wife Lis Cuesta, on the occasion of the state visit to the island accompanied by Queen Letizia.

The monarch underlined the need for the existence of institutions that represent all citizens and that they can express their preferences for themselves and find in them “adequate respect for the integrity of their rights, including the ability to freely express their ideas, freedom of association or that of assembly.”

Along that line, he stressed that a sure lesson that is drawn from history is that evolution, adaptation and change are inevitable.

“Nothing remains frozen in time, and whoever resists its passage loses the opportunity to collaborate in the design of that future that is already being born or, even more, that is already here,” he added.

It was then that he defended that the future of the Cuban people should be elucidated by the citizens themselves.

“The changes,” he said, “cannot be imposed, they have to be born from internal dynamics. But in the same way that a change that does not emanate from within the social and political forces of a country cannot succeed, it is equally true that the change will not bring consensus and wellbeing if it does not represent the will of the citizenry.”

Felipe VI presented to Díaz-Canel the Spanish experience for the process of change in which his country is immersed, and highlighted what the current 1978 Constitution meant for Spain and said it was based on agreement, negotiation, consensus and reconciliation.

For his part, Cuban President Miguel Díaz-Canel vindicated this Wednesday before Felipe VI the Cuban system that, he said, is aimed at achieving greater wellbeing for its people, and thanked Spain’s support in the face of the “unfair” U.S. sanctions.

In his address, after hearing the king’s in which he defended human rights and democracy, the Cuban president stressed that his country’s society is being renewed, is evolving and advancing while preserving its traditions and values ​​and defending its rights.

“We are guided by clear principles of independence and sovereignty with the certainty that it is a path towards greater wellbeing for our people,” he added.

It is, he said, a path chosen by Cubans of their own accord.

At the same time, he specified that, in order to understand Cuba, its dreams and what Cubans do, it is necessary to understand everything that the “unfair” U.S. blockade condemns them to.

It was then that he showed Cuba’s appreciation for “Spain’s clear and public support against the unjust sanctions and unilateral extraterritorial coercive measures imposed on Cuba by the United States government and that damage so much,” he said, “the economy and commerce.”