The Razones de Cuba site denies that “a ‘special collection’ is currently being carried out due to the arrival of the king and queen of Spain to Cuba or the celebrations for the 500th anniversary of Havana,” although it acknowledges that the methods and personnel of the Zoonosis program are not the best and states that “work is underway for an Animal Welfare Law.” 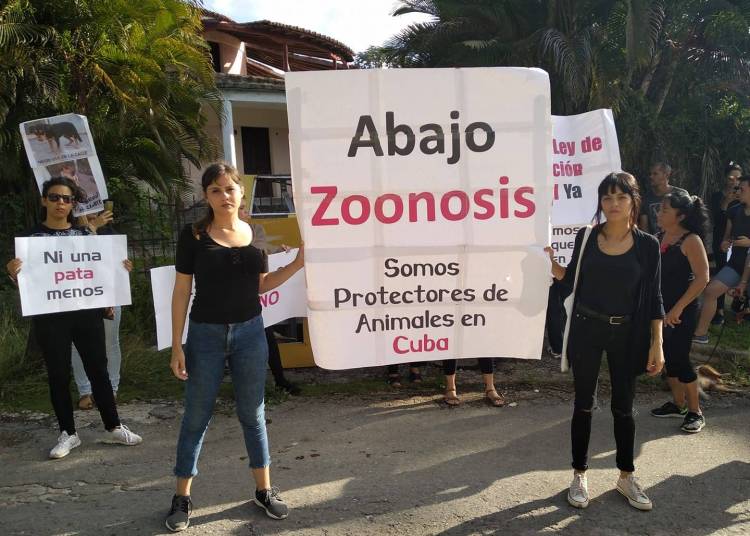 The official website Razones de Cuba denied this Wednesday the complaints of animal protectors who in recent days denounced in the social media a massive pick up and putting to sleep of stray dogs in Havana, on the occasion of the visit of the king and queen of Spain and the city’s 500th anniversary.

In an editorial note, the website attributes to “misrepresentation” or “ignorance” the “media campaign that has been unleashed on the Internet,” in which “heated statements” of “down Zoonosis,” “zoonazis” or even the accusation of “murderers” or “genocides” can be found in several posts.

Razones de Cuba recognizes that the Zoonosis program, under the Ministry of Public Health (MINSAP), “has among its functions picking up stray dogs and cats,” which, it says, are put to sleep if they are not claimed after 72 hours. But it denies that “a ‘special collection’ is being carried out due to the arrival of the king and queen of Spain to Cuba or the celebrations for the 500th anniversary of Havana,” and that the animals that are picked up are thrown to the lions.

It affirms that this program, which at the national level is directed by veterinarian Jusayma González, is aimed at “reducing the incidence in human beings of any zoonotic disease, not at controlling animal populations.” In addition, it denies―as some activists have said on the social media―that 15 vehicles of the entity officially called the Canine Observation Center have gone out to “clean” Havana, because “it doesn’t even have the three cars it’s supposed to have.”

“Currently, only one pick-up vehicle is operating, given the fuel limitations imposed by the U.S. sanctions,” explains the note, which states that “the photos circulating on the social media are outdated.”

“Apart from the strictly technical and material limitations, the collections by the Canine Observation Center are aimed at responding to complaints from work centers or people who ‘call Zoonosis’ to solve problems of animal overpopulation, violent animals or behavior changes, suspicions of rabies,” it adds.

However, the note admits that “it is true that the personnel working in this center are not the most qualified, nor do they handle the animals they pick up with the greatest skill” and that “many times they behave abruptly and even violently, which is something that must be improved,” for which it asks for “the help of the protectors and civil society in general.”

It also recognizes that for the putting to sleep of animals “strychnine is used, a substance that is not approved internationally and that MINSAP officials themselves admit should not continue being used.” And although it affirms that “the alternatives are not simple” because of the “limitations” Cuba is experiencing “in the matter of medicines,” it says that “there are other methods, such as the overdose of anesthetics,” those “that can put dogs to sleep in a less painful way” and “are being studied for their use.”

Given the undeniable existence on the island of animal abuse, the publication calls for “a greater link between the Zoonosis program and animal protectors, whether or not they belong to associations or organizations (which may or may not be recognized by law)” and it affirms that “giving a home to all those dogs that roam the streets of Cuba is everyone’s responsibility.”

Although it does not mention the protest held last Monday by a group of activists in front of a Zoonosis program center, which culminated in the rescue of animals that were there, Razones de Cuba does report on the meeting held a day later between representatives of the protectors and MINSAP authorities, which, it says, “was, in short, a first step to strengthen an alliance between the state sector and civil society to contribute to the aim that both share as an ideal: animal welfare.”

The note quotes Valia Rodríguez, one of the participants, who narrates that in the meeting “it was agreed to hold on November 15 an extended meeting with the Ministry of Agriculture, Animal Health, because they are important actors in the search for solutions.” At that meeting, according to Rodriguez, a short-term work plan must be coordinated for joint work between state entities and protectors on issues such as “the pickup of dogs, putting them to sleep, a rabies program and an education and awareness program on responsible possession and against abuse.”

Razones… also affirms that “work is underway on an Animal Welfare Law,” one of the Cuban protectors’ repeated requests, for which “the Ministry of Agriculture is coordinating a national commission, responsible for drawing up this legislation (the first of its type in Cuba).”

In that commission, it says, “specialists from the Ministry of Science, Technology and Environment, zoos, Hygiene and Epidemiology, veterinary institutes and clinics, among other institutions, are participating.”

Similarly, it explains that four draft laws had previously been submitted and that the current one “already forms part of the legislative schedule of the National Assembly of People’s Power for approval.” In addition, it ensures that a project for the creation of a Pet Registry, which “does not require an enabling law,” was also recently presented on the island.

This registry, the note concludes, “would be a step forward for this joint work to be carried out by the Zoonosis program, MINSAP and other state institutions, together with the passionate animal advocates emerging today from our civil society.”

Also on Tuesday, the “Hola Habana” program of the Cuban capital’s television channel criticized the campaign of recent days of animal rights activists, which has been joined by artists and other public figures. The program stated that the photos being disseminated on the Internet were false and that many comments from the protectors about the work of the Zoonosis program were due to “misleading information,” which has generated a wave of reactions and criticisms in the social media.