The meeting, which was not part of the visit’s official program, took place early this Thursday. 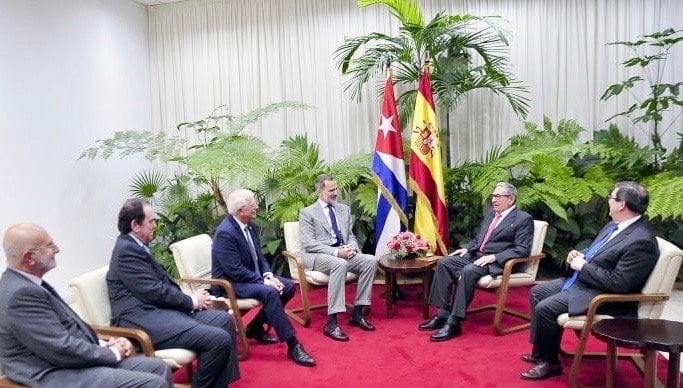 King Felipe VI during his meeting with the first secretary of the Communist Party of Cuba, Army General Raúl Castro. Photo: Casa Real.

King Felipe VI of Spain met this Thursday in private with the former president of Cuba, First Secretary of the Central Committee of the Communist Party of Cuba and Army General Raúl Castro, before finishing his state visit to the island.

The meeting, which was not part of the visit’s official program, took place early this Thursday.

This was confirmed by Acting Foreign Minister Josep Borrell, who told reporters that Felipe VI received the invitation for this meeting after the dinner hosted by the king and queen of Spain for Cuban President Miguel Díaz-Canel and his wife, Lis Cuesta.

During the dinner Felipe VI read a speech in which he highlighted the need for institutions that represent all citizens and that they can express their preferences for themselves and find in them “adequate respect for the integrity of their rights, including the ability to freely express their ideas, freedom of association or that of assembly.”

For his part Miguel Díaz-Canel vindicated this Wednesday before Felipe VI the Cuban system that, he said, is aimed at achieving greater wellbeing for its people, and thanked Spain’s support in the face of the “unfair” U.S. sanctions.

Regarding the meeting with Raúl Castro, Borrell assessed the invitation as a show of “appreciation and recognition of the importance of the visit” that will serve to “round off” relations to the highest level.

Although Borrell did not specify what matters were discussed at the meeting, he said they spoke about “everything.”

“It has been an open, frank dialogue, and without setbacks, but a king’s dialogue is not treated as that of a government president,” he added.

In 2017 it was Raúl Castro who formally invited the king and queen to visit the island.

Felipe VI has been the first king to come to the island on a high-level visit, after his father, Juan Carlos I, came in 1999 with Queen Sofia to participate in the Iberian-American Summit, in which Fidel Castro had a preferential treatment towards him, and then in November 2016 to attend the funeral of the leader of the Cuban Revolution.

With Goya in Havana

Also during this Thursday, the last day on the island, the king and queen visited the room of the National Museum of Fine Arts where one of Francisco de Goya’s iconic self-portraits will be exhibited for a month.

In his speech during the dinner hosted the previous night for Cuban President Miguel Díaz-Canel, the king insisted on his desire that Spanish culture be better known on the island and that it influence local creators.

“We want you to know our great works and therefore, on this trip, we have the privilege of offering the people of Cuba the impressive portrait of Goya that will be on display in the MNBA in the coming weeks,” said Don Felipe, who stressed the importance of cultural collaboration as an “essential element” in bilateral relations.

The canvas, dated by Goya in 1815, belongs to the Prado Museum’s collection, which celebrates its two centuries this year and has applied a restrictive loan policy, which makes this transfer much more exceptional, the Madrid art gallery’s first to Cuba.

This will be the fourth time that the painting has arrived in the Americas in the last two decades: the most recent during an exhibition in the United States.

The painting arrived on the island with the support of the Spanish Cultural Action Society and since last November 9 was in “isolated rest” in a room for its acclimatization, the Spanish ambassador to Cuba, Juan Fernández Trigo, told EFE.

Upon learning about the “deficit in 18th-century paintings” in the MNBA collection and Cubans’ special attraction to Goya, Fernández Trigo and his team contacted the Prado, who in the middle of the bicentennial celebrations showed “great generosity” by letting the canvas go to Cuba for more than a month.

“I think it will be a success. It will attract a huge audience. Cubans are going to have a historic opportunity to see a frontline picture,” said the diplomat.

For some days now, a large banner has been announcing the exhibition on the facade of the building that overlooks Havana’s Parque Central, one of the busiest points of the capital, which will turn 500 on November 16.

This will be one of the last official ceremonies of the king and queen in Havana before leaving for Santiago de Cuba (east), the second most important Cuban city and the first seat of the Spanish colonial government on the island, since its founding in 1515 until 1556.