A recent CIA report revealed that it has not found any evidence that the symptoms attributed to the Havana Syndrome, triggering the deterioration of diplomatic relations between the two countries, had been caused by an adversary of the United States. 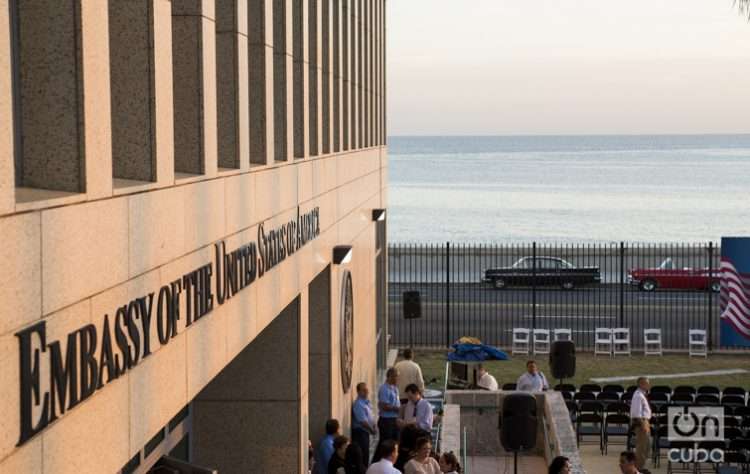 Embassy of the United States in Havana, photo taken on August 14, 2015 during the official inauguration headed by Secretary of State John Kerry. Photo Alain Gutiérrez (archive)

A few days ago, in an interview granted to CNN, Cuban Deputy Minister of Foreign Affairs Carlos Fernández de Cossío publicly asked President Joe Biden to resume diplomatic relations between Cuba and the United States. The reason? The recent CIA report on the so-called Havana Syndrome found, in most cases,1 no evidence that the symptoms had been caused by an adversary of the United States.

Fernández de Cossío declared that the suspension of diplomatic services has harmed Cubans who wanted to emigrate or travel to the United States.

Fernández would have other reasons to give Washington, but diplomacy would tell him not to mention them and instead worry –– what a surprise –– about those who want to leave Cuba or travel to the United States. It is a rare appearance of a high-ranking Cuban official before the cameras of CNN since his statements to the foreign media — and even national ones — are scarce.

For its part, the State Department from Washington has provided what has been considered by certain media as a response to the Cuban deputy minister. The statement said: “The efforts of the intelligence community continue and will deepen their analysis in a subset of cases, the most difficult to solve, as part of its effort to determine if a foreign actor may be involved,” referring to about twenty cases that are pending analysis. And elsewhere it notes that Secretary of State Blinken has met with those affected and “has no doubt that their symptoms are real.”

If this truly is Blinken’s official response to Fernández de Cossío, his false candor is surprising. No one doubts that the symptoms of those affected are real. But what it is about, Mr. Blinken, is that the measures taken against Cuba are exclusive, unfounded according to the CIA report and seem to be motivated by political intentions other than the Havana Syndrome.

The Cuban deputy minister also referred to the CIA in his interview “It is an agency,” he said, “known for its tricks and not for its honesty, so one can think that they are saving a space to manufacture any other version in the future.” The CIA will not be the only intelligence agency in the world that lies, but it has publicly acknowledged it.

The Havana Syndrome was a godsend for Trump in December 2016, as a timely prelude to what his policy towards Cuba would be, which today, five years later, remains on the table. Biden has maintained Donald Trump’s Cuba policy despite presiding over a Democratic government radically opposed to the previous Republican one. Biden promised during his campaign that he would try to reverse Trump’s failed policies, which cause harm to Cubans and their families, and because they have done nothing for democracy and human rights.

Fernández de Cossío, who, according to references, is an intelligent and very capable man, must have had powerful reasons for having made that televised call to Biden regarding diplomatic relations between Cuba and the United States. Maybe time will reveal them.

But Biden has not only kept Trump’s Cuba policies intact but also seems to be closer to the “regime change” policy than the “thaw” policy carried out by President Obama, with Biden himself being his vice president. Probably taking advantage of the complex economic situation in Cuba is encouraging him to carry out the policy that his government has followed until now.

We know of the natural arrogance of American exceptionalism, and also of its notable mistakes in international politics, mistakes that the weakest have paid for up to now, due to the immense wealth and resources of the United States. The multipolar world begins to form with chisel and hammer in Eastern Europe and the Ukraine, in the South China Sea and Taiwan. What will end up being the zones of influence of each pole when the battles are over? It is a question as important as it is impossible to answer now. Cuba has to strengthen its economy quickly and without pause, in order to continue being sovereign.

It is a known fact that international relations are more or less fair, but always far from the moral standards we human beings try to live. Appealing to the ethical coherence of a president to change his policies seems almost as unlikely to me as driving a train from a telephone.

An ethical principle from Joseph Biden, which appears in his 2014 book Promise Me, Dad, says that large countries shouldn’t strike smaller ones, especially after they’ve given their word not to.

It will be necessary to remind him.

1 There are about twenty cases not clarified by the CIA