The cancellation of flights to the interior of the island has forced all actors involved in travel to adapt and design new ways to meet the high demand. 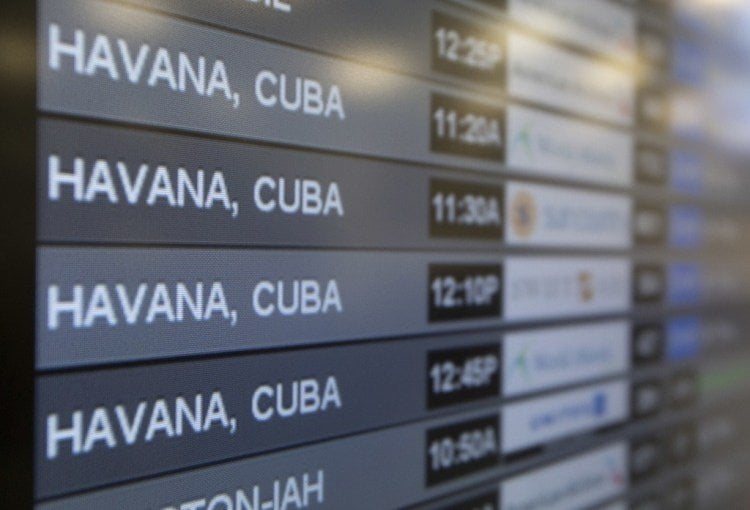 U.S. airlines may no longer be traveling to the interior of Cuba, but despite this, the movement of passengers at the Miami airport does not seem to have decreased. Charter flights have now occupied that market niche and have filled that need with the increase in the number of flights.

“We are responding to the need of the public who on these holidays, as on previous ones, travels en masse to Cuba. From here to the end of the year all flights have been sold out,” Mireya León, flight dispatcher of one of the charter companies, told OnCuba. And the source explains that they have even sold in advance the seats that are usually set aside for passengers with last-minute emergencies.

Since commercial flights to Cuba opened in mid-2016, charter companies suffered a downturn, difficult to quantify because they don’t report detailed figures, and lost customers because U.S. airlines lowered prices in many cases by more than 50%.

Although the ticket prices for Christmas tend to increase due to the high season, even with the absence of commercial flights to the interior of the island, the trip for many Cubans living in South Florida was made more bearable.

“I started doing calculations and I realized that if I traveled to Havana and from there to Villa Clara it was going to be more expensive than paying a little more now and traveling directly to my home in Santa Clara,” explains Valentín González, a passenger traveling with his wife and a daughter.

According to passengers who recently arrived from the island, taxi drivers in Havana have almost doubled the prices of trips to the interior of the country. For Santa Clara they would be charging about 300 dollars and they have discovered a byproduct of that service, which is common in many countries, but not in Cuba: some charge separately for the transportation of luggage.

“They have told me that they are doing it, but I don’t know for sure. That’s why I’m taking a little extra money,” González emphasizes.

In any case, in this line the travel agencies, which traditionally book hotels and rental cars, now also ensure taxi service to the interior that is paid in Cuba, not in Miami. “There is still little taxi traffic through us, but it is increasing,” explains León.

The nuisance of travel from Havana to the interior of Cuba is a stumbling block created by the limitation that the Donald Trump administration has imposed on American airlines to travel only to the capital, when until recently they did so to about six airports throughout the island.

At the end of October, Washington announced the ban that came into effect on December 10 only for commercial airlines. Charters were not affected by this measure and now have the virtual monopoly of flights to the interior of the country.

On December 11 the boarding of passengers, both on charter and commercial flights, was almost normal. The latter were also full and an American Airlines employee confirmed that they take off full, but to Havana.

“In Cuba our operation is full. We had to hire more staff to process the return flights because now the lines are going to be huge,” she explains without identifying herself because she doesn’t have permission from the airline to speak.

Although there were no extraordinary delays in flights to Cuba, commercial airlines had to open more dispatch desks due to the increase in passengers, because the flights also increased. American now flies nine times a day to Havana. There are at least two flights that leave almost simultaneously.

Charter flights resolved the increase in passengers by renting more planes, but created an additional problem by asking passengers to show up five hours before the flight. That is, the passenger spends even more time on the ground than in the air. Before they had to show up four hours in advance and to this we must add that many times the freight does not accompany the passenger, but travels on a separate flight for that.

In the middle of the conversation an interesting fact emerges. This new situation has served to determine with some rigor that half of the transfer of passengers to the island flies to the interior of the country, as confirmed by a dispatcher. And, since it’s on a Christmas holiday, the freight also increases.

“People are carrying a lot of gifts and goods for the home. They are taking TV sets, refrigerators, microwaves, car parts, but in large quantities,” she explains.

This represents a gold mine for airlines, but especially for charter companies. “The prices are the same as always, but people are transporting more. It seems that the ‘mules’ have not given up despite the new restrictions both here and there,” says León. The United States has limited the amount of remittances and Cuban customs have put in practice new restrictions.

However, despite the limit of remittances to 1,000 dollars per quarter, at the Miami airport nobody has to declare how much money they are taking to Cuba. León explains to OnCuba that the U.S. customs authorities are not controlling this aspect. And since there are no freight restrictions, at least the barrier that was intended to punish Cuban families remains lifted.

A passenger says that they may not have noticed the detail but maybe “they’ll also start seeing to that soon.”

Apart from that, the atmosphere is the same as always. In the flights that leave at dawn, someone always appears with coffee and some guava pastry or croquettes, which ends up giving the feeling that without even taking off, they’ve already reached the island.