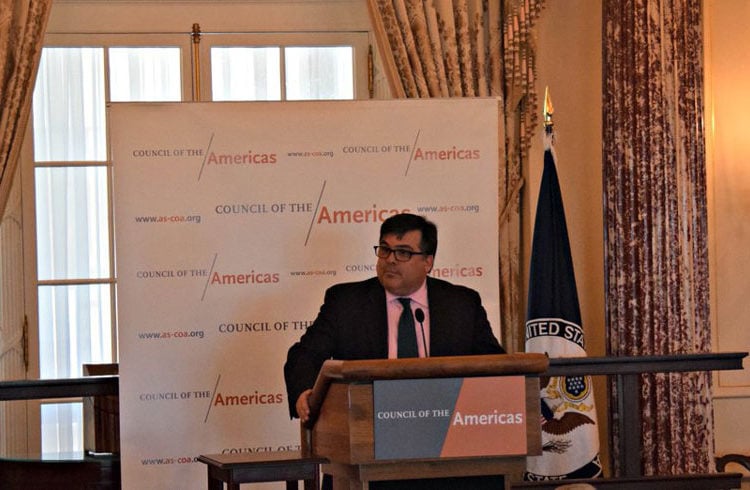 The Trump administration statements about its possible position with respect to Cuba have come bit by bit. In more than 100 days in the presidency, the New York magnate has barely said anything about the island and his officials seem to alternate every now and then to indicate that the subject is still in the agenda.

Now it was Acting Assistant Secretary of State for Western Hemisphere Affairs Francisco Palmieri’s turn. This Tuesday, in the America’s Conference held annually by the Department of State, Palmieri confirmed that his government is still making a “complete review” of its Cuba policy.

White House spokesman Sean Spicer had announced this after Trump had hinted during the electoral campaign about the possibility of reversing the “thaw” initiated by Barack Obama. However, this time Palmieri went further.

“As we move forward with that review, I suspect that there will be important differences in how this government plans to address the situation in Cuba,” he said taking as a point of comparison what was done by the previous administration. The cornerstone of those differences, according to the official, is the issue of human rights.

“One of the areas that is going to be a great priority will be to ensure that Cuba makes more substantive progress towards greater respect for human rights within the country. That is certainly an area where we will see greater emphasis when the review is completed,” Palmieri affirmed.

His words emphasized what was previously said by Spicer, who had affirmed that President Donald Trump is committed to an agenda that guarantees human rights, which gives priority to the issue in future relations with the island.

HUMAN RIGHTS ON THE TABLE OF NEGOTIATIONS

The issue of human rights has been one of the most sensitive on the agenda between Cuba and the United States. After a round of talks held in October 2016, both parties recognized “the deep differences” existing with respect to the focuses and concepts about the exercise of human rights.

In their press release, the Cuban representatives recalled then that the island is part of 44 of the 61 international instruments recognized on the issue of the protection of human rights, “while the United States has only assumed obligations with 18 of these instruments.”

Meanwhile, Assistant Secretary of State for Democracy, Human Rights, and Labor Tomasz Malinowski, who headed the U.S. delegation, coincided with his Cuban counterparts on the need to have civilized relations regarding the recognition and respect for those differences and commented that issues like arbitrary arrests, the registry of NGOs in Cuba and elections, among other issues, had been dealt with “seriously and in detail” during the talks.

CUBA AND OBAMA, CUBA AND TRUMP

After the December 17, 2014 announcements and the start on the road to normalization, after half a century of political and diplomatic tensions, the embassies were reopened in Washington and Havana, and some 20 agreements have been signed by both governments.

Obama also gave a boost to packages of measures with the explicit intention that the opening toward Cuba be “irreversible.” Regular flights were resumed between the two countries and U.S. cruise ships started traveling to the island.

However, Trump’s arrival to the White House and the position against the rapprochement of a group of lawmakers – several of them Cuban Americans – has generated uncertainty about the future of bilateral relations.

The Republican president even tweeted after his election that if Cuba is not willing to make a better deal for the Cubans, the Cuban Americans and the United States will jointly finish the deal.

More recently, in mid-April, U.S. Ambassador to the UN Nikki Haley included the island among the countries where human rights are extensively scorned.

However, there are many voices in the United States that back the continuation of the talks. In February, a delegation of lawmakers from both parties on a visit to Cuba said to the press that, in their opinion, progress in relations between the two countries “is inevitable.” One of the visiting Congressmen, Senator (D) Patrick Leahy, said then that is it impossible to return to “a 50-year failed policy.”

In April, while in Havana, Mississippi Governor Phil Bryant urged President Trump to resume the negotiations begun by the previous administration. And, a while later, a group of high-ranking retired U.S. military also urged their government to do the same.

“Cuba’s location in the Caribbean and proximity to the US make it a natural and strategically valuable partner on issues of immediate concern, including terrorism, border control, drug interdiction, environmental protections, and emergency preparedness,” the military wrote in a letter coordinated by the non-party organization American Security Project (ASP).

On May 1, a New York Times editorial dealt with what it called a “quieter” debate about Cuba in the White House, in which – together with a current that wants to reverse what Obama did – it pointed to the existence of a large pro-engagement coalition made up by lawmakers from both parties, intellectuals and young Cuban Americans that are asking the president to continue building on the foundation of engagement it inherited.

This is a position shared by U.S. farmers and businesspeople, eager to position themselves in a market that is opening to foreign investment and global trade. As well as by a large number of Americans who, even when they can’t travel to Cuba as tourists due to the blockade laws, continue visiting the island.

In the first quarter of 2017 the number of travelers from the United States to Cuba registered a 118 percent increase.

The Cuban government, meanwhile, has been cautious in its statements about the current administration. In January, a short time after Trump’s inauguration, President Raúl Castro confirmed Havana’s will to continue with the new U.S. president the “respectful dialogue” and cooperation on issues of common interests.

“Cuba and the United States can cooperate and coexist in a civilized way, respecting the differences and promoting all that which benefits both countries and peoples,” Castro said then, although he reaffirmed that “it should not be expected that for this Cuba should make concessions inherent to its sovereignty and independence.”

This Wednesday, another prominent voice from the island, Havana cardinal archbishop emeritus, Jaime Ortega, said in Madrid that he does not believe there is an interruption in the dialogue between Cuba and the United States under Trump’s presidency. Ortega, who is in Spain to promote his book “Diálogo, encuentro, acuerdo” and to present a foundation to back Cuban entrepreneurs, backed the opening between the two countries, although he recognized it is going “a bit slowly.”