Cubans have always been hospitable and lovers of shows and soap operas. And as courteous as they are emotional, to the point that today they are the only passengers who applaud the pilot when the plane they are traveling on from Miami lands on the Rancho Boyeros runway. 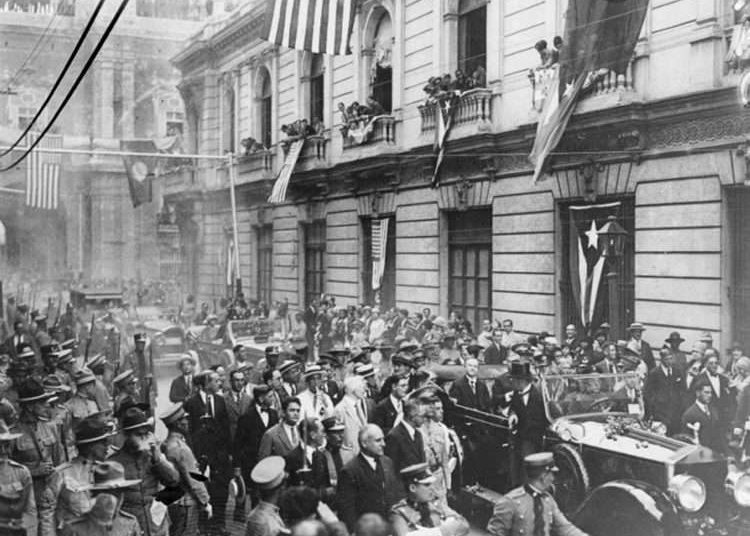 During the first three decades of the 20th century, U.S. presidents were not characterized by traveling to Latin America, a natural backyard in the context of the Monroe Doctrine, but populated by situations and characters that they thought they knew because they were similar in the south of the Union, in an area emblematized by Louisiana and Mississippi, since then among the poorest and most backward; legacy of the plantation economy. The press of the time characterized the former as in tune with a shared imaginary, as it did with its Caribbean neighbors and those south of the Rio Grande: dark-skinned, childish, and uncivilized people eating melons on public streets between the condemnatory and mocking gaze of Uncle Sam or the descendants of the Mayflower.

Indeed, a summary review of his trips abroad reveals that between 1906 and 1920 his few incursions into the subcontinent were marked by global strategic interests, among which a five-letter word clearly stands out: Canal. In 1906, Teddy Roosevelt (1901-1909) planted his figure in Panama; three years later, William Taft (1909-1913) appeared in the area — and later, in Mexico. Woodrow Wilson (1913-1921) never even went down South, but he was from the waist up: twice in the UK, four times in France, once in Italy, once in Vatican City and once in Belgium. To follow the rhyme, in 1921 Warren Harding (1921-1923) visited the Canal. The other two times he left the country he went to the UK and Canada.

Republican John Calvin Coolidge (1923-1929), an Amherst College graduate whose administration some historians attribute a controversial sense of isolationism, never left the Union territory except to travel to Cuba in 1928 (the other was for his honeymoon in Canada, so close to his native Vermont that it hardly counts as a trip abroad). One of those responsible for the fact that the banana went from being an exotic fruit to a daily presence in the U.S. markets, largely by the work grace of the United Fruit Company, the same company that built roads, railways and a famous port in Guatemala, but that, among other singularities in history, would end up dethroning the nationalist government of Jacobo Arbenz.

Under Coolidge, a staunch supporter of laissez faire, U.S. direct investment in Latin America rose from $1.26 billion in 1920 to $3.55 billion in 1928, an expansion of the asymmetric and dependent scheme encouraged by his predecessors, notably Teddy Roosevelt, the man from the Rough Riders of the Colina de San Juan, back in Santiago de Cuba. During his mandate, the military occupations of Haiti (1915-1934) and the Dominican Republic (1916-1924) continued, apart from intervening in internal political processes in Panama and Nicaragua.

In 1927, his administration ordered something unprecedented in Latin America: the bombing of El Ocotal by the U.S. air force against the forces of Augusto César Sandino. The president and his secretary of state, Frank B. Kellogg, made a contribution to political thought that almost nobody remembers today, although it was later replicated: looking for the causes of the regional insurgency not in endogenous factors, but exogenous, in this case in the “Nicaraguan-Mexican-Bolshevik conspiracy” to take control of an area very close to the Panama Canal. Historians say that Stalin’s diplomacy, which was like saying the fearsome Cheka, answered them as follows: “The Soviet government has no more interest in Nicaragua than it has in the moon’s mountains.”

Coolidge arrived in Havana in January 1928, venue of the Sixth International Conference of American States, in the midst of a clear discomfort with the big stick, which in fact he gave continuity to. Said loud and clear, he did not go to Cuba for himself, but rather to try to appease the attending dignitaries, both through his own sticks and the previous ones. And he did it with Sandino in Las Segovias with his crazy little army, as Gregorio Selser once called it. In other words, he touched the island almost at the end of his administration, according to some to pave the way for the “good neighbor” policy of Franklin D. Roosevelt (1933-1945).

Actually, this is not exact. The man who would succeed Coolidge in the White House, Herbert Hoover (1929-1933), was the one who coined the expression “good neighbor” when he undertook a “goodwill” tour of Central and South America in 1929 on the USS Maryland based on the new consensus among ruling elites on relations with Latin America. No more Marines. “Latin Americans,” writes one scholar, “then had to understand the difference between ‘intervene’ and ‘interpose.’” Roosevelt and his advisers only appropriated the concept and developed it as the basis of their policy towards the region.

President Coolidge traveled with his wife and his entourage on the presidential train from Washington DC to Key West, where they boarded the USS Texas, which would anchor in the port of Havana on January 15. The first and only time that a president of the United States set foot on the island, a spell that was broken on March 20, 2016 after eighty-eight years with the visit of Barack Obama. Amity Shlaes, one of his biographers, wrote: “thousands of people climbed on the Castillo del Morro and on the roofs of the buildings raising their necks to see the USS Texas when she entered the bay.” According to several chroniclers, he was received with cannon salutes and “with that enthusiasm that is born from an intense Latin nature.” The New York Times went further, reporting the visit in a dispatch dated January 16, 1928: “It was the most cheerful and happy welcome received by someone on this green Caribbean island.” Nothing strange. If you look closely, Cubans have always been hospitable and lovers of shows and soap operas. And as courteous as they are emotional, to the point that today they are the only passengers who applaud the pilot when the plane they are traveling on from Miami lands on the Rancho Boyeros runway.

In his speech in Havana, Coolidge seemed to start off on the right foot: “Thirty years ago,” he said, “Cuba ranked as a foreign possession, torn by revolution and devastated by hostile forces,” but he immediately tripped over something and ran off. the focus: “Her people are independent, free, and prosperous, peaceful, and enjoying the advantages of self-government.” He spoke to the Cubans as if there had never existed a constitutional appendix called the Platt Amendment, to which a Cuban poet alluded in his “Mensaje lírico civil,” and they had not intervened militarily with the purpose of contributing, once and for all, to the self-government that those local motherfuckers hadn’t quite given birth to, that label of the infernal little Cuban republic of the first Roosevelt that now, suddenly, the blue-eyed visitor cast aside. And he closed his words with a flourish: Cuba was “a complete demonstration of the progress we are making,” enunciated not at all strange in a president known for being a man of few words and an enemy of long speeches, which almost always ends giving rise to severe errors of omission, to say the least. According to Peter Kornbluh, “Coolidge’s speech was full of empty rhetoric and did not project a real break with the past in terms of the malevolent designs of the United States in Cuba and the rest of the region.”

This has been the case for many of the perceptions about Cuba due to ignorance, hegemonic presumptions, diplomacy or convenience. Five years later, in 1933, those same independent, free, prosperous and peaceful Cubans would end up overthrowing the host of the Sixth Conference, Gerardo Machado y Morales, putting him on a plane headed for the Bahamas and eventually making him one of the two Cuban presidents buried in a Miami cemetery.