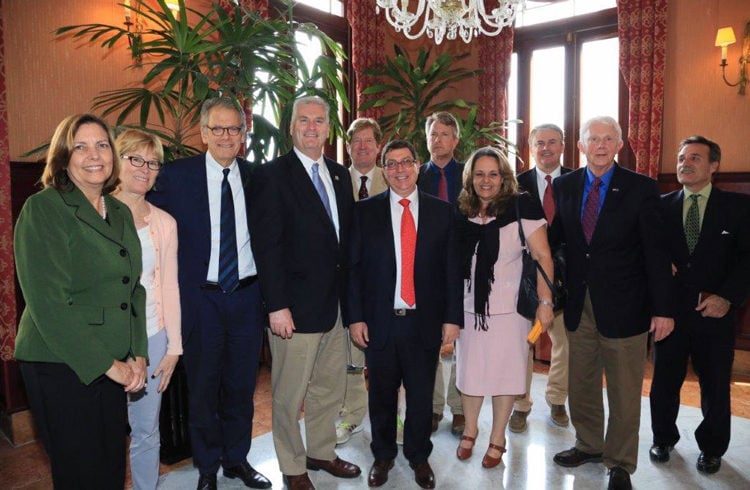 The delegation is made up by Republican Representatives Tom Emmer and Jason Lewis, both from Minnesota; Roger Marshall, from Kansas; James Comer, from Kentucky; and Jack Bergman, from Michigan.

Rodríguez and the U.S. lawmakers “dealt with issues of interest to both countries,” as is common in the Cuban Foreign Ministry’s press releases.

Present at the meeting were Josefina Vidal and Gustavo Machín, director and assistant general director for the United States at the island’s Foreign Ministry. Jeffrey DeLaurentis, chargé d’affaires of Washington’s embassy in Cuba, also participated for the U.S. side.

On that occasion, the legislators met with President Raúl Castro and with several ministers, including the foreign minister. In addition, they toured the Havana Capitol Building and participated in the signing of two memorandums of understanding between the Cuban government and the southern ports of Pascagoula and Gulfport.

This time the principal novelty lies in that all the members of the visiting delegation belong to the Republican Party, which today is holding the U.S. presidency and the majority in Congress.

Although the so-called Grand Old Party has traditionally been more reluctant to relations with Cuba, several of its congress people have shown themselves in favor of maintaining and even increasing the agreements reached between the Obama administration and the Cuban government.

This position mainly rests in the commercial perspectives that many Republican-based states would have if the links with Cuba were consolidated.

Despite this, President Trump has questioned his predecessor’s agreements with Havana and White House spokesman Sean Spicer has publicly said that the Cuba policy is currently under review.

Up to now the Cuban government has been cautious in its statements about relations with the United States under the presidency of Donald Trump.

In his first reference to this after the U.S. presidential change, at the 5th Summit of the Community of Latin American and Caribbean States (CELAC), Raúl Castro confirmed “Cuba’s will to continue negotiating with the United States pending bilateral affairs, based on equality, reciprocity and respect for sovereignty.”

He also said that the two nations “can cooperate and coexist in a civilized way, respecting the differences and promoting all that which benefits both countries and peoples.” But he reaffirmed that “for this it should not be expected that Cuba make concessions inherent to its sovereignty and independence.”

However, this Sunday at the Extraordinary Summit of the ALBA-TCP, held in Caracas, the Cuban president tuned up the tone a bit, although he did not speak directly about the talks between the two countries.

In Venezuela, Raúl Castro said that “the agenda of the U.S. government is threatening to unleash an extreme and egotistical commercial protectionism,” he criticized the deportation of “migrants generated by the unequal distribution of wealth” and pointed out that the wall that Trump aims to build on the border with Mexico is an expression of “that irrationality, not just against that sister country, but rather against our entire region.”

“Poverty, disasters, migrants are not contained with walls but rather with cooperation, understanding and peace,” Raúl affirmed in a speech that, even though it confirmed Cuba’s traditional position about U.S. policies with Latin America, left the door open for diplomatic solutions.