During the Spanish-Cuban-American War, Tampa would go down in history for becoming the boarding point for troops to the island. 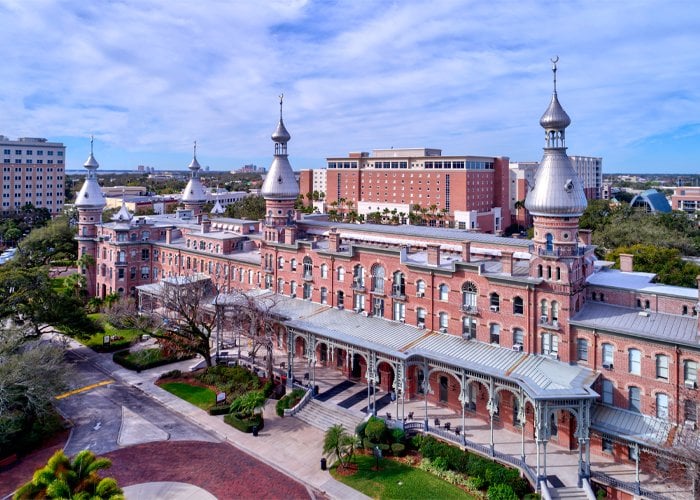 The trains and steamboats of Henry Bradley Plant (1819-1899) would forever alter the face of Tampa, taking it from drowsiness and swampland to modernity in record time. Towards the end of the second half of the 19th century, new businesses and markets flourished. The fishing industry diversified and expanded its scope. The phosphate mines increased their production and shipped it far beyond its borders. Turned into two important cigar manufacturing centers, Ybor City and West Tampa took roots in that system of trains and ships to place their products in the national and world market.

In this expansive process, the Tampa Bay Hotel was a kind of crowning point. In 1888 Plant bought land near the Hillsborough River to build a large hotel and begin to develop the tourism industry in the area, by then practically connected to the entire Union. Completed three years later, in 1891, the new building — spectacularly modern for its time — was built at a cost of more than 2 million dollars and 500,000 in furniture and works of art carefully selected and brought from Europe. A huge five-story high facility with over 500 rooms with private bathrooms, electricity and telephones. Quite a leap in the American hotel industry of the time, at the height — and sometimes beyond — of New York and other large cities. And as if to underline it loud and clear, it had the first elevator in Florida.

Inspired by the Alhambra Palace in Granada, but absolutely eclectic, the hotel’s walls were over a foot thick. It was built of red bricks, like the cigar factories located not too far from that area bordering the river. At the time, Plant was changing much of the railway system from narrow gauge to standard gauge, so the steel used in its construction was from discarded rails.

The hotel was overflowing with amenities and facilities. It had a grand lobby, restaurant, music room, barber shop, beauty salon, writing and reading room, and telegraph office. Guests could enjoy other modern facilities such as a golf course, tennis courts, a pool hall, a casino with capacity for around 2,000 people, a horse racing track and even hunting grounds….

But in 1898 its destiny would change for a short time. After the explosion of the battleship Maine in Havana Bay on February 15 of that year, and the subsequent declaration of war on Spain by Congress and President McKinley, on April 28, Tampa would go down in history for becoming the boarding point of U.S. troops to Cuba due, precisely, to its geographical location, its deep-water port, its connection with the national railways and Plant’s lobbying with the power structures.

The army set up seven camps in the area and turned the Tampa Bay Hotel into a place of residence for the officers, who from their armchairs conceived the strategy to follow against the new enemies. That of 1998 was that splendid little war of only ten weeks by Secretary of State John Hay that, in fact, culminated in the debacle of the Spanish navy in the bay of Santiago de Cuba, led by Admiral Pascual Cervera, in reality a suicide assisted by the manifest inferiority of the warships and the technique of the decadent colonial power.

Generals Joe Wheeler, John B. Gordon, Fitzhugh Lee and Nelson A. Miles were among the protagonists of this process of warring against Spain from the Tampa Bay Hotel. There was also a colonel named Leonard Wood (1860-1927), future military governor of Cuba, and governor-general of the Philippines. This military mobilization had the peculiarity of being the first foreign operation conducted by the army since the American-Mexican War of 1847, based on Manifest Destiny and which ended on February 2, 1848, with the signing of the Guadalupe-Hidalgo Treaty: Mexico yielded half of its territory to the United States in exchange for 15 million dollars.

Among other historical figures who traveled through and around Tampa at the time was a young officer named Theodore “Teddy” Roosevelt (1858-1919), who at the end of May 1989 camped near the hotel with his Rough Riders while his wife stayed in its rooms.

Having landed in Santiago de Cuba, Roosevelt and his comrades-in-arms — athletes, cowboys and miners — intervened in the battle of Loma de San Juan on July 1, 1898, one of the “most notorious” myths in American history for the overtones of heroism against the Spanish troops, made possible largely by the work of Roosevelt himself as a writer and by the subsequent recreations of those events, filmed in tessitura with the stories of the Old West against the natives. His cavalry troops had to fight on foot because they had left their horses behind at the Tampa barracks due to logistical problems.

In the spring of 1898 military brass bands played in the hotel at night. It is said that the gentlemen and ladies danced both in the rotunda and in the ballroom. But among those who watched from the balconies with mahogany railings were Cuban girls who, according to oral tradition, swore never to dance again “until Havana was free.”

Upon Plant’s death, the hotel functioned with ups and downs until 1932, when it was swallowed up by the Great Depression. At its best, it received visitors and jet set figures, including baseball player Babe Ruth (1895-1948), Russian ballerina Anna Pavlova (1881-1931), and French actress Sarah Bernhardt (1844-1923). As well as politicians like William Jennings Bryan (1860-1925), three times Democratic candidate for the presidency of the United States, and President Grover Cleveland, the only one to serve two terms non-consecutively (1885-1889 and 1893-1897) in U.S. national history.

In August 1933, the Tampa Junior College became the University of Tampa, and since then the hotel built by the old entrepreneur has been its headquarters. Today it is listed on the National Register of Historic Places and is a National Monument.