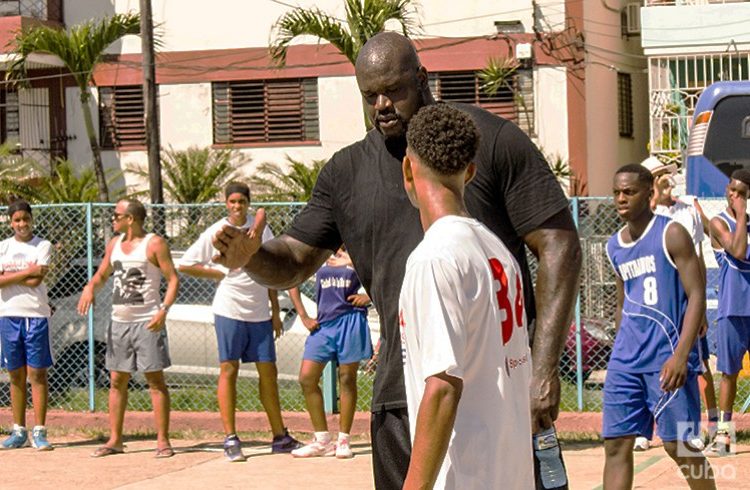 The National Basketball Association (NBA) is back in Cuba. A year and several months after its first visit to the island (for the occasion of which Mutombo and Steve Nash headed up the committee), the American entity has returned along with Shaquille O’Neal to hold instructive clinics with children and young Cuban players.

A week after the curtain fell on the NBA’s season in the USA the State Department made the communique in which is announced the arrival of O’Neal in Havana and his stay of three days official. The visit had only been announced by President Barack Obama months before.

The first of these clinics that Shaquille O’Neal will give in Cuba took place in the court on 23 and B in Vedado. On the morning of that Sunday the ex-pivot that shone with Orlando Magic, the Los Angeles Lakers (three champion’s rings) and Miami Heat (one ring), coached the members of male and female teams of the children’s leagues of Havana, for an hour.

Under a potent sun, Shaq and Kaleb Canales – current managing assistant of the Dallas Mavericks team did not stop giving instructions to the players. First, the basis: get used to dribbling with small obstacles in the way. Then attack the basket with O’Neal as the defence. And to finish, shooting the hoop, stopping and shooting from the throw line.

The coach Canales, of Mexican heritage, entered NBA history four years ago. When he took over the reins of the Portland Trail Brazer when he was only 28 years old, making him the youngest director to take over the franchise.

Regarding the new visit, he commented: “Basketball is one of the most loved sports for Americans and because of this so many citizens have the aim of taking it to the whole world. We want to share our culture and that’s why we’re here. Shaq is one of our ambassadors, he has been one of the greatest players that has passed through the NBA’s grounds and now he’s in Cuba to being us closer.

Minutes after talking to coach Canales, they begin who different practice games in the two courts of 23 and B, mixing men and women in the same teams. Shaquille was an arbitrator and instructor.

After leaving the sports ground, Shaqulle O’Neal smiled for a while posing for the cameras and said to the press: “I am very happy to be in Cuba, to share with you, who are really optimistic and tenacious people. We are here to give a helping hand to basketball and to support it. You can count on Shaq.”

The company Eductional Travel Alliance (ETA) is one of the main sponsors for the trip. Michal Eizenburg (president) and Katherine Rice (executive vicepresident) told us that this time round the donations won’t be as pronounced as those in April 2015, this group is smaller. However, they left some sports vests and basketballs behind for sports practice.

The ETA directives inform us that the previous night (the day on which the group landed) the US ambassador in Havana, Jeffrey DeLaurentis opened the doors of his residence to the delegation with a cocktail reception. Antonio Becalli, president of INDER also attended, along with various legendary figures from the worlds of basketball and baseball in Cuba, and officials from the Cuban Ministry of Foreign Affairs (MINREX).