Trump: “We’re going to get Cuba worked out properly”

In an interview with Telemundo, President Trump thought he had been "tough" on Cuba and Venezuela, and threatened more. 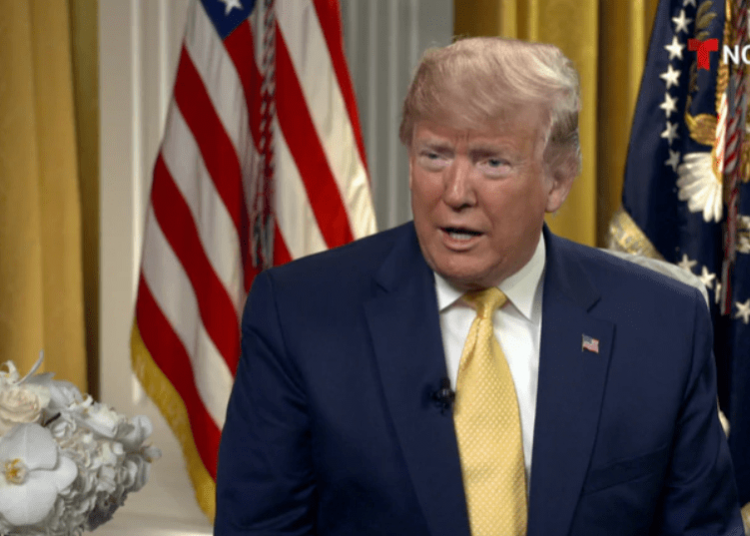 During an interview this Thursday with the Hispanic channel Telemundo, Donald Trump thought he had been “tough” with Cuba and Venezuela and threatened even “tougher” policies.

He maintained he would be different from the eleven administrations that preceded him in the White House since the Revolution triumphed in 1959.

“I’ve been very, very tough on Cuba,” Trump said. “We’re going to get Cuba worked out properly. Not the way Obama did it, which was a disaster.”

On Venezuela, he said he has also been “very tough,” but he insisted that his government hasn’t been ” tough enough” in its objective of deposing Nicolás Maduro as president.

The president said that if you look at what is happening in Venezuela, it’s horrible and that Cuba is the cause of the problem to a large extent, with 25,000 troops there, and he added that his administration is imposing sanctions on Cuba, that cruise ships can no longer go there. He emphasized that Cuba will have to straighten up.

Trump, interviewed by Cuban-American journalist José Díaz-Balart, said he “loves” the Cubans in Miami and the Venezuelans in Doral. The people of Venezuela are great, but they have been decimated by two horrible characters (referring to Hugo Chávez and Nicolás Maduro).

Trump was confident that his “toughness” on Cuba and Venezuela will allow him to win the sympathy of voters in Florida and again win this key state in the 2020 elections.

On Mexico, the president said that “this week” he considers the neighboring country as a “friend” since it is doing “a great job” after the signing of the migration agreement.

He affirmed that Mexico has 6,000 people on their way to the border, troops, and that they are doing a great job, to date they have done a great job, said Trump.

He added that they have complied with the agreement and if they weren’t doing it, he would impose tariffs.

The president said he was willing to meet with his Mexican counterpart, Andrés Manuel López Obrador: “He’s great,” he said. He also mentioned his “good relations” with the governments of Mauricio Macri in Argentina and Iván Duque in Colombia.

Trump also addressed in the interview his threat to deport “millions” of immigrants starting next week, and affirmed that Latino voters support that measure.

He said Latino voters want him to do it, that they don’t want to lose their jobs, they want to keep their salaries, wage raises, and they don’t want crime. He added that when people enter (the country), the MS-13 (Mara Salvatrucha gang) enters.

The journalist reported by saying that “the mothers who come with their children are not members of the MS-13,” to which Trump replied: “If there is one (gang member) out of every 100 (immigrants), it is too much.”

About Bernie he said he seems to have had it, adding that Bernie looks crazy, but he’s always looked like that, but he looks like a tired crazy right now.

On Biden, a favorite according to polls, Trump said he is exhausted and he’s doing nothing, he’s not working.

If I’ve learned something about this job, it’s that in order to do it well, and I have been doing it well, you have to work hard, he said.

When the journalist finished, he tried to get Trump to make an evaluation of his mistakes, and he only mentioned “I put a couple of people in that I shouldn’t have put in” without giving further details.

“Do you sleep well?”

And Trump answered that he doesn’t have much time to sleep and fortunately he’s never slept too much, adding that, however, he does sleep well.

No planned “power cuts” in Cuba for this summer