The Executive has decided to keep commercial flights because they are usually used by Cuban-Americans to visit their families on the island. 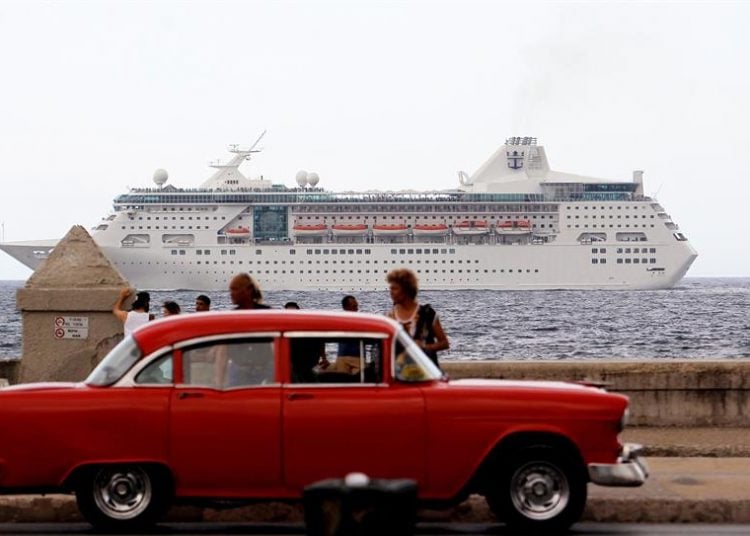 Archive photo from May 22, 2017 shows a cruise ship with tourists passing in front of Havana’s Malecon (Cuba). The U.S. government announced today that it will ban cruise trips to Cuba, which is a major blow to the Cuban economy and to that thriving industry that had grown since the thaw started in 2014. EFE / Ernesto Mastrascusa

The U.S. government announced this Tuesday that it will prohibit cruise trips to Cuba, which is a major blow to the Cuban economy and to that thriving industry that had grown since the thaw started in 2014.

The State Department specified in a press release that the “United States it will not allow visits to Cuba through passenger vessels and recreational vessels, including cruise ships and yachts, as well as private and corporate aircraft.”

Despite the new restrictions, commercial flights may continue to operate between the U.S. and Cuba.

A spokeswoman for the State Department explained to EFE that the Executive has decided to keep commercial flights because they are usually used by Cuban-Americans to visit their families on the island, while cruises are used for sightseeing, something legally banned for Americans.

Specifically, that source indicated that the U.S. has decided to prohibit visits on cruise ships and yachts, as well as private and corporate aircraft to prevent “the Cuban regime and its military services, which control the tourism industry in Cuba, from having access to U.S. dollars.”

In Cuba, many of the hotels are owned by companies controlled by the Armed Forces and managed under a joint venture regime by foreign corporations, such as the Meliá group, based in Spain.

The Department of Commerce had indicated in a statement that the measure would take effect today; but then it updated that note and explained that it will begin to be applied tomorrow, June 5.

In the meantime, the U.S. government announced today that, starting June 5, Americans will be banned from group people-to-people educational travel to Cuba which had made it possible for thousands of people to visit the island since the thaw started in 2014.

“Travel restrictions do not affect family visits, trips to support the Cuban people, humanitarian trips, academic exchanges and some other categories. By eliminating certain means for ‘veiled tourism,’ we are limiting the funds that the Cuban regime can draw from American travelers to use them to repress their own people,” said a spokesman for the State Department for Western Hemisphere Affairs.

“We encourage travelers to stay in private homes when they travel to Cuba and to frequent restaurants and private establishments, to ensure that their funds do not support the Cuban regime, but that they support the Cuban people…. The United States intends to induce the Cuban government to change its detrimental behavior towards its own people and the region, including Cuba’s exit from Venezuela. The U.S. sanctions support this objective. U.S. companies must end all transactions conflicting with the U.S. sanctions against Cuba,” he added.

The rapprochement promoted by then U.S. President Barack Obama and his Cuban counterpart, Raul Castro, facilitated travel to Cuba and gave a business-boost to airlines and cruise companies that started making commercial trips between the two countries.

The government of U.S. President Donald Trump alleges that the new restrictions seek to address Cuba’s “destabilizing role” in Latin America, especially with its support for Venezuelan President Nicolás Maduro and his Nicaraguan counterpart, Daniel Ortega.

Since he arrived in the White House in January 2017, Trump has tightened the policy towards Cuba with reductions of diplomatic personnel, the activation of a law that allows filing lawsuits in U.S. courts for property expropriated after the Revolution and sanctions on hotels on the island, increasing the scope of the economic and commercial embargo.

According to a study by the U.S.-Cuba Economic and Commercial Council, cruise lines would have accumulated more than 761 million dollars in gross revenues between 2017 and 2019 by transporting more than 570,000 passengers.

Figures from the Cuban government show that 142,721 Americans arrived in Cuba on cruises between January 1 and April 30, more than the 114,832 that came by plane.