"It would be absurd to take time off from music, creativity or the Cuban socio-cultural scene to talk about politics." 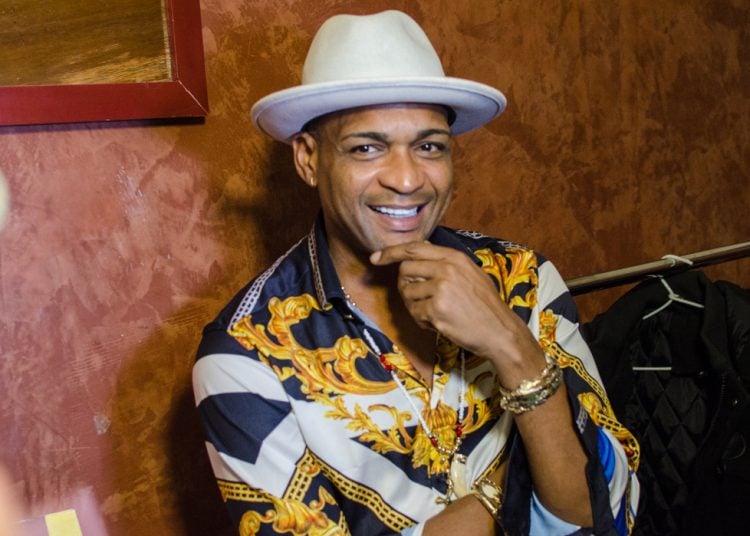 Before leaving the Miami airport, in the last waiting lounge, composer, guitarist and producer Descemer Bueno (1971) broadcast on Facebook to his followers notifying them that he was traveling to the south. “The next stop is Buenos Aires, Argentina. La Trastienda. Friday, May 31,” he said.

The next day, at the Eizeiza Airport, the girls from the “Nos fuimos lejos” fan club, which is presided over by Cecilia Quiroga in the Autonomous City of Buenos Aires, received him, but a virtual crowd welcomed him or wished him a wonderful stay from the networks.

On the other hand, Descemer Bueno hadn’t set foot in this city since he did it with Santiago Feliú. “I have so many memories of when I came with Santiago…. And now I see myself in this place where he had a lot of followers,” he says, sitting on the furniture of an apartment on Medrano Street.

It was the day of receiving the press. This conversation happened then, 24 hours before his concert in La Trastienda.

He has given enough details of his trip to perform for the first time alone and it is already night.

Cold night, and after going to get a sweater, when it’s my turn, I ask him if he still has the custom of reading, precisely because I found out that Santiago Feliú prompted him to read.

Descemer Bueno responds that just as he no longer writes prose, as he did in the past, “however, the songs did not come out,” and neither does he read. “Reading helped me a lot, but also to understand his songs. Santiago was never easy. He was the most difficult of the teachers. He always said to me: ‘When you make an album, bring me the lyrics to check them.’ I looked like a student. Then there was a time when he started to find the Descemer Bueno of the multitudinous concerts and I imagine he felt proud,” he says.

Outside there are no journalists left, I was the last in line. He has received one after another, although his representative speaks of another meeting with the press at one o’clock in the morning. For a while longer I keep asking him about the years in which he used to come with Feliú, about his relationship.

“Santiago is still here, that’s why there are always plans to work increasingly more with his music. We got to compose together. We did a couple of songs. I even convinced him to make a song with Israel, from Buena Fe. The three of us were never anywhere together, but we did it. There’s the song, we have always wanted to record it, but we haven’t been able to yet. For the summer I think I’m going to have the video of one of his songs: ‘Ansias del Alba.’ It’s very important.”

“Why do you give so much importance to social networks?” I ask. “If you look at it well, I’m one of the few artists that’s further behind with the social networks. Artists such as Gente de Zona already has more than one million subscribers on Instagram and Facebook. This makes me participate in an accelerated race, with its pros and cons. There I have people who defend me tooth and nail and staunch detractors.”

“What bothers them about you?” I want to know. “I think that my exposition bothers them, that my exposition is not local. There are times when one is not intelligent enough in life and I’ve been used to get out of localisms, to reach a diaspora that does not even have to do with Miami, because when we think of diaspora we think of Miami, and really the other half is not there, and increasingly more. Precisely because of how difficult it is to get to Miami, because of the policy that uses certain mentalities that are not prepared to understand what is happening.”

I insist: “Has that policy affected you?” He responds: “Certain sectors of that policy, more drawn to the extreme right, try to use me insistently for something I do not belong to because I don’t know anything about it [about politics]. I would make big mistakes; I already made them in the past, I already apologized, but that doesn’t matter. It doesn’t matter that you apologize because there are always people who stir up the past, and they forget. It would be absurd to take time off from music, creativity or the Cuban socio-cultural scene to talk about politics, something with which people profit from.”

Between 2005 and 2006, all of Cuba learned about Descemer Bueno: “the son of Old Havana!” a sports narrator would exclaim. We met him thanks to the film Habana Blues, by Benito Zambrano, winner of the Goya prize. His musical work (along with that of Kelvis Ochoa and X Alfonso) left an indelible mark on the youth who saw that film.

But soon we started hearing his name more often. Not only because he was the person behind some Cuban performers, endowing them with a repertoire that would make them much more visible, but because still young, he himself seemed to have what is essential for composers of a genre that would give the impression of advancing to extinction: the bolero.

“My work as a producer, I think it’s done…I didn’t do much, but I did important things. For Cuba, what I did with Haydee Milanés, with Diana Fuentes, with Santiago himself, as arranger and producer; with Estado de Ánimo, Column B, which were based on instrumental music and contemporary jazz. There is the work with Fernando Álvarez, with Manolo del Valle, they are things that have been lost and I feel that I have to rescue them.”

“Why this interest of yours to recover songs and themes from the past?” I ask. And he says: “The bolero is a genre that is getting lost. I want to rescue the bolero. I’m almost reaching my 50s and however you put it I represent another type of music. I can’t continue making music for young people all my life. I’m in a more serious stage, although I’m still facing the same, even if it still looks good. That is very important now. The bolero, the songs, represent a lot for me.”

Because Descemer travels assiduously from Havana to Miami, where he resides, I think he could have two perspectives on Cuban music and I ask him to tell me about it. He tells me that he has contracts with Sony, which is why he has a lot of responsibility with the industry and this makes him compose and work according to it.

“But I have a Cuba with a radio, which is a lot,” he warns: “I also have to satisfy that audience. It’s an audience of songs. There’s a dichotomy. Cuba’s public asks me for the songs of yesterday, in Sony they want something else; but, there’s me, and I know what I want, and there’s also a commercial market where I always want to be in the lead.”

“Pablo and Silvio are the greatest, the heroes of contemporary Cuban music. Even Chocolate has felt the need to make a version of that music. For me it is very important that Chocolate have the sensitivity to approach a song by Silvio and to realize that, to look for new sources of melodies. That Silvio’s music has the transcendence of reaching him, with the time that has passed, is something to tip one’s hat to. Nowadays you can’t underestimate anyone, you can’t speak ill of the reggaeton musicians because they can surprise you.”

That’s the name of a fabulous San Telmo club through which so many good musicians from all over the world have passed. They say it’s the test before moving on to larger spaces like Luna Park. La Trastienda. May 31. 11:30 pm. 14 degrees Celsius.

“The idea came from a friend, David Morales, who worked with me many years ago in Cuba. He was the third producer I had. He came to live in Argentina, he has met a lot of people and now I’m here.”

And the door opened, and the bunch of Cubans came in and those in Argentina wanted to hear it, because they had already danced with that “Bailando” that is still heard from the car that passes by at full speed along the 9 de Julio or from the neighbor’s apartment. I testify to that.

Descemer Bueno appears around midnight on stage. Wearing a hat, colorful shirt, with a New York style; old-fashioned behavior, I say, because of the slow and sensual movements. He is accompanied by six musicians. Two Argentines and three Cubans, two of them residing in Buenos Aires, plus the vocalist Mariela González Cobos, who has traveled with him from Havana. The others are Raúl Monteagudo (piano), Carlos Daniel Lissabet (bass), Sergio Morán (drums), Pablo Martínez (guitars), Ángel Frómeta (keyboard and programming).

The first number: “Guajira,” from his time with Yerba Buena, back in New York around 2004. That work earned him a Grammy nomination.

Then he plays one of Leoni Torres’ songs and people start feeling the heat and start taking off their coats when a hit and 2011 Latin Grammy Award comes on, when it was made popular by Enrique Iglesias and Juan Luis Guerra: “Cuando me enamoro.”

From then on, the audience, the bunch of Cubans, sings with him, and he comes down to them to be hugged and make them sing songs that shake them, because Descemer Bueno knows how to pierce the feelings of the emigrants, and “Tus luces sobre mí,” “Ser de sol” and, later, “Siete días en La Habana.”

Before, he had sung that other hit of his that set off the version of Gema Corredera and Pavel Urquiza, “Esa lengua tuya.” He also made a duet with Javier Calamaro. The Argentine musician had gone to the dressing room to greet him and they agreed to sing “Lágrimas negras” by Miguel Matamoros. Some 300 people chanting that “en vez de maldecirte con justo encono, en mis sueños te colmo… de bendiciones…”

There is also time for bachata, and reggaeton, song, and son. “Don’t think that because I’m with this small guitar you’re not going to dance,” Descemer says at some point in which he seems timid. But, after a while he becomes ruthless again, and lashes out with all a composer who sings, and sometimes reads (or used to read) can lash out: “Ella” is the song he sings, and improvises, and, the poor bunch of Cubans! But…no, instead of nostalgia, they enjoy it as anywhere on the Island.

He was going to close with “Arenas de soledad” after an hour of singing without losing (neither voice, nor rhythm, nor energy), but he played another one with Ulises Bueno, a notorious Argentine quartet singer who appeared on Saturday night in Córdoba.

At the end, Descemer Bueno said: “Thank you, Buenos Aires, for making me the happiest man in the world tonight,” and he went behind the scenes to go come out shortly after to have his picture taken with everyone who wanted until almost everyone had left. He looked happy, somewhat tired.

“I’ll leave everything in that concert,” he wrote on Facebook before traveling. I believe he did.