They are two men on board a motorized surfboard, and inserted in a metallic structure that extends as a pontoon over the surface of the water. 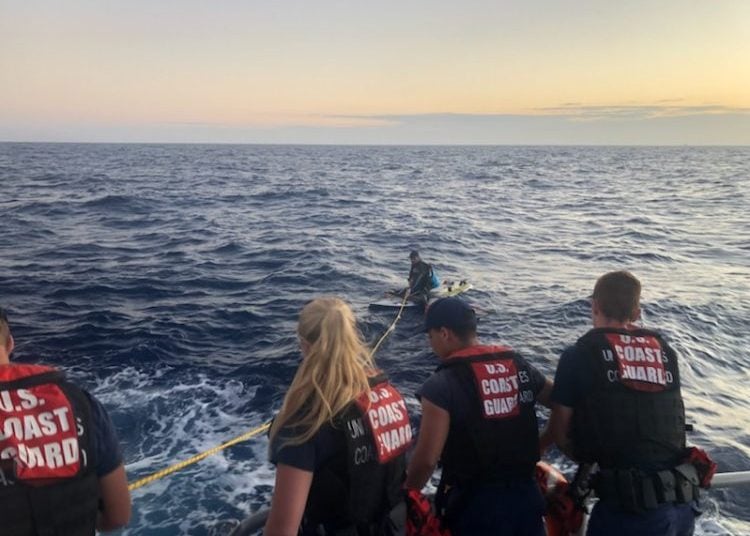 Last Wednesday, the Coast Guard rescued a Cuban diving coach in waters near the Keys who crossed the Straits of Florida on a windsurf board and wearing only a life jacket with a GPS and cell phones. Photo: Coast Guard.

The U.S. Coast Guard announced this Monday that it has suspended the search for two Cubans who, according to their information, left Cuba last Tuesday aboard a motorized surfboard heading for the Florida Keys.

In a message on Twitter, it is only said that the coastguard suspends the operation pending new information.

Last Saturday, the Coast Guard had published a message on the same social network reporting the search for two Cuban men aboard a motorized surfboard and inserted in a metallic structure that extends as a pontoon over the surface of the water.

#Breaking Have you seen a similar vessel? @USCG crews are searching for 2 Cuban males on a surf board w/ a motor & pontoon after being alerted they left #Cuba, Tues. & didn’t arrive in #KeyWest. Call Sector Key West if you have info., 305-292-8727. #SAR @USEmbCuba @CBPSoutheast pic.twitter.com/QrMEbE7WFb

The message included a photograph of the type of board they would have used to leave the island and asked anyone who had seen a similar boat in the Keys area to inform the Coast Guard.

Last Wednesday, the Coast Guard rescued a Cuban diving coach in waters near the Keys who crossed the Straits of Florida on a windsurf board and wearing only a life jacket with a GPS and cell phones.

Elián López, who according to his family ventured into the sea in order to receive medical care in the United States because he suffers from colon cancer, was rescued approximately 15 miles (24 km) south of Islamorada Cay and taken to a hospital.

“He requires urgent medication, being one of the reasons why he desperately risked his life,” Dunia Rodríguez, his cousin, wrote in a petition on Change.org.

Rodríguez confirmed to Telemundo this Sunday that López has already left the hospital and that the immigration authorities will allow him to remain in U.S. territory to receive medical care.

López recounted in an interview with Univisión that he had an eventful journey due to rough seas and that when the sun began to go down, on the second day, he gave up and sent a message to two friends in Miami who were aware of his trip asking them to rescue him, that he was south of Islamorada.

“Until a good friend told me: ‘don’t wear yourself out anymore. Hold on, we’re coming for you,” he added. The Coast Guard rescued him just at dusk on March 23.

In the fiscal year that began on October 1, 2021, more than a thousand Cubans have been intercepted in U.S. waters and, in most cases, have been deported to Cuba.