The Soberana 01, Soberana 02, Abdala and Mambisa vaccines were chosen to receive the Medal for Inventors awarded by that organization. The director general of the World Intellectual Property Organization (WIPO) and the Cuban president participated in the awarding ceremony. 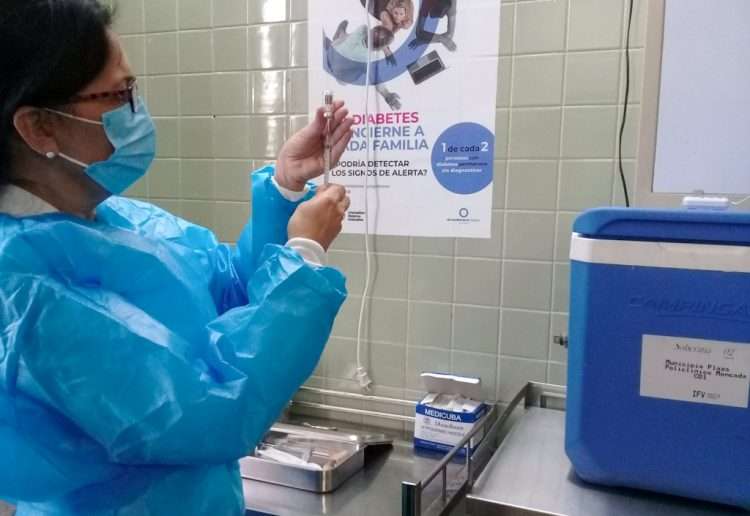 Preparation of a dose of a Cuban vaccine against COVID-19. Photo: @FinlayInstituto / Twitter / File.

The World Intellectual Property Organization (WIPO) decided to award its Medal for Inventors to the authors of four Cuban COVID-19 vaccines, the island’s official media reported.

The official explained to that news agency that the recognition is due to the contributions of these drugs to the national economic and technological development. The award was presented on Monday by Daren Tang (Singapore), Director General of WIPO, a UN agency based in Geneva, Switzerland.

The creators of the Soberana 01 at the  Finlay Vaccine Institute (IFV) and the Molecular Immunology Center (CIM) were awarded, as were the developers of Soberana 02 (IFV), together with the CIM and the University of Havana, according to the ACN. Abdala and Mambisa, from the Center for Genetic Engineering and Biotechnology (CIGB), also received the award.

Cuban President Miguel Díaz-Canel and Daren Tang participated in the meeting, a ceremony in which diplomas of recognition were also awarded to researchers from the Finlay Vaccine Institute, the University of Havana, the Center for Molecular Immunology and the Center for Genetic Engineering and Biotechnology.

Only through science and innovation will it be possible to successfully emerge from the crisis in which the pandemic caused by COVID-19 has plunged the world, Tang told the group of inventors of the Cuban vaccines, quoted by the island’s media.

According to the Agencia Cubana de Noticias (ACN) news agency, hours before, Díaz-Canel and Tang met and talked about “the use of intellectual property as a tool for innovation, transformation and development,” and its importance for “the new economic actors,” referring to the incipient private sector in Cuba.

“We talked about advances in the government management system based on science and innovation. I thanked him for the distinction granted to the creators of the Cuban COVID-19 vaccines,” Díaz-Canel wrote on Twitter.

WIPO indicated on the same social network that the two had a “broad and detailed” conversation about how Cuba “can use innovation and intellectual property” for “the next chapter of its economic and social development.”

The ACN recalls that despite the siege by the United States governments during the last six decades, so far ten products of Cuban science have the Gold Medal of the World Intellectual Property Organization

The World Intellectual Property Organization states on its website that it is a self-financing United Nations agency and has 193 member states. It highlights among its mission the priority of taking the initiative in the development of a balanced, effective international intellectual property system that enables innovation and creativity for the benefit of all.

For its part, the Cuban Office of Industrial Property is in charge of granting the registration of Industrial Property rights and provides specialized scientific-technological services in order to contribute to the development of science, technology, innovation, national and foreign investment, industry and commerce.