The two men left the island at the beginning of last week aboard a motorized surfboard inserted into a metal structure extending over the water surface like a pontoon. 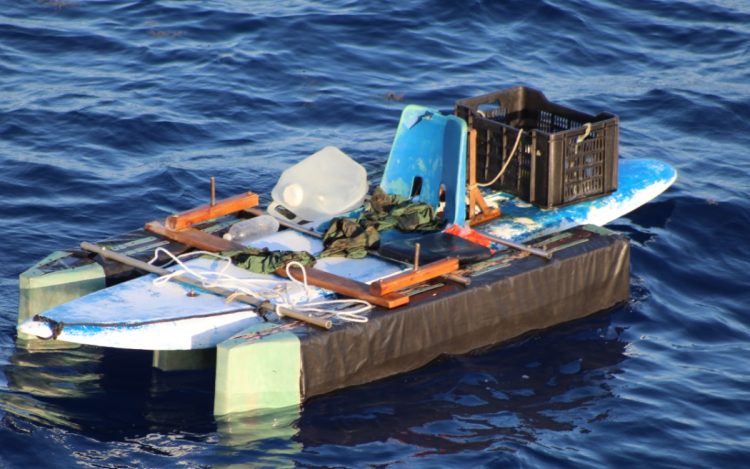 According to the Coast Guard, the two rescued men are in good health and will be transferred to the Royal Bahamas Defense Force. Photo: twitter.com/USCGSoutheast

The U.S. Coast Guard reported this Wednesday the rescue of two Cubans who left the island aboard a small motor boat built from a surfboard, who had already been reported missing.

“A good Samaritan saw the two Cuban men on Tuesday at approximately 5 p.m. about 10 miles west of Bimini, Bahamas, and contacted the Coast Guard,” said a statement posted this Wednesday morning on Twitter.

#Update A good Sam spotted the 2 Cuban males, Tues., at approximately 5 p.m. about 10 miles west of Bimini, #Bahamas, and contacted the @USCG. #USCG crews rescued the 2 people, reported in good health, and are expected to be transferred to @TheRBDF. @USEmbCuba @USEmbassyNassau pic.twitter.com/MDZP5K9YdM

According to the Coast Guard, the two rescued men are in good health and will be transferred to the Royal Bahamas Defense Force.

The Coast Guard did not release any further information about these two people who were known to have left Cuba early last week and were thought to be arriving in the Florida Keys.

The Coast Guard launched a search operation in the Keys area, but last Monday, in a message on Twitter, it announced that it was suspending it pending new information.

In a message published last Saturday, the Coast Guard asked the public to notify them if they saw two men in a boat made from a surfboard.

In the current fiscal year, which began on October 1, 2021, more than a thousand Cubans have been intercepted in U.S. waters and, in most cases, have been deported to Cuba.