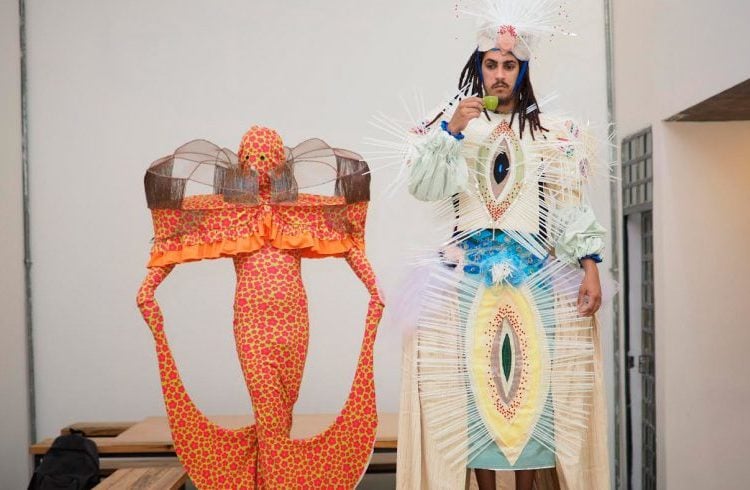 Vestiphobia is not a conspiratorial show. On the contrary, it is a provocation and a constant dialogue with the spectator about the fashion industry and the art of dressing. The Fábrica de Arte (FAC) reserved for it its Section 3 from February 23 to 26.

“Who has had a bad day wearing a pair of Levi’s?” or “That looks sinful on you” are some of the ideas in the narrative line of this bilingual project that communicates with the public through multiple languages: contemporary dance, acting, video installation and live music.

“We hope the layers of all these genres will create a complicated conversation about our relation with clothes, especially in a country like Cuba where fashion is a phenomenon very different from the rest of the world. More than fashion, one would have to talk here of style, which has to do not just with the economic condition but rather with the cultural condition, with certain ways of ‘resolving’ that are very particular to this country. For us it is fabulous to be in a place where fashion responds to the idiosyncrasy, to the historic moment and not to the major tendencies of the international market that end up being superficial,” Berta Jottar, one of the producers of Vestiphobia, explains.

Three artists are behind the project. Willard Morgan, New York writer and actor, who created a monologue he performs in the third act of the show together with Cuban actress Yessica Borroto; to direct that production filmmaker Steve Fagin joined the project.

“He is very eccentric, therefore he has placed the actors in a total contrast, has faced them on the stage in a bicultural duel. Steve is Jewish like Morgan, from the same generation and both come from a left-wing tendency within art, so it’s very interesting that they are working together,” Berta says.

Finally, designer Uta Bekaia joined the Fagin-Morgan duo. He has directed the making of Vestiphobia’s clothes in the Galeria Taller Gorría workshop in Old Havana. After several days of working in Cuba, designing extravagant clothes and continuous creation, the performance is the place where the combination of all the project’s elements culminates and where the pieces created by Cuban and U.S. designers, adapting the concept of Vestiphobia to Cuba, are exhibited.

The Havana show is also produced by Grettel Carbó, with a group of more than 30 Cuban artists, among them René de la Crus, Francis del Río and Katia Aislen.

Through his combination of experimental fashion, video art, music, dance and autobiographical narrative, Vestiphobia’s goal is to entertain and enrich our understanding of clothes throughout time; as a necessity, luxury, weapon, shield and, under the form of industrial marketing, opium for the masses.

Speaking of this shared work experience between artists from both countries and the creation of the final show, OnCuba talked with the project’s artistic director, Uta Bekaia, a designer born in Georgia, who after this first visit to the island speaks of the similarities he found with his country of origin: “For me it has been like being over there but in a tropical environment.”

What is the concept behind Vestiphobia?

The project is about our relationship with clothes and how that affects us. It means “fear of clothing.” The performance has been being worked for five years. It all started by thinking of a dandy, which is a person very refined when dressing, with a great deal of knowledge about fashion.

In addition it draws inspiration from poet Oscar Wilde and medieval painter Hieronymus Bosch, and afterwards all that gave form to the current project. It is a multimedia project because it’s not just about fashion but everything that has to do with it. It is poetry, sound, movement, video…it has many layers and one of them was also the dressmaking workshop which we carried out here during these days.

How are all these elements coordinated within the show?

It is in the show where the elements take on meaning and come together as a multimedia project where there are different points of view that converge in a common point.

When we thought of the show for Cuba what caught my attention was that a factory for the mass production of clothes did not exist here. I liked the idea of creating a piece of art in this context; and that’s what happened in the workshop, where we created cultural clothes. I really like the fact that here clothes are more a form of expression than a business.

How much is the concept of Vestiphobia adapted to Uta Bekaia’s line of work? What does this project personally represent for you?

The fashion industry has always been a mechanism to make money and create a market, but I am not a dress designer, I’m an artist and each piece I make is a work of art, it is different, unique. Then that form of making clothes also represents a way of creating contemporary art.

Vestiphobia has to do with archaic forms of making clothes but in a new and at the same time old way.

How did the experience of joining Cuban and U.S. artists in the clothing design workshop work?

It has been a collaboration between all the forces where the energy has been very positive. It was very interesting to see them working because without having much information they took the materials and created pure art.

We used all the materials we found, in fact, all the fabrics are recycled. One of the ideas of the project was precisely to give a new use to things that were previously used, like giving them eternal life.

What does the show presented in the FAC until this Sunday display?

We’ll see how everything comes together. It is the most theatrical part of the project. All the clothes made in the workshop will be exhibited there.

Visually speaking it is very spectacular: dancers from contemporary dance, visual artists, actors…. It will be something eccentric. A four-act performance that depending on the relation with the public will last from one and a half to two hours.

Will Vestiphobia go to other countries after Cuba?

What we have done here is an experiment, it’s the first time that the project leaves the United States, so we will see how the people receive it here, what type of effect it will have, and based on that we’ll know how to continue.

Vestiphobia proposes women and men immersed in the culture of fashion, thinking their role as part of one of the most booming creative industries of the moment; seeking a subject beyond the dress, in their identity and plurality, without both being dichotomous, and promoting the freedom of their bodies when showing all their identities and unmasking prejudices or daily repressions. A creative audacity is needed that jumps over the reproduction of standardized models and generates the search for novel identity patterns emerging from the free talent that works outside the “big” brands and disconnected from the tendency of global success sought after by stars, corporations and zombies, at the expense of their own comfort and happiness.

TN: Quotes by artists were translated from the Spanish version.