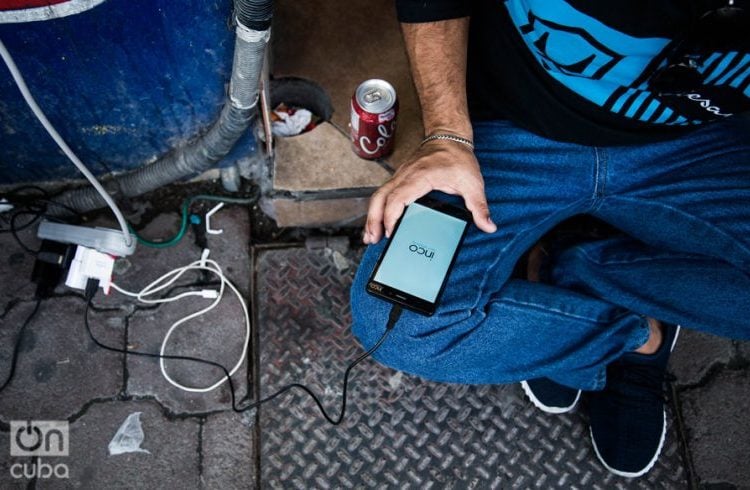 They sold everything, from their camera to their house. There isn’t even enough money left to buy a cell phone that takes good pictures. When they tried to see each other through a video call they ran into the technological limits of their phones. Ileana and Roberto are separated, they look like images.

It’s a fresh and sunny day in the capital of Florida, where many of those who already arrived live.

She has the day off and she still hasn’t seen the sun. He calls her from the border for the fifth time that day. It’s to tell her that some Cubans were almost kidnapped when they went on their own to a hotel but that he’s OK. He also tells her that he’s very afraid because he’s also in a hotel, alone: he left the shelter because sleeping on the gym’s floor did not help him get rid of a bronchitis from which he had been suffering for a few weeks.

They hang up. She looks at the floor, presses her lips together, uses them as a dike to keep out her bitterness: “He is so intelligent, so skillful, he knows how to do so many things, he doesn’t speak English well, but he’s a psychologist and an accountant.”

Ileana is a doctor specializing in Clinical Laboratory from the Camilo Cienfuegos University of Matanzas. She’s working as a nurse in a home for the elderly close to Downtown Miami. In addition to the elderly, the home is also for persons with motor or mental problems.

The place has three floors and around 30 persons live on each one of them. There are three employees per shift. Ileana has a nine-hour shift per day on one of the floors. She has to bathe, vaccinate, feed and medicate the residents. It’s what she was able to get.

“I applied for everything. I did the exam for a medical assistant,” she says. She was called once from a clinic, they gave her an English test and she passed it but she failed in computation. “They asked me what F1, F3, Alt Ctrl Supr was for and other tricky questions.”

In Cuba she worked as head of a lab. She taught students how to draw blood and investigate. She was somebody; she earned the equivalent of 30 dollars a month. In Miami, as a nurse she earns some 600 dollars. Renting a small apartment in Florida costs at least 1000: Ileana arrived in June 2016 and her strategy consisted in looking for the way to save on rent. This is the first wage she has saved for herself, all the previous ones she sent to her husband to pay for the rent and his trip through Mexico.

While working in Matanzas Ileana had to go through the zika epidemic, as a doctor and as a patient. The couple’s home was a room in a tenement house from the mid-19th century with a waste ditch that never stopped overflowing. It’s what they were able to buy after working their butts off for some years.

Since the early 2000s a merchant from Matanzas, taking advantage of the Spanish passport Ileana was able to get through her grandfather, used to send her to Bolivia and Mexico to buy clothes. She used to pay her 200 dollars per trip.

Ileana could immigrate to Spain but she doesn’t know anyone there nor has the money for the plane ticket. In Miami, on the other hand, has a cousin, whom she didn’t notify when she traveled. It was Roberto who called Miami to notify that his wife was already at the airport. The cousin’s husband went to pick her up and said to her: “You’re coming home under my responsibility because here no one wants to receive anyone.”

“I stayed two weeks during which my cousin always had a sour face, as soon as I could I left for Chicago to another cousin’s home but I returned because I got a job as a caregiver,” she says.

The lady she took care of gave her 50 dollars a day, for 24 hours of work. She gave her board and food but she had to be close to her all the time, the job demanded that she be at the elderly lady’s side absolutely all the time.

Now she lives with Irma, whose house in Vedado was expropriated in the early 1960s. Irma’s children visit her once a month. Ileana agreed to keep her company in exchange for living there free of charge, in her home of several environments, with a garden, a car parked at the door and other aspects of the “American dream,” in the heart of Little Havana.

Ileana has two children from another marriage. Roberto has a daughter. They live in Matanzas and they “still” don’t want to leave Cuba: “They no longer believe…, but Cuba is a beautiful country when you are a child.” Her children as well as his daughter are under 20 years of age.

“If things continue as they are, my children and the children of my children are going to live worse than how I lived.”

Roberto and Ileana were advocates of a Revolution they defended, at a time in which people like Irma seemed like monsters to them. But the waste ditch of the home in Matanzas did not stop overflowing, the wage never increased and Roberto started having problems in the University.

Ileana’s promotion in different medical disciplines consisted of 300 persons. Through Facebook she made contact with several of them: at least half of them live outside Cuba. Out of the 35 senior high classmates, 30 left.

“My parents were wrong but in an innocent way, Fidel promoted changes that we needed, but that was it…. Well, almost all, because my generation and those that followed are no longer there.”

He calls her from the border for the sixth time in one day. He tells her that he has just been offered a job. He will be a teacher and psychopedagogue in a school in Nuevo Laredo. He will move to a hotel and will live with the fear that the Zetas will kidnap him as they do with the immigrants who have families in the United States for more than a decade.

When Ileana left Matanzas six months ago the plan was to wait a year so she could get her residence and “bring him over.” He would wait in Cuba. In the middle of this, in early January Roberto got tired of waiting and bought a tour of Italy to get the visa and instead of traveling to the Old Continent he went to Mexico to get to the border and cross with dry feet. But that same week Obama repealed the policy that allowed him to get there and be received.

The Cubans’ routine is to stand at the border to wait, but Roberto cannot wait standing up. He has a prosthesis in his right leg, he had a tumor on his knee when he was 20: “He had to pay for it because they asked him for a bribe to get it, it was free but they delayed the procedure or else pay them something.” Roberto almost has no money left. He sold the dwelling in Matanzas for some 2,500 dollars to finance the tour and that amount as almost disappeared. What he now has is to finance the wait.

Working her butt off Ileana was in DF, a city that gave her the impression “of being the best country” because “there’s a wide variety of food, clothes, options to buy more expensive, cheaper, not like Miami that everything is expensive nor like in Havana where there is nothing.” Therefore, Roberto’s new job is an opportunity that for the time being they are going to partially take advantage of. The couple’s plan continues being to live in the United States. Ileana is evaluating the possibility of moving to Texas and that way see each other at least on weekends until she’s been in the United States for a year and she can ask for family reunification.

Ileana misses Cuba. She knows she can save money and buy something better than what she had. But she is afraid, despite the fact that the Cuban Ministry of Public Health has insisted on its willingness to receive and relocate the doctors and technicians who have abandoned missions abroad, although this is not the case of Ileana. “My family here didn’t help me too much and the people who live in Miami are very friendly but they tell you: ‘you have come to the law of the jungle, or you adapt or you leave.”

She works too many hours a day to be able to socialize or make contact with the Little Havana community, in addition she is bothered by the way in which those who arrived criticize those who are on the way or those who stayed. She gets really mad when someone speaks badly about the Cubans who return to Cuba on visits once they establish themselves in the United States: “You return because you have family there and because we are and will be from there, I come here to work not to get U.S. nationality.”

Roberto is a psychologist but each time he dials Ileana’s number it’s to be a patient. He tells her that he’s got a cold, and she advices him, he tells her he’s afraid and she tells him to no get far away from the rest of the Cubans, he tells her that he misses her and she says she also misses him. He tells her that they’re going to live well in the United States. There are silences in the conversation. Roberto is 51 and Ileana is 49, the life they thought of is on a limbo. The anguish is usually calmed with the phrases that get to him from his couple’s northern side. The other day Roberto couldn’t sleep until Ileana said to him: “Calm down: if you don’t cross, I’ll cross.” The most difficult part is getting to sleep.

Note: The names in this story have been changed at the request of the
protagonists.