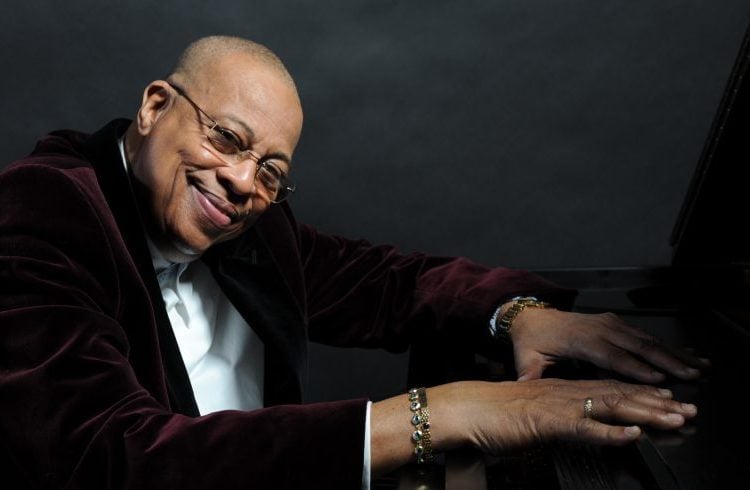 Cuban through and through, Chucho Valdés also knew how to pay homage to one of our most sacred institutions: unpunctuality. It had been a while since the time previewed to begin his press conference,1 and the only “chucho” (swearing) being lavished in the Salón de los Embajadores of the Habana Libre Hotel was that of us journalists, impatient and with no coffee….

At last he appeared, gigantic and smiling, donning his perennial Bolshevik cap, a psychedelic shirt, and that placid face that only those who are above good and evil can have. He gave us, affable, a “thank you for being here,” which should have been “thank you for waiting,” or “thank you for not leaving.” As if he needed to apologize…. If it had been someone else perhaps no, but we forgave Chucho.

And we did it not just because we recognized the great man who propped Cuba up in the map of the world of contemporary jazz, but because we sensed that each second we had waited would be worthwhile, that we were about to get a master lecture about music, but also about life. By his side, two aces of the genre, Christian McBride and Terence Blanchard, looked at Chucho as any great musician would look at them, that is to say, with veneration, deeply moved and happy.

He had a ball there and so did we, asking him whatever came to our minds and he answering concisely and wisely, like an oracle. He confessed, for example, that he thought it not very probable that Irakere would reunite. “If it depended on me, I would summon them tomorrow and we would give a concert,” confessed the maestro, for whom all the stages of the group were fantastic, as well as its musicians.

To set the record straight: I was born in 79 and I grew up listening to brilliant things like “Rucu Rucu a Santa Clara,” “Oh, La Habana” or “Bacalao con pan”.… By the way, the popular and the “antic” of those years was that music done by virtuosos…. I couldn’t avoid asking myself if one day we would speak of regueton musicians as classics. That’s why I asked Chucho: “is jazz a genre for the elites?”

The Maestro looked at me with a gesture of surprise: “Of elites? Never! In the 1980s the Houses of Culture had full houses with the Jazz Plaza, the same today…. Jazz, which is the music of the world, and we cannot compare it to pop, which is a less analytical and more commercial genre. They are two different things,” Chucho declared sententiously, giving me a conspiratorial wink.

McBride rounded out the idea: “Jazz is folklore. What I precisely loved about jazz was that it came from the people, and yes, it demands intellect, but above all heart, feeling and soul. Perhaps those who theorize about jazz are the elites, but jazz belongs to the people.” Blanchard, a professor of the Thelonious Monk Academy, in turn recalled that jazz and its variants like the blues or soul were born from pain, “from such a deep sorrow that words could not express it, and music was needed to express it.”

For them, jazz is something that was as intense and unpredictable as life itself. It did not come to please, but rather to challenge, to let out steam through music, to be honest and say the truth. And that truth, like a temple, took me to a not so faraway past when I heard Un poco de jazz, the story about a woman possessed by jazz, who vibrated when the double bass played, the cadence of sex…I say, of sex…or the lashing of percussion. Making of her body a musical instrument played by virtuosos was the unexpected fantasy of that lady, married, bored, who knew nothing about jazz, but who confessed that “a bit of it once in a while does no harm.”

Because jazz, like sex, like life, is to be free against all odds, of living fully and consciously. Of screaming or becoming absorbed. Of living with swing. Of being implicated. Of fleeing from the boring comfort and daring to add color to life by improvising along the way, instead of spending our time repeating cold, distant patterns…. It can and must be, in short, a senseless raving. Well…like this article. (Damn jazz!)