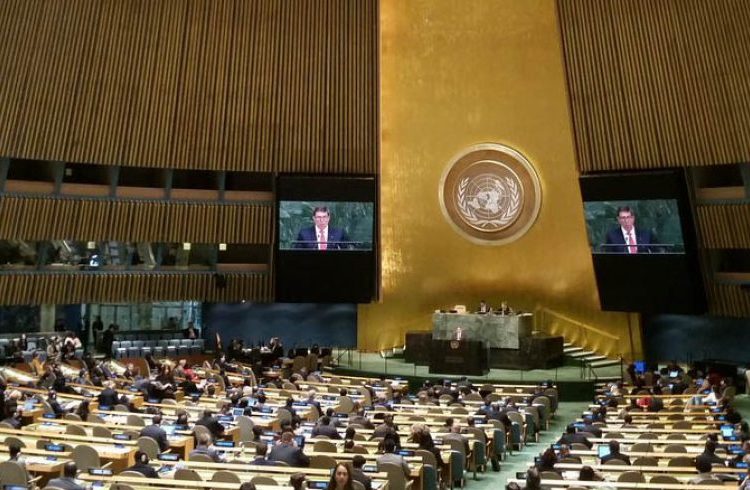 Like every year Cuba has taken to the UN its Resolution against the Blockade. This is the 26th time in a row it has presented it. The result was 191 votes in favor, 2 against (United States and Israel) and 0 abstentions.

U.S. Ambassador to the UN Nikki Haley gave a speech which the Cuban Foreign Ministry described as “aggressive and slanderous.”

After giving his condolences “to the people and government of the United States” because of the terrorist attack that occurred yesterday in Manhattan, Cuban Foreign Minister Bruno Rodríguez strongly condemned Haley’s speech since he considered it a “disrespectful, offensive, interventionist” address “against Cuba and the Cuban government.”

He recalled that “flagrant violations of human rights” are committed in the United States, which is why “it hasn’t the slightest moral authority to criticize Cuba, a small and solidary country, a noble, hardworking and friendly people.”

Rodríguez denounced that the U.S. ambassador was “lying,” using the same style that prevails today in U.S. policy, particularly toward Cuba.

New victory of #Cuba🇨🇺 in the @UN against #USA🇺🇸 blockade https://t.co/eHAgf14qF4│The world said, once again, loud and clear: #UnblockCuba pic.twitter.com/B79BbePOck

Last June 16 President Donald Trump gave a speech that marked a considerable rollback in bilateral relations. Indeed, months later his administration has taken measures to the detriment of diplomatic and commercial relations between the two countries.

The foreign minister recalled the “surprising and encouraging” announcements of December 17, 2014, when Barack Obama “described the blockade as failed, obsolete, inefficient…causing damages to the Cuban people and isolation for the government of the United States.”

“Useless, failed, unviable, a burden for citizens…,” Minister Rodríguez Parrilla continued listing, regretting that, however, it did not recognize it then or now “as a flagrant, massive and systematic violation of human rights.”

“Ambassador Haley’s comments highlight the Trump administration’s misguided approach toward Cuba. If the administration spoke to real Cubans, they would know that fears for the future are rooted in what a rollback of engagement means for their businesses, communities and families,” said the president of Engage Cuba, James Williams.

“The Trump administration seems determined to stand alone in the world, supporting an archaic policy has failed for the last 55 years. And the biggest losers are the people of Cuba,” he added.

Cuba’s will to continue negotiating

“Cuba has the will to continue negotiating bilateral affairs with the United States and to continue the respectful dialogue and collaboration on matters of common interest,” the Cuban foreign minister insisted, adding that the two countries “can cooperate and coexist, respecting their differences” and without “Cuba having to make concessions or negotiate its principles.”

The draft resolution “Need to put an End to the Economic, Commercial and Financial Blockade on Cuba imposed by the United States of America” gains special relevance in a context of a rollback in the normalization, said the minister, who minutes later would leave the podium in the midst of shouts of “Cuba yes, blockade no.”

The lifting of the embargo heads the list of demands put on the table by the Cuban side. It is considered as “the biggest obstacle” for the island’s “economic development” and the “principal problem for economic and commercial relations with the U.S. and the rest of the world.”

This year, up to April 2017, Cuba has had losses worth 4.305 billion dollars: around double what the country needs in foreign direct investment per year. Until now it is estimated that Cuba has lost 822.28 billion dollars as a consequence of the restrictions unilaterally imposed by the United States.

Last year the United States abstained for the first time in the UN voting against the embargo / blockade on Cuba. Then U.S. ambassador to the UN Samantha Power said they had always voted against and that time the United States was abstaining, in the midst of a climate favorable to the change in relations between Washington and Havana.

Ben Rhodes, former advisor to President Obama and a key person in the negotiations between the U.S. and Cuban governments, last year Twitted that there is no reason to vote in defense of a failed policy which they opposed.

There is a visible change, in the speech as in the practical effects of the presidential policy, of one administration and the other.

Yesterday 10 Democratic senators proposed in a letter to President Donald Trump that he again abstain. According to them, the embargo “has isolated” the United States from the international community, “particularly from allies and partners in this hemisphere.”

In their opinion, that policy has been repeatedly and publicly condemned by the international community for being ineffective and damaging for the people of Cuba. The longer we maintain this obsolete Cold War policy, the more our international and regional credibility will suffer, they said.

However, Heather Nauert, Department of State spokeswoman, had announced her country’s vote against the resolution, to put special emphasis on President Donald Trump’s new policy toward Cuba, which seeks to promote human rights and democracy, she said.