The Cuban government is trying to add the participation of the population in the capital to fight the world’s largest invading mollusk. 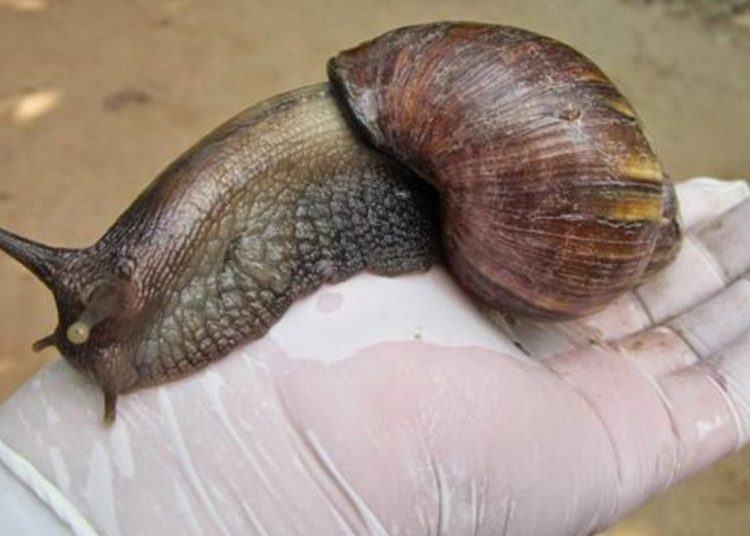 In an attempt to control the Giant African Snail plague, the Cuban government convened a day of volunteer work from September 23 to 28 in Havana’s 105 People’s Councils.

Endowed with a voracious appetite, this snail is able to devour any vegetable in its path. Although it is not poisonous, it is considered a pest due to its potential power of destroying crops, which can produce an imbalance in the ecosystem.

But this is not its biggest problem, but rather its ability to transmit diseases to people. They carry parasites that when in contact with human beings could trigger eosinophilic meningitis and abdominal angiostrongiliosis.

Elizabeth Peña Turruellas, head of the National Urban, Suburban and Family Agriculture Program, told the Cuban press that the objective of the activity was to exterminate it through its concentration, using traps with fruits and foodstuffs, mechanical destruction, incineration, the application of products such as lime and others recommended by the Department of Plant Health.

She also explained that to achieve this it was necessary to achieve the widest possible participation of the people. This action seeks to generalize the practical experiences achieved in the different territories to stop the spread of the Giant African Snail to other areas.

The spread it has reached in areas of the province of Havana requires the joint participation of all the forces that in one way or another are linked to this phenomenon, she explained.

The Giant African Snail (Lissachatina fulica) is native to East Africa, from where it has spread to a large part of the countries of the tropical and subtropical strip of the planet. It is currently present on all continents.

It develops an amazing reproductive capacity. This animal is exceptional among all snails because in addition to being hermaphrodite, like the rest of its congeners―which have male and female reproductive organs―, this species is capable of self-fertilizing itself.

If to the above is added that it breeds about five or six times a year with an average laying of about 200 eggs, and that approximately 90 percent hatch and manage to reach adulthood, the destructive and invasive capacity of this species is hair-raising.

The mollusk has been in Cuba since 2014 and has been detected in at least eight provinces.