The minister of tourism and the president of Meliá Hotels International spoke at the event. 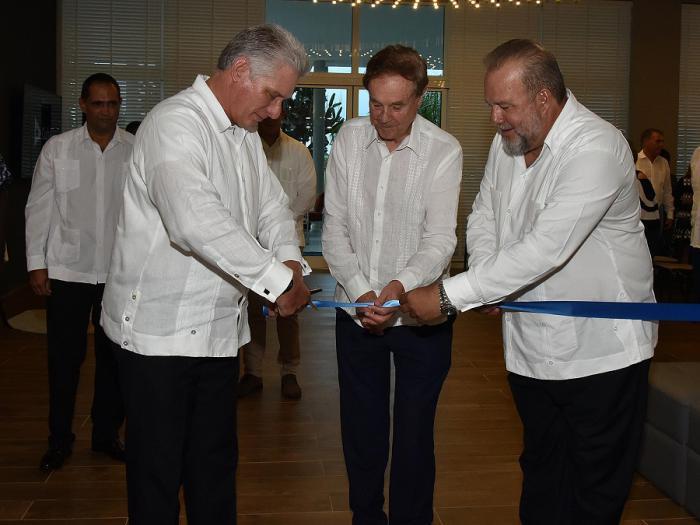 Before executives, representatives of hotel chains, members of the diplomatic corps, investors, builders and tourism workers, Minister of Tourism Manuel Marrero Cruz gave the keynote address. The opening of the hotel, he said, coincides with a delicate energy situation that has been addressed by the Cuban president and other leaders.

“This inaugural ceremony,” he said, “is an irrefutable demonstration that we are not overcome by uncertainty or improvisation; that the country will remain alive, functioning and developing.” And further on: “The Varadero Internacional is inheriting the history and culture of its predecessor; its new location protects the beach dune, guarantees its sustainability, the protection of the environment, and makes it ecofriendly. It has been equipped with the highest technology and with all the facilities that guarantee a wide variety of services that endorse it as an exceptional high-standard hotel.”

For his part, Gabriel Escarrer Juliá, president of Meliá Hotels International, said that Cuba had become one of the most important destinations in the Caribbean. “Varadero surprises again,” he said. “Never, not a single day, have we regretted a firm commitment to this country.”

The All-Inclusive installation opened the first rooms last February 13. New services and levels were incorporated later on until it was fully concluded.

The Meliá Varadero Internacional, sustainable for the use of energy, water and new technologies, has more than a dozen restaurants and several swimming pools, one of them on the 12th floor.