They were rescued in a joint operation between the U.S. Coast Guard and the Carnival Fantasy cruise ship. 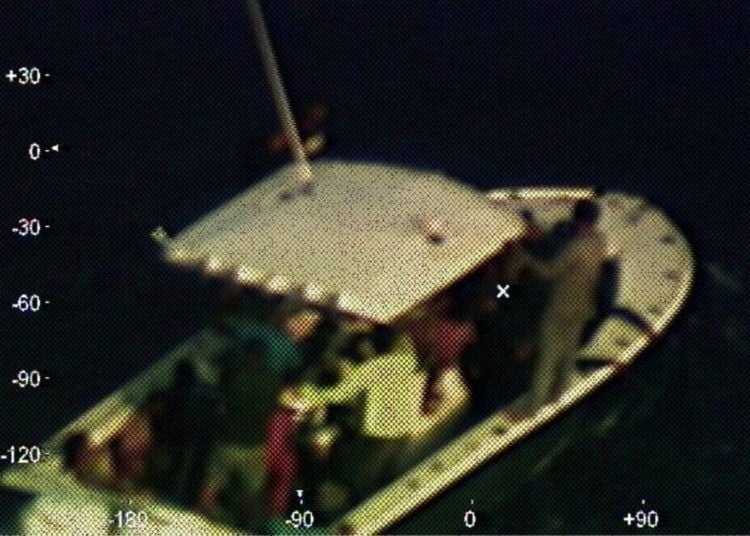 This photograph provided by the U.S. Coast Guard, captured by an airplane of that agency, shows a broken down boat located 210 kilometers (130 nautical miles) from the Yucatan Peninsula in Mexico, on Sunday, April 14, 2019. Photo: Third Class Petty Officer Brandon Giles/ U.S. Coast Guard via AP.

The U.S. Coast Guard coordinated a joint operation with a cruise ship to rescue some 20 Cuban migrants who had been drifting in the Gulf of Mexico for several days.

According to the U.S. entity, a group of 22 people began a “trip from Cuba to Mexico in a wooden boat,” but the boat broke down and they were left adrift for three days.

After 72 hours, they were rescued by “a Cuban-Mexican” who was sailing on board his “sport fishing boat.” However, shortly after the engines of that second vessel stopped working “and the 23 people were adrift for another three days.”

The Coast Guard service indicated that it was contacted on Sunday morning by the brother of one of the Cubans. In addition to initiating its search for the fishing boat, the Coast Guard alerted the Carnival Fantasy cruise ship, which was sailing through the area on its return voyage to the port of Mobile, Alabama.

The cruise ship turned around to answer the distress call, according to the local channel WKRG.

After a first unsuccessful search in two different areas, a plane from the Seventh Coast Guard District spotted the boat stranded some 210 kilometers from the Yucatan Peninsula and warned both the Coast Guard base and the cruise ship.

Two hours later, the Carnival Fantasy arrived and rescued the 22 Cubans and the Cuban-Mexican, and once on board the medical staff of the cruise ship attended two people who presented injuries which were not serious.

According to the Coast Guard, the 23 occupants will be placed at the disposal of the Customs and Border Protection (CBP) office on Tuesday, in Mobile.

This rescue occurred the same week that the Coast Guard intercepted a boat with eleven Cubans and an alleged human trafficker about 41 miles (66 kilometers) south of Key West, in the southern tip of Florida, as the institution reported this Sunday.

The Coast Guard spotted the 30-foot boat (9 meters) last Thursday after being alerted by Cuban authorities of a group that sought to reach U.S. shores.

Agents of the Seventh Coast Guard District intercepted the boat, which was carrying four men and five women, as well as a minor, all of Cuban nationality and who did not have health problems, the agency reported.

The immigrants were transferred to another Coast Guard vessel in order to repatriate them to Cuba in the next few days, while the alleged trafficker and a man who was part of the Cuban group were taken into custody.

Although after the elimination of the “wet foot / dry foot” policy a decrease was reported in the interception of Cuban rafters, since the last quarter of 2018 an increase has been registered, although without reaching the figures of previous periods.

In early April, a group of 10 Cuban migrants sailing in a small boat was intercepted this week by the U.S. Coast Guard at about 20 miles (32 kilometers) from Matecumbe Key, in the Florida Keys, and another six arrived at an island in the Honduran Caribbean, suffering from dehydration and lack of food.