Except for Isla de la Juventud, all the provinces are affected by the detection of imported cases. 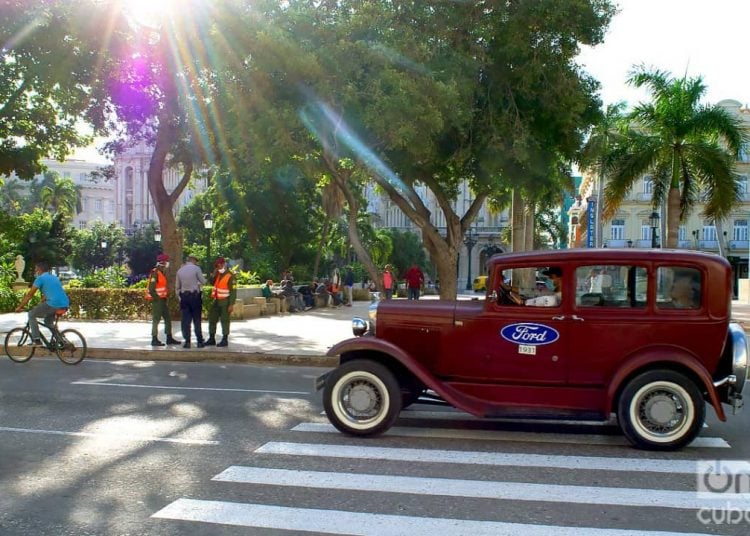 A classic car passes in front of a group of police officers in Havana’s Parque Central, on December 1, 2020. Photo: Otmaro Rodríguez.

With 142 recovered patients, the statistics seem encouraging; however, the new infections this Thursday rose to 122, a high number, the second highest after 124 were detected positive for the SARS-CoV-2 virus last December 6.

More than half correspond to imported cases (66 imported-56 autochthonous), the predominant scenario since last December 11, according to Dr. Francisco Durán in his appearance on Fridays from the Cuban television studios.

“The number of imported cases has been higher than the autochthonous ones since December 11. It is a problem that has to do with the behavior of the disease in the world,” said Durán.

In this regard, he stressed that the main origins of the travelers have been the United States, Mexico, Panama and Haiti. Durán also referred to the fact that 68% of the cases found out about their health after the test carried out at the airport.

Except for Isla de la Juventud, all provinces are affected by the detection of imported cases this time, a record in which the provinces of Havana (27 cases), Ciego de Ávila (four) and Camagüey (four) stand out.

Regarding autochthonous cases, Havana also tops the list (16 cases), followed by Matanzas (14) and Artemisa (eight). The rest of the territories can be consulted in the report issued today by the Ministry of Public Health (MINSAP).

10,869 samples were processed on the day for a diagnosis in which 120 Cubans and two foreigners, travelers from the Netherlands and the Dominican Republic, are involved. The 142 discharges reported yesterday led to the number of recovered this week to rise to 534, 92 more than the previous week, according to Durán.

There were no deaths on the day and the death toll still stands at 137 on the island since March, a period in which 9,893 people have been infected and, of that amount, 90.3% have already recovered.

At midnight yesterday, 12 patients were in intensive care, eight in serious condition and four in critical condition.

The national director of Epidemiology of the MINSAP stressed that December is being the second month with the most infections, although from what is looming, the figure will vary and this will end up being the period in which the greatest number of COVID-19 patients have been detected in Cuba since the pandemic began.