This was confirmed this Friday by Dr. Emilio Delgado, provincial director of health, during the meeting of the Temporary Working Group to confront COVID-19 in the Cuban capital. 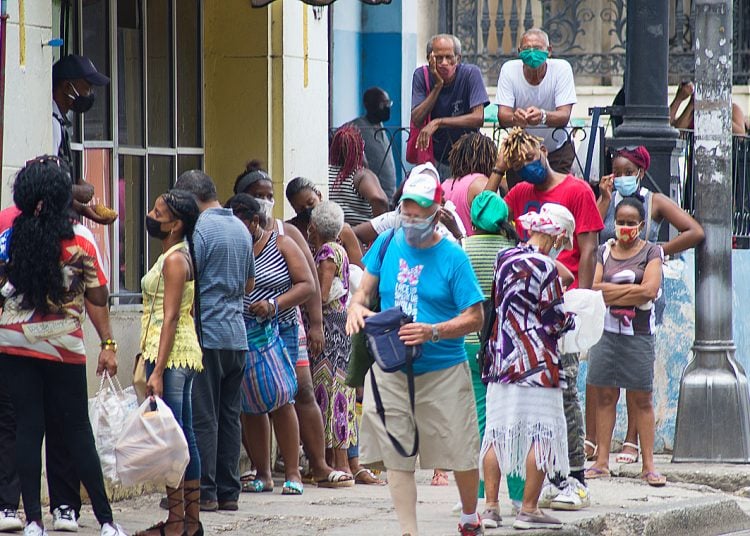 People in a queue to buy food in Havana Photo: Otmaro Rodríguez.

The Delta variant of the coronavirus, considered the most contagious identified so far and which in the opinion of the World Health Organization is on its way to being the dominant strain in the world, is already present in Havana, according to local authorities.

This variant of SARS-CoV-2, detected for the first time in India, “is making way” in the Cuban capital, as was recognized this Friday  by Dr. Emilio Delgado, provincial director of health, cited by Tribuna de La Habana.

During the meeting of the Temporary Working Group to confront COVID-19, Delgado explained that Delta is 64 times more infectious than Alpha — as the strain detected for the first time in the United Kingdom is known and that has been circulating for several months. in Cuba — and “increases twofold the possibility that those who contract the virus will be hospitalized.”

For this reason, the specialist called to “increase epidemiological surveillance, take good care of active outbreak controls and efficiently carry out health interventions,” at a time when the island is experiencing its worst situation of the entire pandemic.

For his part, Luis Antonio Torres Iríbar, first secretary of the Communist Party in the capital, and Reinaldo García Zapata, the governor of Havana, “demanded that the measures be redoubled and that all the suspects be hospitalized for PCR tests,” according to the local newspaper.

The Tribuna report does not include figures or provide more details on the detection and spread of the Delta variant in Havana, nor does it specify whether it has been detected in other territories of the island.

Until now, the health authorities had reported the presence in the country of other strains considered “of concern” by the WHO, such as Alpha and Beta, detected for the first time in South Africa and which according to the latest official records were the predominant strains in the capital and other Cuban provinces.

Now the Delta variant could change that equation and displace the other circulating strains, as has happened in other nations of the world. This variant is already present in at least 85 countries and is responsible for the increase in infections in nations where the epidemiological situation had begun to improve and even with ongoing vaccination campaigns.

Countries in Europe, such as the United Kingdom and Russia, in the Americas and Asia have registered a rapid increase of Delta, whose most common symptoms reported by patients are more similar to those of a common cold, such as headache, sore throat and runny nose, and not classic symptoms of the parent virus, such as cough or loss of smell.

However, international experts have warned about its high contagiousness and its high risk of infection and hospitalization. Although it has not yet been specified if it is more lethal than other strains, the WHO has warned that the increase in cases that it causes “leads to more hospitalizations and greater pressure on health workers, which increases the risk of death.”

In recent days Cuba has registered a notable increase in daily cases, which reached its negative peak this Thursday with 2,464 infections, while active cases exceeded the 10,000 barrier (10,357) for the first time. This situation is due, in the opinion of experts, to the spread of the most contagious strains of the coronavirus and the failure to comply with the measures established to stop their spread.

In Havana, where there had been a downward in the most recent days — from more than 600 and 700 daily cases to less than 350 — perhaps due to the increase in people who have begun to be immunized against COVID-19, a new spike has started being seen that brought the number of infections to 391 at the close of this Thursday.

This situation has reactivated the alarms of authorities and experts, in the face of the danger of a setback in what has been advanced and of not being able to fulfill the most favorable scenario forecast for the coming weeks.