The number of recovered reached four, while of the 73 that remain hospitalized, one is in critical condition and two are reported serious. 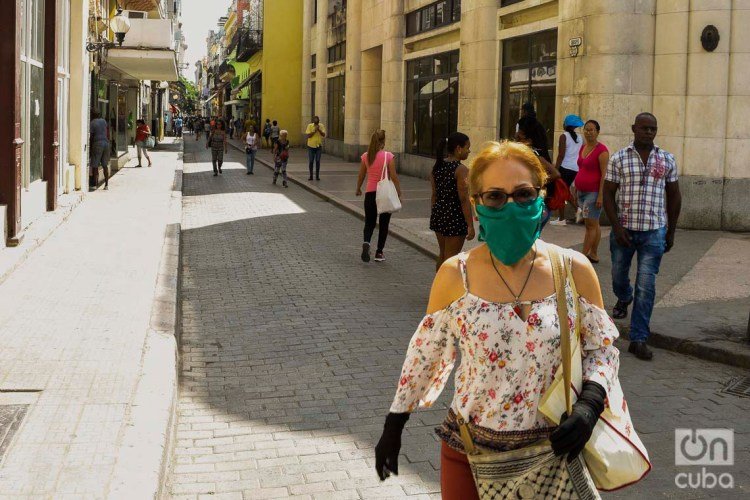 A woman uses a facemask in Havana as a security measure against COVID-19. Photo: Otmaro Rodríguez.

The Cuban Ministry of Public Health (MINSAP) confirmed 13 new cases of COVID-19 on the island at the close of this Thursday, bringing the number of infected to 80.

Of this number, 73 remain hospitalized, while three people were discharged, so there are already 4 recovered patients. In addition, two deaths are reported―the second of them in the early hours of Thursday―and one evacuated to the United States.

Among those hospitalized, 70 have a stable clinical evolution, according to MINSAP, while one is in critical condition―a 63-year-old Cuban who suffers from high blood pressure, diabetes and ischemic heart disease―and two reported severe: a 38-year-old Cuban and a 72-year-old Frenchman, with various pre-existing conditions.

Among the new cases are five Cuban children and adolescents, aged between 7 and 17, who have come from abroad or had contact with a previously confirmed case. Also two young men of 21 and 24 years old, another two of 33, one of 48, another of 53 and an elderly woman of 92.

In total, of the 12 Cubans confirmed with the disease this Thursday, six are men and the same number are women. Seven arrived from abroad and five had contact with other confirmed cases, so they were already isolated.

By province, the cases are distributed between different municipalities in the provinces of Villa Clara (5), Havana (2), Matanzas (2), Pinar del Río (2) and Camagüey (1).

The only foreigner is a 56-year-old Frenchman, who was detected with respiratory symptoms at the border check-up on his departure from the country, after which he was hospitalized in the Pedro Kourí Institute of Tropical Medicine (IPK), in Havana. What calls attention about this case is that from his entry (March 7) until the infection was detected (March 24), more than two weeks elapsed, considered the incubation period of COVID-19, so his contagion must have occurred on the island.

This Friday, in a press conference, Dr. Francisco Durán, director of Epidemiology of MINSAP, reiterated the call to increase the perception of risk among Cubans and said that, although there were no cases that demonstrate local transmission in Cuba, the risk is increasing, because this is confirmed by the increase in the number of patients and the possibility that there are asymptomatic carriers or people who have not yet developed symptoms due to being in an initial phase of COVID-19.

Finally, the note from MINSAP adds that a total of 1,851 patients are hospitalized for clinical-epidemiological surveillance in isolation centers; of them 136 foreigners and 1,715 Cubans. Meanwhile, 34,216 people are monitored at home through the primary health care system.

Until the closing of this Thursday, 173 countries were reported with cases of COVID-19, 125 of them with local transmission, according to the World Health Organization (WHO). The number of confirmed cases was 467,710 and the number of deceased exceeded 20,000, with a lethality of 4.48%.