The authorities recognized the need to put the economy into operation, hit by seven months of closures and restrictions and by U.S. sanctions that seek to suffocate the island’s finances to force a change in political model. 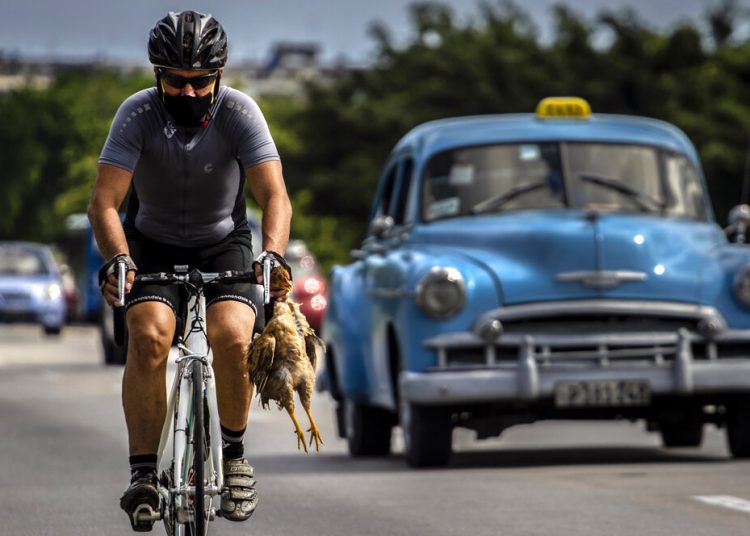 A cyclist wearing a mask as a precaution against the spread of the new coronavirus carries a chicken in his hand while pedaling his bicycle in Havana, Cuba, on Sunday, October 11, 2020. Photo: Ramón Espinosa/AP.

Cuba changed its strategy this Monday to face the new coronavirus through a “new normal” that includes open public offices and shops and citizens’ greater mobility, but with the mandatory use of masks and maintaining social distance.

In addition, the isolation in special centers of contacts of suspected cases will no longer be compulsory, as has been done so far, and domestic and foreign passengers could be received at all airports, except in Havana.

The authorities recognized the need to put the economy into operation, hit by seven months of closures and restrictions and by U.S. sanctions that seek to suffocate the island’s finances to force a change in political model.

“We have never had that dilemma between health and the economy…the first thing is always the health of our people,” Deputy Prime Minister and Minister of Economy Alejandro Gil Fernández said this Monday in an appearance on primetime television. However, he underlined that in monetary terms the country’s situation is “very tense.”

Although this “new normal” will be applied in most of the country’s provinces after weeks of control of the epidemic, in Havana, home to two million people and which had a complicated outbreak in August, there will still be limitations.

The authorities also asked citizens to support the state effort through self-care to prevent the transmission of the virus.

“It is very difficult to be at home, we hope we will all be conscious because now it depends on all of us,” María Isabel Batista, a 58-year-old artisan, told The Associated Press.

Since March, when the first cases of COVID-19 were detected, the island has been closed to tourism, the most dynamic sector in the country and with annual revenues of close to 3 billion dollars and a similar figure for private entrepreneurs who operate homes for rent, restaurants or shops.

All sectors were affected, from farmers, through transportation and services, as well as the remittances sent to the island by Cubans living abroad.

Independent workers, emerging and still vulnerable economic actors, were among the most affected. Minister Gil Fernández indicated that 250,000 entrepreneurs―of the 600,000 existing ones―had to suspend their licenses and 150,000 state workers interrupted their activities.

According to the Economic Commission for Latin America and the Caribbean (ECLAC), the drop in Cuba’s Gross Domestic Product will exceed 8% this year.

“Today we are at a time when the level of discharges exceeds the daily cases (of COVID-19), in which Havana has come to be more controlled…and there is a group of provinces that have lived several months without reporting cases,” said President Miguel Díaz-Canel last week when announcing the new strategy to face the coronavirus.

Primary care―the rapid diagnosis of cases, isolation, and house-to-house screenings by doctors and nurses―was one of the bases for achieving relative control of infections and low mortality.

On Monday the Ministry of Public Health reported that 22 new cases had been detected for almost 6,000 contagions since March, of which 123 have died.

Although aware of the economic needs facing the island, the lines and the shortages, not everyone agreed due to the fear of a new outbreak.

“I’m not happy because I have children,” said Edilia Delgado, a 35-year-old state worker who is concerned that her children will have to go back to school.

On October 15, Varadero beach resort will open for international tourists, to be added to the hotels in the keys opened in July and it is expected that on November 2, face-to-face classes will resume in Havana, although in the rest of the provinces children are in school since September.

Tourists will undergo mandatory testing and epidemiological monitoring while on the island.

At the same time, Minister Gil Fernández reported that work is underway on a plan to boost the economy that includes from promoting farmers―removing obstacles to their production―to encouraging exports and making self-employment more flexible―small private entrepreneurs.

In this sense, he announced that a regulation will be released “before the end of the year” that will expand the possibilities of action of the private sector, emerging, small and still highly stigmatized in Cuba.