The official who directs the operation in the Guantánamo municipality of Maisí explained that in this first trip, 350 of the 421 migrants who currently remain in the easternmost territory of the island will be transferred. 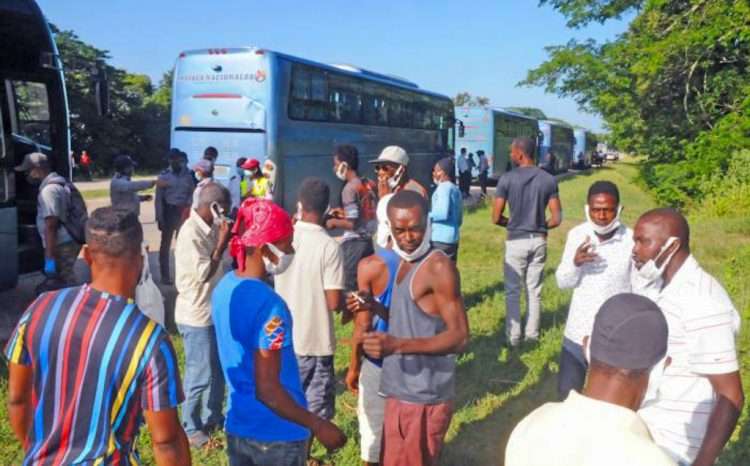 A group of Haitian migrants stranded in Cuba waits to board the buses that will take them to the port of Santiago de Cuba, to return to their country. Photo; granma.cu

This Thursday Cuba began the process of repatriation of Haitian immigrants who landed on the coast of Maisí, in the province of Guantánamo, while trying to reach mainly the United States and the Bahamas illegally.

The municipal government official who directs the operation, Yaudis Gómez, explained that in this first trip, 350 of the 421 migrants who currently remain in the easternmost territory of the island will be transferred, according to the official Cuban press.

Gómez explained that they had 14 buses to transfer the group of Haitians to Santiago de Cuba, from where they will continue the boat trip to their country.

The official pointed out that the remaining 71 will also return to Haiti, but for the moment they remain in the Punta de Maisí camp, created in the 1970s by the Cuban Red Cross for undocumented migrants.

According to him, in that place “basic services are guaranteed” such as accommodation, water and health care, with a medical post that operates round the clock.

The Cuban authorities also assure that the return of the Haitians to their country has been a voluntary decision of the migrants themselves.

For his part, the president of the Association of Haitians and Descendants in Cuba, Francisco Díaz, referred to the “good treatment and speed” with which the Cuban government acted to resolve the situation, a process, he confesses, which he has witnessed on four other occasions since taking office.

According to the source, all Haitians were screened for diseases, four of them tested positive for COVID-19, were isolated from the rest, and received treatment until they recovered from the disease.

Medical care was also given to “an eight-week pregnant woman, and a woman with a uterine fibroid, as well as 18 minors with scabies and other skin diseases, due to heat stroke from the long time they were at sea,” the press report said.

At the end of September, the Cuban Ministry of Foreign Affairs (MINREX) reported that it had received and assisted several Haitian migrants, stranded on the island on their maritime journey to the United States, and that it would return them to their country of origin.

The Haitians, whose boats reached the Cuban shores in recent days, “have received all the necessary care, including medical assistance, and remain housed in various facilities equipped for this,” as a Cuban Foreign Ministry press release explained then.