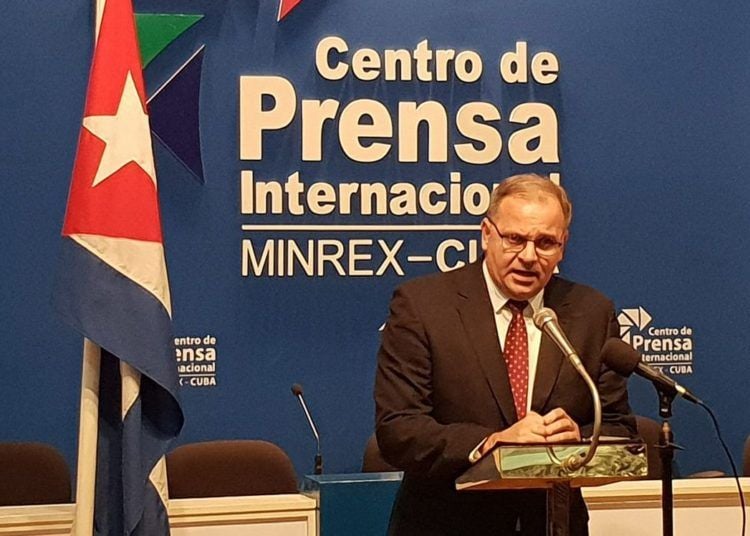 Eugenio Martínez, general director for Latin America of the Cuban Foreign Ministry, during a press conference in which he criticized the holding in Washington of an OAS conference on the Cuban constitutional reform. Photo: @CubaMINREX / Twitter.

The Cuban government considered a conference organized this Tuesday in Washington by the Organization of American States (OAS) on the constitutional reform in Cuba as a “ridiculous anti-Cuban show.”

Eugenio Martinez, general director of the island’s Foreign Ministry for Latin America, presented to the press an official statement that criticizes the position of Secretary General of the OAS Luis Almagro, who summoned the conference “following the plan dictated by the government of the United States.”

Martinez said that Cuba “does not recognize the moral or legal authority” of the OAS and considered it “striking” that Almagro, “with his particular anti-Cuba obsession,” reiterate “vulgar slander and lies” and that he ignore “so many issues of real urgency” in Latin America, to which, according to the Ministry of Foreign Affairs (MINREX), “he does not devote the same energy, time or resources” that he does dedicate to the island.

The diplomat also said that “neither Almagro nor the OAS has the right to debate about the constitution of a State that is not part of it or intends to be,” and that, therefore, is not “subject to its system of treaties, with which it has no obligation.”

The MINREX statement affirms that the secretary general “disrespects the very letter of the OAS Charter, which establishes the nature of its functions, among which autonomy or capacity to orchestrate this type of actions is not recognized and which have not received a special mandate from the member States.”

In addition, he recalled that “the OAS is an organization at the service of the United States which is why it supported attempts to isolate Cuba, military interventions in Latin America, dictatorships and ignored condemning the most abominable tortures in the region.”

He said that Cuba’s constitution “emanates from the sovereign authority” of the Cuban people, “who democratically debated the draft Magna Carta,” and affirmed that Almagro is making a mistake by “repeating the plan so many times tested against Cuba.”

“The Cuban Constitution is discussed and approved by Cubans and will be confirmed on February 24,” Martínez concluded.

At the Washington conference, the General Secretariat of the OAS considered Cuba’s constitutional referendum “illegitimate” and said that this measure only serves to “mask” the “dictatorship” before the international community.

Luis Almagro, who was scheduled to speak yesterday at the conference, whose name was “The new Cuban Constitution and the Inter-American Democratic Charter,” could not attend “due to an unforeseen event” and was replaced by his advisor, Christopher Hernández, who accused Havana of using the “language of democracies” with terms like “assemblies, elections and referendums” to provide a “false image.”

Cuba was a member of the OAS since its creation in 1948 but left the organization in 1962 after the triumph of the Revolution led by Fidel Castro. After decades of confrontation, in 2009 the OAS lifted the island’s suspension, but Havana refused to return to its ranks.