“The purpose of this visit is that we can translate that closeness and affection between the two peoples into cooperative actions that allow us to offer positive results in the coming months and years,” said Mexican Foreign Minister Marcelo Ebrard. 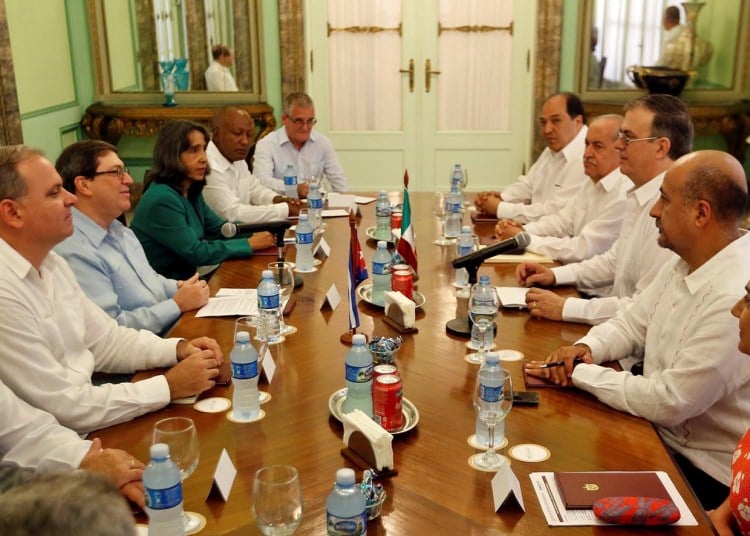 The foreign ministers of Cuba, Bruno Rodríguez, and of Mexico, Marcelo Ebrard, met this Saturday in Havana as a first step to relaunch the “historical” bilateral ties and open a new “better and broader” stage in the cooperation between the two countries.

Rodríguez received Ebrard at the headquarters of the island’s Ministry of Foreign Affairs, three weeks after the official visit of Cuban President Miguel Díaz-Canel to Mexico, in which he agreed with his counterpart Andrés Manuel López Obrador a new short- and medium-term collaboration program.

We are here to “start a better and broader stage in the two countries’ relations.… The purpose of this visit is that we can translate that closeness and affection between the two peoples into cooperative actions that allow us to offer positive results in the coming months and years,” said Ebrard.

The Mexican foreign minister explained that this is “a first conversation in that direction” and said that “there will be many subsequent tasks” and “surely good news for our peoples.”

“Cuba has always been and will continue to be an extremely close country for Mexico, not only in geography, but also in culture and values,” said Ebrard, the right-hand man of López Obrador, who since he came to power hasn’t made any state visit abroad and has delegated that responsibility to his foreign minister.

For his part, the Cuban minister highlighted “the special and trustful relations that exist between Mexico and Cuba” and reiterated the desire to strengthen ties in all areas, “ranging from the cultural, academic, scientific to the economic, commercial, cooperation and political.”

He recalled that Mexico is Cuba’s second largest trading partner in the region and the sixth in the world, in addition to being the first issuer of tourists to the island in the area and eighth internationally.

“Cuba will never forget that Mexico was the only country that did not break diplomatic relations with Cuba at that time of attempted isolation (when the United States established the embargo in 1962),” said Rodriguez, who thanked the North American nation for the recent vote against the “blockade” in the United Nations.

Relations between Cuba and Mexico have strengthened since López Obrador, leader of the leftist National Regeneration Movement (Morena), assumed the presidency on December 1, 2018.

Very close geographically―only a one-hour flight separates Cancun and Havana―both nations have maintained unbroken diplomatic ties since 1903 although with their ups and downs.

The Mexican presidents of the Institutional Revolutionary Party (PRI) opted for a policy of non-intervention in Cuba, but relations became tense during the mandate of right-wing Vicente Fox (2000-2006), who had a much-talked-about and public encounter with Cuban President Fidel Castro at a UN summit held in Mexico.

With the arrival to the presidency of Enrique Peña Nieto (2012-2018) and the return of the PRI, relations again became cordial and the Mexican president traveled to Cuba in 2016 to participate in Castro’s funeral, defining him as an “emblematic 20th century referent.”