Under a persistent rain more than 5,000 runners participated in the 33rd edition of Havana’s Marabana 2019 marathon, dedicated to the city’s 500th anniversary. 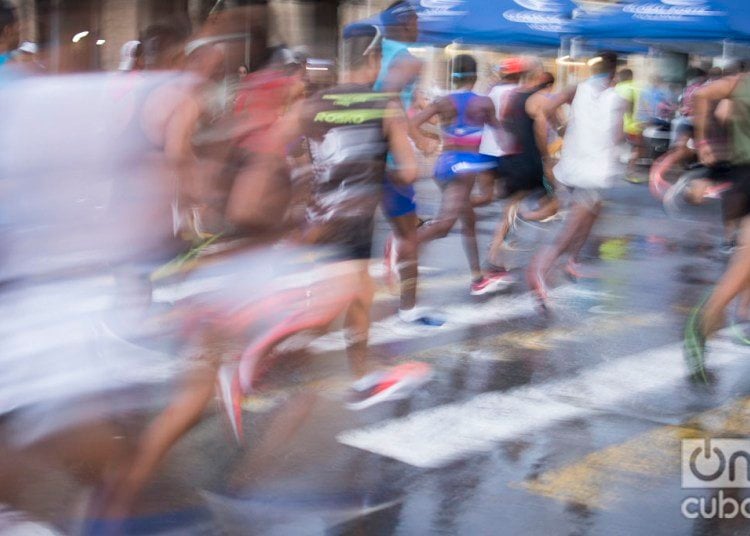 The rain commenced almost from the start of the 33rd edition of the Marabana race, a competition dedicated this year to the half-millennium of the Cuban capital and that registered a record of participants, with a total of 5,858 runners, of whom more than 1,300 were foreigners.

At 6:30 in the morning the runners took off from the starting point and finish line located in the Parque Central, to cover the marathon distance of 42.125 kilometers, a distance that for the third time was dominated by the ladies: Santiago de Cuba’s Yudileivis Castillo (2:43:05), followed by Liuris Martha Figueredo from Mayabeque (3:05:05) and the Italian Gabriele Toffoli (3:09:32).

The males were dominated by the province of Granma: Alien Reyes reached the finish line with a time of 2:37:22, while Alexis Machado and Yoel Ricardo Hernández seconded him with 2:42:50 and 2:45:00.

This is the fifth medal in this race for Reyes, who had previously won three bronze and one silver medals and is currently preparing to participate in next year’s marathon in the Spanish city of Madrid.

Other outstanding results were in the men’s half marathon, with the podium full of Cubans: Yuleidys La O Terrero (1:09:25), Dairán Suárez (1:10:39) and Francisco Rodney Estévez (1:10:45), one of the hardest fought in the morning.

In the 10 km modality, representatives of the island in both sexes stood out: Maher Salah Mahroos (0:37:24) among the men and for the women Dayli Marlin Copper (0:38:25). In the race for athletes with disabilities, Ángel Alexis Ortiz came in first in the category of deaf, with a time of 0:46:31, and Jorge Ulises Calzada won in the category of wheelchair with 0:42:26.

The rain was the protagonist of Marabana 2019 where thousands of runners and enthusiastic lovers of physical activity withstood the ravages of the weather and toured the streets of Havana, a city that will celebrate its 500 years on November 16.