The tense situation in Cuba has mobilized renowned artists. 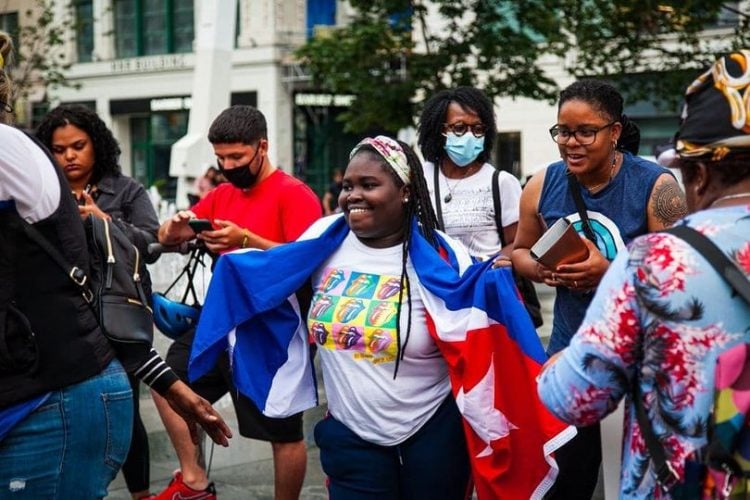 Some Cuban artists have made their criteria known on social networks on the occasion of the day of protests that took place in Cuba this July 11, in which thousands of people took to the streets to demonstrate.

From the first moments of the demonstrations, several artists called for non-violence and to avoid confrontation among Cubans themselves in the midst of clashes between protesters and groups called by the government in response.

One of the first voices to express herself was singer Dayme Arocena: “Demanding our rights is not a crime! Public spaces are ours! Let it be heard loud and clear!”, the young artist wrote this July 12. Yesterday she considered: “the peaceful demonstration is totally legitimate. It is the way of communicating to democratic governments that there is a request for attention in the face of general discontent in society.”

Urban-genre singer Yomil (Roberto Hidalgo), who shared his participation in the protests in the National Capitol area live via Instagram, was detained by the police and released a few hours later.

Young Cuban playwright Yunior García, who was one of the protagonists of what happened at the Ministry of Culture on November 27 of last year, recounted his experience on his Facebook profile “…when he saw the images of the protest in San Antonio de Los Baños, a group of young artists decided to go to the ICRT to demand transparency. We have always rejected violent paths, so we arrived peacefully and asked for 15 minutes before the cameras of Cuban television to exercise the right to reply, call for a democratic solution to our conflicts, condemn the repression and find a bloodless solution to the total crisis that we Cubans are experiencing.”

On the other hand, artists such as Alexis Leyva Machado (Kcho) and the director of the Buena Fé group, Israel Rojas, have publicly expressed their support for the Revolution and took to the streets to express it. The visual artist described the call for protests as an “act of irresponsibility” in the midst of the COVID-19 pandemic. On the other hand, Israel Rojas declared that “the Revolution is not a perfect process, it is a perfectible process, which leads, deserves and requires deep revolutionary criticism but from there to believe that it is a pedestrian process that deserves to die, don’t count on me for that. Here I am to continue having the right to build a better, independent and sovereign country.” The statements of both artists were published by Canal Caribe on its Facebook profile.

Erick Iglesias, the renowned singer Cimafunk, also called for calm in the midst of difficult circumstances: “Listen to the people, there are mothers, fathers, sons, daughters asking for something better for everyone. No to violence!!!”, he posted on his official profile on Facebook and also on Instagram.

For his part, audiovisual producer Joseph Ross called on the Cuban government not to incite violence among Cubans by saying that “the president of the country himself and the national media cannot call for a civil war in the streets of the country when a pandemic is at its worst.”

Singer Haydée Milanés posted on her official Facebook profile that the island’s government has an obligation to listen to the people. “It is inadmissible that the authorities are calling for a confrontation between Cubans” in an end to repression and violence. Haydée, who has also been using her Twitter account to refer to the situation in Cuba, pointed out on that platform that “the Cuban people have expressed themselves…the government has an obligation to listen to them.”

Percussionist Brenda Navarrete also made a call for peace and non-violence on her personal Instagram profile this Sunday, through a post in which she also asked for “peace and conscience.” Likewise, actress Alicia Hechavarría and musician Alain Pérez asked on Instagram for the cessation of violent acts, for there to be peace and for the people to be heard. 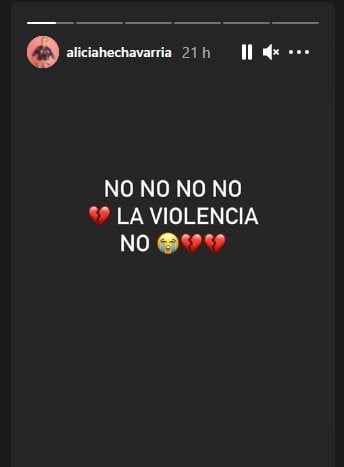 Renowned jazz player Chucho Valdés asked on his Facebook profile this Sunday 07/11 for a stop to “deceptions and lies” and said that international humanitarian aid was essential.

For his part, the award-winning Cuban musical composer Leo Brouwer expressed on his Facebook profile his pain and sadness for what is happening on the island. 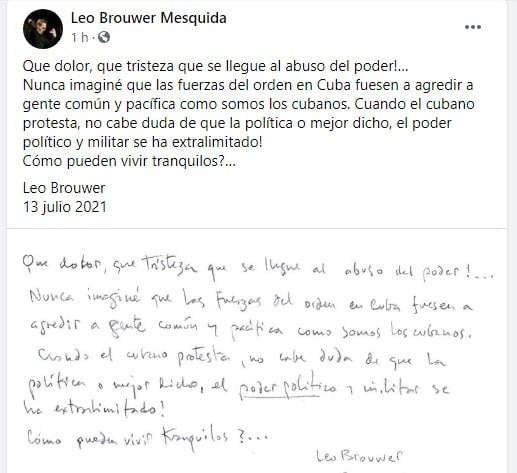 Renowned musician José María Vitier also expressed what he feels through his Facebook profile: “Everything hurts too much. Hate or this confrontation between Cubans is not admissible. Neither does foreign interference. The people are the source of law. You have to listen to them.”

The founder and leader of the popular orchestra Adalberto Álvarez y su Son expressed: “It is impossible to remain silent in the face of everything that is happening in our country, the blows and the images that I see of violence against a people that take to the streets to express what they feel peacefully hurt me, the streets of Cuba belong to the Cubans, to those people I owe what I am today and I do not care about the way of thinking of each one of them because that is the right of each one and beyond political thought is the human right, so I cannot do less than to be by their side in such difficult times. It hurts to see how we Cubans attack each other verbally and physically, it hurts to see the knuckle-busters in the hands of the authorities to attack defenseless people. To those who ask me which side I am on, I am with the people.”

The iconic Los Van Van orchestra also spoke about the events on the island: “Cuba’s Los Van Van exist thanks to our Cuban people, therefore we will always support the people, whoever they are, whatever they think, no matter the ideology they defend, with the utmost respect, let us not forget that we are Cubans, of the same race.”

The current leader of the group, Samuel Formell, signed the post on the official Facebook page, where he specified that they support “the thousands of Cubans who demand their rights, we must be heard.”

“Let’s say no to violence, and to violations, let’s call for Peace in our streets,” he concluded.