The president and foreign minister of Cuba received the archbishop of the Archdiocese of Boston, who also exchanged with Cuban scientists and participated in a mass on the Day of Our Lady of Charity of El Cobre. 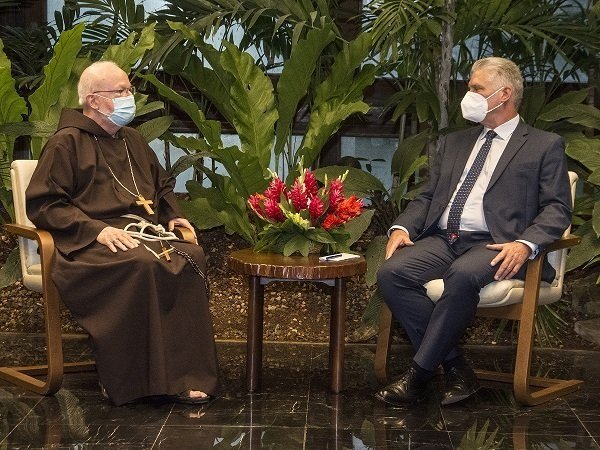 Cuban President Miguel Díaz-Canel, during his meeting in Havana with the Cardinal and Archbishop of the Archdiocese of Boston, Sean Patrick O’Malley, on September 9, 2021. Photo: @JohanaTablada/Twitter.

Cuban President Miguel Díaz-Canel received this Thursday in Havana the cardinal and archbishop of the Archdiocese of Boston, Sean Patrick O’Malley, the state media reported.

Cardinal O’Malley began last Tuesday a visit to the Caribbean nation invited by the Archbishop of Santiago de Cuba, Monsignor Dionisio Guillermo García Ibáñez, with whom he concelebrated a mass the day before for the feast of the island’s Patron Saint, Our Lady of Charity of El Cobre, in her sanctuary in that eastern province.

“His Eminence, who has previously traveled to Cuba, was received with hospitality and respect,” said a statement about the meeting, which was attended by Cuban Foreign Minister Bruno Rodríguez, with whom the representative of the Catholic Church of the United States had previously met.

During his dialogue with the cardinal of Boston, the head of Cuban diplomacy thanked the U.S. Conference of Catholic Bishops’ statements — on more than one occasion — “in favor of improving bilateral relations with Cuba,” indicated a note published on the website of the Ministry of Foreign Affairs.

Rodríguez also updated the U.S. prelate on “Cuba’s situation and plans in various spheres,” as well as the results of the COVID-19 vaccines created by scientific institutions of the Caribbean country, and addressed the impact of the U.S. financial and commercial embargo.

In both meetings, Cardinal O’Malley was accompanied by the Apostolic Nuncio to Cuba, Giampiero Gloder.

In addition to visiting Catholic dependencies, the Archbishop of Boston exchanged with scientists from the Center for Genetic Engineering and Biotechnology (CIGB), the institution that created Abdala — one of the Cuban COVID-19 vaccines — and there he learned about the vaccines, medicines and equipment with which the island if fighting the pandemic.

“The Roman Catholic archbishop of Boston, Cardinal Sean Patrick O’Malley, met with Cuban President Miguel Diaz-Canel on Thursday and visited a Cuban COVID-19 vaccine laboratory at a time of tense relations between the U.S. and #Cuba.” – @AP https://t.co/y3uyEcF8r3

On his previous visit, the Archbishop of Boston attended the funeral service of Cuban Cardinal Jaime Ortega, who died in July 2019, when he celebrated the last mass of his funeral officiated by the Archbishop of Havana, Monsignor Juan de la Caridad. Garcia.

Cardinal O’Malley was ordained a priest of the Order of Capuchin Friars Minor in 1970, participated in the 2013 conclave and is one of eight cardinals chosen by Pope Francis to assist him in governing the Church and reforming the Roman Curia.

The prestigious prelate, who chairs the Pontifical Commission for the Protection of Minors, returned this Thursday to the island of Hispaniola, which includes the Dominican Republic and Haiti, from where he traveled to Cuba after making a visit to support the Haitian victims of the recent earthquake.

This new trip by O’Malley to Cuba takes place amid the current tensions in relations between Havana and Washington, when it was expected that the administration of Democratic President Joe Biden would bring a new rapprochement after the setback that marked the Republican Donald Trump’s administration (2017-2021).

In December 2014, the then presidents of Cuba, Raúl Castro, and of the United States, Barack Obama, announced the reestablishment of bilateral diplomatic relations, broken since 1961, which led to a climate of unprecedented detente after half a century of enmity and disagreements, which had the discreet mediation of the Cuban Catholic Church and Pope Francis.