Of those sanctioned, 297 received sentences of up to 25 years in prison, according to the district attorney’s office on its website. Among those sentenced there are 16 young people aged between 16 and 18, of which the prison sentences of 15 were replaced with other alternative sanctions. 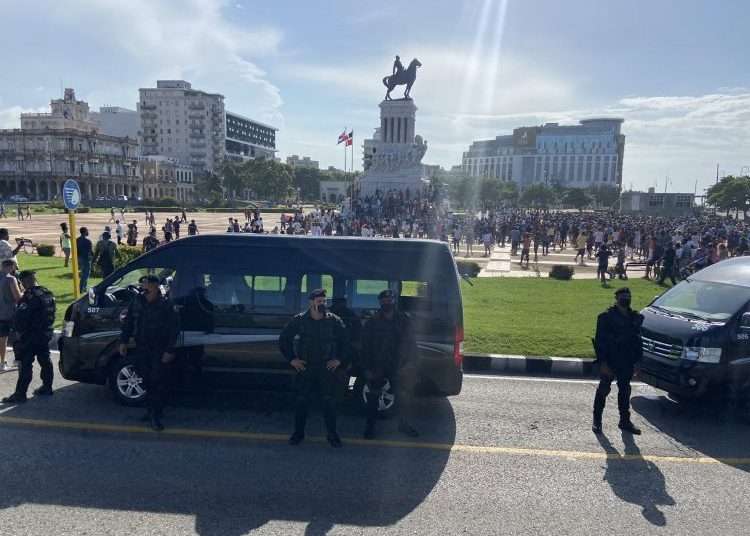 In the image, scenes from the protests of July 11, 2021 in Havana. Photo: @reuterssarah/Twitter/Archive.

The Attorney General’s Office of the Republic of Cuba (FGR) reported this Monday that so far 381 people have been sanctioned for the July 2021 anti-government protests, 16 of them aged between 16 and 18 years.

In a note published on its website and shared on its social network profiles, the FGR assured that “after the period for the defendants or the district attorney to establish the appeals against the sentences handed down, in exercise of the right that assists them legally, or because these have been resolved,” the courts notified 76 final sentences.

“Of the 381 people who were sanctioned there were 16 young people aged between 16 and 18, mainly for crimes of sedition; sabotage; robbery with force and violence; attempt; contempt and public disorder,” confirmed the statement, according to which “297 defendants were imposed prison sentences, based on the seriousness and circumstances in which the events occurred and personal conduct.”

“For the crime of sedition, 36 were sanctioned; they were sentenced to between 5 and 25 years of imprisonment,” the note added.

According to the district attorney “84 defendants were subsidized the sanction of imprisonment, for other alternative penalties that do not imply — in principle, under the condition of good conduct —, their imprisonment.” Among these alternative penalties are those of correctional labor with and without internment, and limitation of liberty. “This decision includes 15 of the young people between the ages of 16 and 18,” the FGR said.

In Cuba, the minimum criminal age is 16 years.

In its note, the FGR recalls that “the breach of the obligations imposed by the Court in its sentences or the commission of a new criminal act, results in the revocation of the subsidiary sanction and the fulfillment of the rest of the original sentence in prison.”

In addition, it affirms that “in the sentences issued, the People’s Courts ruled in each case for the civil responsibility of compensating the people who were injured, as a consequence of the acts committed, and the reparation of the damages caused to the entities.”

And finally, it points out that “at this time, it corresponds to start the process of executing the firm sanctions imposed, and to ensure during their compliance that their educational, coercive and preventive purposes are achieved, the reinforcement of values, the rectification of behavior of those sanctioned and their social reinsertion.”

For her part, the chief prosecutor of the Department of Criminal Proceedings of the Attorney General’s Office of the Republic, Lisnay María Mederos, commented to the official Cubadebate website that “during these processes, compliance with the constitutional rights and guarantees of the due process was established and the investigations carried out by the agencies of the Ministry of the Interior were controlled.”

“The attorneys maintained communication with their clients, agreed to the proceedings and provided the evidence they considered appropriate,” added Mederos, who said that the prosecution’s actions “was based on a set of documentary, testimonial and expert evidence, which made it possible to establish and determine the participation of the accused in acts that are typified as a crime in the current Penal Code.”

The foregoing contrasts with the testimonies of activists and relatives of the sentenced, who have alleged lack of guarantees, fabrication of evidence and other irregularities in the processes, while criticizing the high sentences imposed, although it was recently reported that the island’s Supreme Court had reduced the sentence of some demonstrators.

According to the EFE news agency, the numbers released this Monday do not coincide with those published by different NGOs since the J11 trials began at the end of 2021. Prisoners Defenders, for example, noted on June 8 that a total of 168 demonstrators had been prosecuted solely for the crime of sedition and that 246 had firm prison sentences of 10 years or more.

This Madrid-based organization itself has indicated that at least 1,046 people were in prison on the island as of May for political reasons, mostly due to the July 2021 protests. Neither the Cuban authorities nor the official media acknowledge the existence of political prisoners in the country and attribute to these people crimes such as those that motivated the processes against the demonstrators.

At the end of May, the organization Justicia 11J reported that 519 of 564 people who had been tried in Cuba for the demonstrations — 92% — were convicted and 40 were still awaiting their sentence, the Spanish media pointed out.

For its part, the FGR itself assured in January that 790 people had been prosecuted for “acts of vandalism” and “serious disturbances of order,” of which 55 were between 16 and 17 years old.

The district attorney’s office then assured that in these cases it has verified “compliance with the constitutional rights and guarantees of due process,” despite the “manipulations and opinion matrices, which seek to accuse Cuba of human rights violations.”

According to the statement issued on that occasion, after the investigation was concluded, the FGR received 117 preparatory phase files on the events of “highest connotation,” these files implicated 790 people instructed “for acts of vandalism, attacking authorities, people and property, as well as serious disturbances of order.” According to the note, 21% had criminal records.

Of that total, 110 files had been presented to the courts at that time, with 710 defendants for trial. Of these, 69% remained in provisional detention as a precautionary measure while awaiting trial.

To get to the North: the (legal) route of Guyana