The two doctors will work at the medical post established at the Cuban embassy in Beijing, where they will monitor the situation of the disease and guide Cuban personnel in the prevention of the epidemic. 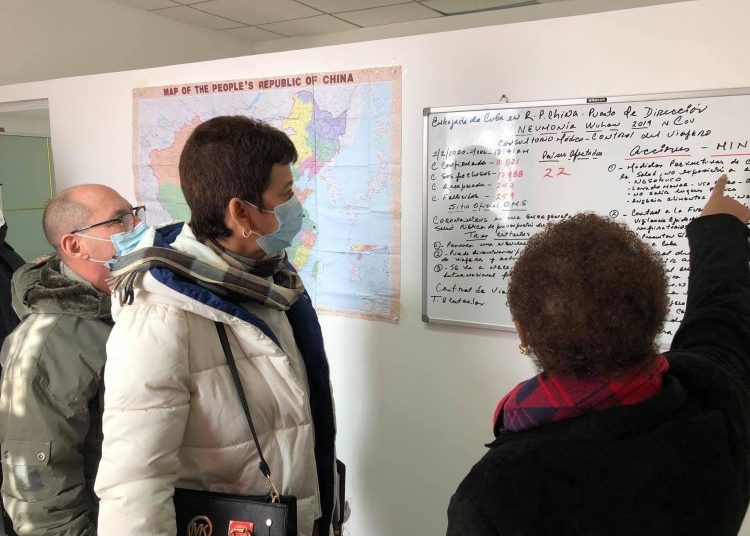 Cuban doctors who arrived in China to strengthen, from the medical post of the island’s embassy in Beijinig, the fight against the new coronavirus. Photo: @EmbacubaChina / Twitter

Two Cuban doctors arrived in China to “strengthen the fight” against the new coronavirus, the cause of the so-called Wuhan pneumonia, the official daily Granma reported this Monday.

The publication, citing a tweet from the Cuban Embassy in Beijing, ensures that the doctors will work at the medical post established at the island’s diplomatic headquarters, where they will monitor the situation of the disease and guide Cuban personnel in the prevention of the epidemic.

With the purpose of monitoring #coronavirus and guiding Cuban personnel in #China, we established in our Embassy a medical post now reinforced with the presence of two newly arrived doctors from #Cuba to help us in preventing the epidemic. #Cuba #FuerzaChina @MINSAPCuba pic.twitter.com/V0soGzODs9

Granma reiterated the message published three days ago by the island’s ambassador in Beijing, Carlos Miguel Pereira, in which he assured that no members of the Cuban community residing in China had been affected.

In addition, he said that the embassy and consulates are reviewing “daily” the situation of the Cubans residing in the Asian country―where more than 17,000 infected people have already been reported―as well as compliance with sanitary measures directed by the Chinese government, among them “avoiding public agglomerations, taking preventive epidemiological surveillance measures, and following the local authorities’ instructions implemented in the places where they are.”

In particular, he said that there is “direct communication” with the 10 Cubans residing in the city of Wuhan, the origin of the epidemic and which remains isolated, and that “all are well and complying with the measures.”

He also said that the 92 Cuban students who are currently in China “are well” and “are following their universities’ instructions,” which have taken “additional measures,” such as checking the general state of health and temperature, in some cases up to twice a day.

Likewise, he said that the 50 Cuban students in Beijing were given KN95-type masks, acquired by the embassy, ​​while the general consulates of Guangzhou and Shanghai “are looking for alternatives to acquire masks and hand them over to students who need them in their respective jurisdictions.”

The diplomat reiterated his thanks to the Chinese government for the “transparent and updated information received from the Foreign Ministry, the health authorities, and the central and local governments, through all means, and in different languages.”

In addition, he described the work of the Chinese authorities as “commendable, responsible and top priority” to prevent the spread of the virus.

According to the latest data released, the new coronavirus has already infected more than 17,300 people worldwide, more than 17,200 in mainland China. In addition, there are 14 in Hong Kong and seven in Macau. Japan, Thailand, Singapore, South Korea, the United States, Taiwan and Germany also have ten cases.

In total, about 150 cases have been documented in two dozen countries outside of China. A 44-year-old Chinese man from Wuhan died of the virus in the Philippines and his companion was still hospitalized, according to authorities.

Most of the 361 deaths have occurred in the central Chinese province of Hubei, where the new type of coronavirus was first detected in December.

Meanwhile, the first patients arrived this Monday at a specialized hospital built in just 10 days as part of China’s intense efforts to combat the coronavirus. Beijiing sent medical workers and equipment to the 1,000-bed installation to treat the victims.

Huoshenshan Hospital and a second center with 1,500 beds that will open this week were built by crews working three shifts in Wuhan, where most of the 11 million inhabitants are prohibited from leaving the region.

In other cities in China, the government has designated hospitals to deal with cases of the new virus, while different governments and companies are taking measures to limit the access of people arriving from that Asian country.