After the earthquake the total collapse of a dwelling was reported, as well as cracks and other damages in some 300 houses and in state entities such as schools, day-care centers and agricultural facilities. 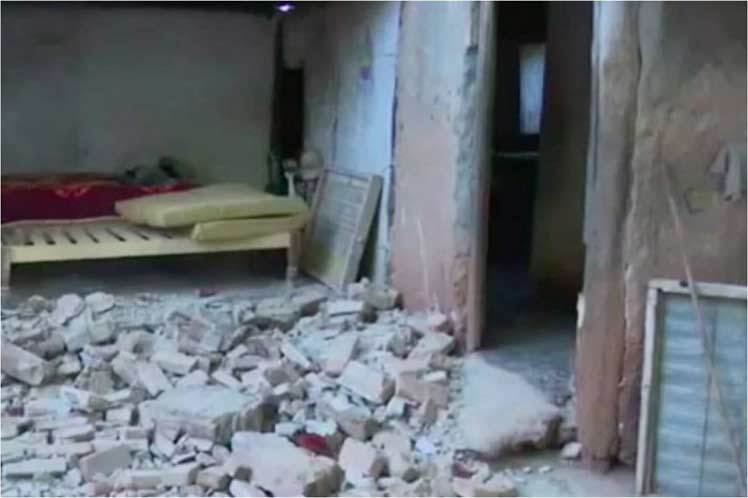 Damages to a dwelling in the Cuban province of Granma, after the earthquake of January 28, 2020. Photo: Prensa Latina.

The buildings damaged in Cuba by the strong earthquake last Tuesday south of the island were in “poor technical condition,” according to a specialist cited by the official newspaper Granma.

Dr. Darío Candebat, head of the Seismic Engineering Group of the National Center for Seismological Research (Cenais), told the media that this conclusion was reached after “an exhaustive examination” conducted in several territories of the southeastern province of Granma, the closest to the epicenter and, consequently, the most affected by the powerful 7.1-degree earthquake on the Richter scale.

The expert explained that after more than 20 hours of “intense work” in the towns of Pilón, Niquero, Cabo Cruz, Media Luna, Campechuela, Yara and Bayamo, “it was observed that the damages correspond to the aggravation of the state of the buildings that were already in a poor technical condition, as well as due to significant technical construction problems.”

On the other hand, he said, “those dwellings with good technical condition suffered no damage.”

Although initially the Cuban authorities, including President Miguel Díaz-Canel, stated that no victims or materal damages had been registered after the earthquake, subsequent reports confirmed, at least, the total collapse of a dwelling, as well as cracks and other damages in some 300 dwellings and also in state entities such as schools, day-care centers and agricultural facilities, mainly in Granma.

Given these reports, Díaz-Canel called for “attending immediately to” these damages during a government meeting on the national housing plan.

Regarding the seismic behavior in the area after the earthquake of January 28, Dr. Bladimir Moreno said that there was a “decrease in activity” and set the aftershocks until last Friday at more than 400, according to reports.

Moreno, who is the president of the Cenais Scientific Council, explained that they have been earthquakes of more than 2.5 degrees, but that they have not been noticeable on the island due to their remoteness. Around 70% of the aftershocks have been located in the Cayman Islands area, while most of the others have been produced in the area of ​​Cabo Cruz, closer to Cuba.

This Tuesday’s earthquake, with a magnitude of 7.7 according to the United States Geological Survey and 7.1 according to the Cuban seismological service, was recorded at 2:10 p.m. (local time), with an epicenter 139 kilometers northwest of Montego Bay, Jamaica, and 123 kilometers west-southwest of Cabo Cruz, in eastern Cuba.

According to Cenais specialists, cited by the state newspaper Granma, it is the “strongest earthquake recorded in an instrumental way in the history of the Cuban seismological service.”

The quake and several subsequent aftershocks shook several Caribbean countries, in addition to Cuba, mainly Jamaica and the Cayman Islands, and to a lesser extent Haiti, Belize, Mexico and Honduras. Even in Miami, in South Florida (USA), several buildings were evacuated.

The last significant earthquake that had occurred in Cuba was recorded on January 17, 2017, at 5.8 degrees on the Richter scale, and left no human or material damage. Meanwhile, the first perceptible tremor in Cuba in 2020 had shaken the eastern Cuban region of Caimanera, in the province of Guantánamo, on January 23 with a magnitude of 4.2 degrees without causing victims or damage.