The island’s 52 specialists will assist their colleagues from Lombardy, who are working under extreme conditions and in overflowing hospitals due to the rapid rise in the number of serious cases in that region of northern Italy. 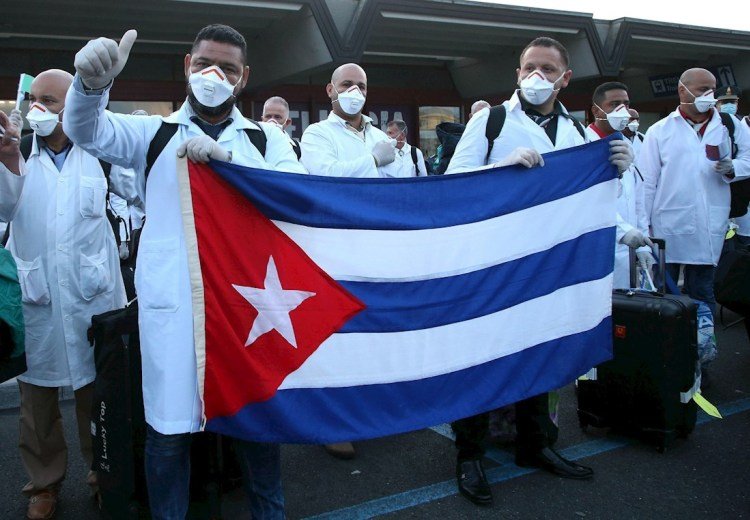 Cuban doctors and nurses after their arrival at Malpensa airport, Italy, to help in the fight against the COVID-19 pandemic, on March 22, 2020. Photo: Mateo Bazzi / EFE.

The Cuban medical brigade that traveled to Italy from Havana on Saturday to combat the COVID-19 outbreak in the Italian region of Lombardy arrived this Sunday in the European country, the current epicenter of the pandemic.

The group of 52 specialists, made up of 36 doctors, 15 nurses and a logistics specialist, was received by the Cuban ambassador to Italy, José Carlos Rodríguez, who greeted them when they got off the plane with a slight contact with the elbow, as he showed in a post on his Twitter account.

The Cubans, belonging to the Henry Reeve International Contingent–specialized in disaster situations and epidemics–landed at Malpensa airport, Milan. Their trip responds to the request for help from that northern Italian region, the one most hit by the pandemic in that nation.

The island’s specialists, highly qualified and experienced in other epidemics such as Ebola in Africa, will assist their colleagues from Lombardy, who are working under extreme conditions and in overflowing hospitals due to the rapid rise in the number of serious cases. In addition, they will join Chinese doctors who have arrived in the area with this same purpose.

Cubans are expected to carry out their work in the newly built field hospital in Crema, a city in Lombardy of about 17,000 inhabitants, Prensa Latina news agency reported.

This is the sixth medical brigade that travels to combat COVID-19 off the Island, where until this Sunday there were 35 confirmed cases and 954 patients hospitalized in isolation centers on suspicion of suffering from the disease.

Groups of Cuban specialists to help fight the coronavirus have already traveled to Suriname, Nicaragua, Jamaica, Venezuela and Grenada, according to the Cuban Foreign Ministry, and the departure of others to respond to new requests from affected countries is not ruled out.

In addition, medical cooperation members from the island are present in 37 countries with cases of COVID-19, although according to the authorities, no Cuban doctor has been infected.

Cuba suspends classes for a month due to coronavirus

The life that begins for Cuban doctors in Italy