The island's Ministry of Public Health reported 10 new cases this Sunday, which include three Canadian tourists, Cubans from abroad, and travelers’ contacts on the island and confirmed cases. 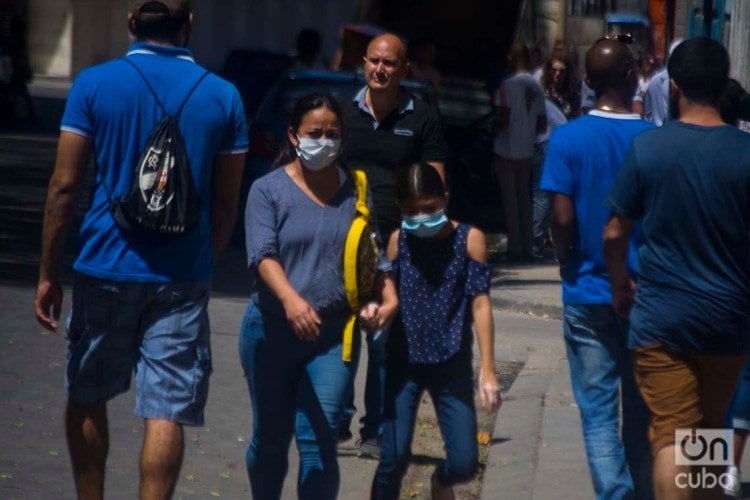 A mother and daughter using facemasks in Havana, as a protection measure against the COVID-19 pandemic. Photo: Otmaro Rodríguez.

The Cuban Ministry of Public Health (MINSAP) confirmed this Sunday 10 new cases of COVID-19 on the island, bringing the number to 35, including a deceased Italian tourist and a U.S. patient who was evacuated to his country.

In its daily report on the previous day’s events, the MINSAP offered details on the new patients, which include three Canadian tourists, several Cubans who arrived from abroad―including an 18-month-old boy and his mother―and travelers’ contacts on the island and confirmed cases.

The official note details that of the 33 confirmed patients who are hospitalized, two are reported in critical condition and one in serious, to whom “a medical team of specialists in Intensive Care and the Group of Experts of the Ministry of Public Health maintain permanent care and monitoring.”

The rest of the patients “present a stable clinical evolution,” it added.

Furthermore, the note affirms that 954 patients are currently hospitalized in the isolation and care centers created for clinical-epidemiological surveillance in the country; 255 of them are foreigners and 727 Cubans. Meanwhile, another 30,773 people are being supervised at home, through primary health care.

About the new cases, the MINSAP explains that among them are three Canadian tourists, aged 56, 66 and 76 years, staying in Havana and who after they began to show symptoms on the 16th, were hospitalized on the 19th at the Pedro Kourí Institute of Tropical Medicine, where they remain isolated and with satisfactory evolution.

Four Cubans who arrived from abroad are also reported, among them an 18-month-old boy and his mother, residing in Guisa, Granma province, and who, after being declared as suspicious of having the disease, were admitted to the Joaquín Castillo Duani Hospital, in Santiago de Cuba.

Finally, three other Cubans with no exits―at least recent ones―abroad were also confirmed. It is a tourist entertainer in contact with Italian visitors at Varadero beach resort― it is not specified whether the Italian tourists were considered suspicious or confirmed cases of COVID-19―, a woman who had contact with a confirmed case in Trinidad, and a 94-year-old woman, whose “possible source of infection” is her daughter, who arrived from Madrid and who days before had presented a “mild respiratory symptom,” although it was not clarified whether the test was performed.

The worldwide coronavirus pandemic has already infected more than 230,000 persons and killed more than 13,000, while more than 96,000 have recovered. In America, the number of cases shows an alarming rise, with more than 25,000 cases and nearly 300 deaths, with the United States, Canada and Brazil as the most affected nations.

Another 4 confirmed cases of Covid-19 in Cuba; a total of 25