The AR-9 is the first two-seater light aircraft prototype to be built in Cuba. It would have enough power to carry two people, in addition to reaching a minimum speed of 61 kilometers per hour and a maximum of 145, to climb a height of up to 2,000 meters. 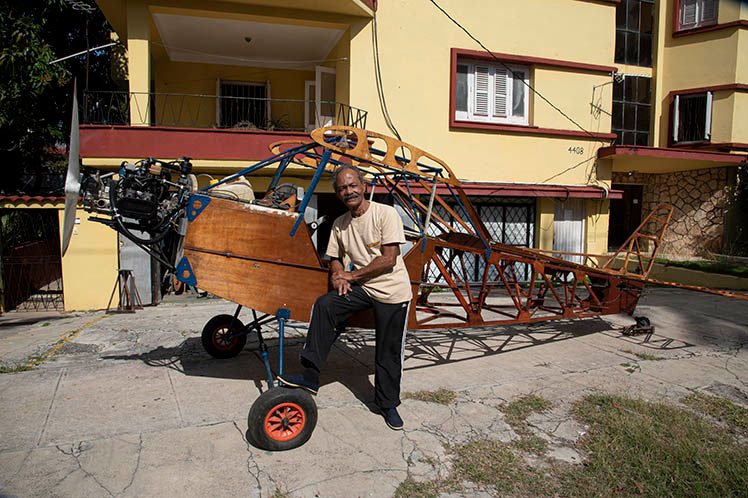 Rivera is a mechanical engineer who, together with a small group of collaborators, most of them related to the aeronautical sector on the island, has worked in the garage of the building where he lives with his family to carry out the project, according to a feature article published this Thursday by the Prensa Latina (PL) news agency.

The aircraft is handmade, but it is meeting the requirements of the Department of Engineering of the Institute of Civil Aeronautics of Cuba, since it has already successfully passed some tests. He is now waiting for the authorization of the lining of its skeleton, to then start taking off, the media reported.

The red cedar wings for the stringers and white pine for the ribs, Cuban hardwood recognized in U.S. aviation manuals for these tasks, are already in the improvised “hangar,” PL specified.

PL added that the novel aircraft will have an Austrian Rotax 582 two-piston engine in its nose and enough power to carry two people and a maximum weight of 400 kilograms. In addition, it could reach a minimum speed of 61 kilometers per hour and a maximum of 145, to climb a height of up to 2,000 meters.

It could also have a range of 300 kilometers, depending on the capacity of the fuel tanks it will load on the wings, according to Rivera.

Its creator is patiently waiting for the moment to receive the green light for flight tests. “It is a whole procedure, first you have to roll it. Then you raise the tail. Later you lift it a few meters and finally, when all that is fine, then to take to the air,” he told the agency.

Rivera confessed to PL that his passion for airplanes began in his native province of Cienfuegos, where he lived near the airport.

“That’s where this story began, in which I built gliders and learned to fly. It was a family party every time we made them fly by pulling the wire. I also did some ultralight aircraft and in 1986 I received my pilot’s certificate. René González was my checking instructor,” he recalled.

González, one of the five Cuban agents who were sentenced to long prison sentences in the United States accused of spying for the Cuban intelligence services, is the president of the Cuban Aviation Club, of which Rivera and his collaborators are members.

According to the report, the club has existed since 1933, and shares space with other groups dedicated to model aircraft, ultralight aviation, skydiving and free flight (paragliders and hang gliders).

González, who is also a pilot and flight instructor, acknowledged to PL that, although material shortages persist, he is betting on a takeoff of air sports on the island. In this sense, he stressed that they already have nine ultralight aircraft rescued at the border and a Cessna product of a donation that are ready to work for the club.

Regarding the viability of the new light aircraft prototype, he acknowledged Rivera’s dedication and sacrifice in this project and confirmed to the agency that he is confident “that the AR-9 will fly.”