“Today more than ever the transnational nature of the Cuban family is present and this Family Code favors the unity and communication of these families,” said Ernesto Soberón. 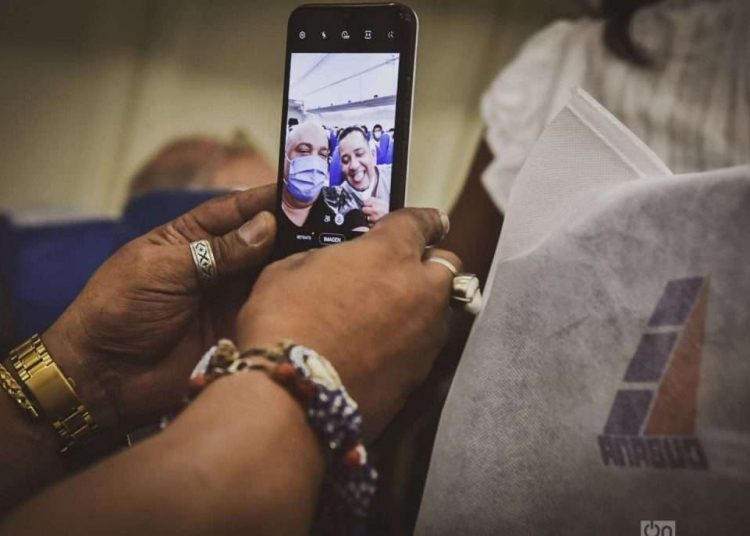 It is not necessary to be physically in Cuba to send to the authorities any proposal or opinion on the new Family Code. This was stated by the authorities themselves, who reported that as of this week all Cubans who are abroad can do so, if they so wish, through a space enabled on the Nación y Emigración website of the island’s Foreign Ministry.

Given the impossibility of participating in the in-person debates that are taking place in the country until the end of April, those who are outside of Cuba now have this alternative of issuing their criteria on a legislation that seeks to update the established regulations on family dynamics and relationships in its broadest spectrum and which is currently a source of controversy and conflicting positions on aspects such as same-sex marriage, adoption, domestic and gender violence, and parental responsibility in substitution of the concept of custody.

Faced with this scenario, the Cuban government, while defending the draft of the Code ― considering that it responds to the current diversity of Cuban families and offers more opportunities and rights to all its members ―, is also promoting specialized information spaces and a popular consultation with the declared objective of collecting the population’s criteria on the subject for consideration in the final text and, thereby, measuring the social temperature in the face of the referendum that must finally decide whether or not to approve the Code. And in this sense, the inclusion of Cubans who are abroad opens up the value range even more and is consistent with the reality of the country and its large community that travels or resides beyond its borders.

The participation of those who are outside the island seeks to contribute to the “collective creation” of the new legislation, as well as to promote, through this “democratic exercise,” the elaboration of “a more modern Family Code, which addresses the transnational dimension of the Cuban family and seeks to strengthen the bond and communication between its members,” Ernesto Soberón Guzmán, Ministry of Foreign Affairs (MINREX) general director of consular affairs and attention to Cubans residing abroad, said at a press conference.

In addition, it is part of “the will to strengthen and diversify relations between Cuba and its nationals abroad,” for which, according to the diplomat, the island’s government is promoting the participation of Cubans residing in other nations. in different processes of the country. In this sense, the official mentioned as background the consultation prior to the approval of the current Magna Carta, in which, he said, people living in more than 130 countries participated, and 40% of their opinions were considered for the final text of the Constitution. Similarly, he considered that this process also becomes a precedent for future consultations on other issues.

Now, this possibility of participation has the relevance of opening up at a time when the pandemic makes it difficult for a group of Cubans who are outside the island to return to the country and has made it necessary to maintain a set of measures to facilitate their situation. “This channel that we have enabled aims to ensure that no one is prevented from giving their opinion, wherever they are, and thus fulfill the fundamental objective of promoting participation in this process and that Cubans abroad can express their opinions to contribute to the drawing up of the Code, as already happened in the consultation for the Constitution,” Soberón commented to OnCuba in statements in which, however, he reiterated that “this participation is totally voluntary.”

Cubans who are not in the country and wish to express their views on the Family Code can do so, as already stated, through the Nación y Emigración website. There they will be able to access a digital form in which they can write their opinions and recommendations on this matter, in addition to registering their personal data, including their name, the place from which they write and their passport number. Regarding the bill in question, they must specify the paragraph and article on which they have an opinion, and explain their proposal to add, modify or eliminate, or, if applicable, leave a general or specific comment on any of aspects of the Code, as is happening in the debates on the island.

The Nación y Emigración website itself also offers the opportunity to download the draft Family Code and a help document that can be consulted before giving an opinion, as well as a tutorial with recommendations for filling out the form. According to Soberón, before being put into operation, all these computer mechanisms were verified, both from desktop computers and laptops as well as from mobile devices, in the 123 countries that have Cuban consular representation, for which, he affirmed, “all the conditions have been created” for the participation of Cubans abroad in this process.

The diplomat explained that people can access the website and send their criteria as many times as they consider pertinent, which means that the number of opinions that can be issued will not be limited. Even, as specified in an aside with OnCuba, someone who has already participated in an in-person debate on the island can use this route if they leave the country before April 30 ― the consultation’s closing date ―, or vice versa: do it first from abroad and then again give an opinion in a neighborhood assembly when they already back. In addition, the migratory status of people will not be taken into account ― whether they reside permanently or temporarily abroad, or whether or not they maintain their residence in Cuba ―, only if they are a Cuban citizen, which will be the only condition subject to official validation by the authorities.

As to the processing of the opinions issued, this will be a continuous process, for which the same mechanisms, structures and organizational criteria used for the collection and analysis of the comments given by the Cubans on the island will be used, according to what was said by Soberón in our media. As is known, this is a task for the commissions and working groups created by the government, in charge of processing a large amount of information with the support of computer tools, and whose effectiveness and impartiality are taken into account by the state authorities and media. They have also received questions about the handling and transparency of the data derived from the consultation.

“As the opinions arrive at our website, they will be processed through the established channels, in the same way that the opinions issued in the debates in Cuba are processed, whether they are modifications, deletions, additions or comments. This will be done systematically and responsibly, so that all the criteria of Cubans abroad have the opportunity to be evaluated to be included in the final draft of the Code, as already happened with the consultation on the Constitution,” said the official, who, however, recognized that “it is impossible for everyone’s opinions to be included in a final text.”

In addition, the head of the General Directorate of Consular Affairs and Attention to Cuban Residents Abroad (DACCRE) of the MINREX, confirmed the possibility that those who are outside the island can participate in the referendum that will finally define the fate of the Code, provided that “they can come to Cuba for the date on which the referendum is held and comply with what is established in the Cuban electoral law.” If so, “they will have every right to exercise their vote freely and democratically, for or against the Code, as they see fit.”

One aspect that, according to Soberón, gives more value to the participation of nationals abroad in this process is the transnational dimension of the Cuban family included in the Code. It is “a novel element, in tune with immigration policies that favor Cubans’ travel in one direction or another, based on the development of new information and communication technologies, as well as the increase in connectivity and internet access in Cuba and the world.”

To better understand the term, it should be noted that “not every family can be considered transnational, even if it has members residing in two or more national states,” as explained this week by María Ofelia Rodríguez, a researcher at the Center for Demographic Studies of the University of Havana, in the Mesa Redonda television program. According to the specialist, a family “becomes transnational when those ties are strong enough and acquire stability over time. They are families that feel and perceive themselves as a common unit, regardless of where their members are residing.”

In this regard, the MINREX official considered that “today more than ever that transnational character of the Cuban family is present.”

“Currently it is not causal to find the presence of members of the same family and of different generations living in different countries: parents living in one country, children in others, grandparents in others, and this Family Code favors unity and communication of these families, respect for the rights of all its members, the guarantees of minors and other vulnerable people, beyond the physical place where they are,” he said.

According to statistics shared by Soberón with the press, since the implementation in 2013 of a new Cuban migration policy ― and even with the logical decrease caused in the last two years by the pandemic ―, some 5.7 million Cubans’ trips abroad have been registered, made by around 1.3 million travelers, while more than 3.5 million journeys to Cuba have taken place by nationals who were outside the country. The foregoing, he pointed out, “makes it even more necessary that the conditions be created to facilitate our nationals abroad to participate in the popular consultation of the Family Code” and even more so considering that “as a result of the Cuban migration policy, there is a large number of people who, although residing abroad, also maintain their residence in the national territory, and thus retain rights and duties in our country.”

In addition, the diplomat highlighted the fact that this participation gives the process “a vision from another angle,” based on the experiences of those who reside outside the island. “Cubans who are abroad, whether or not they have residence in Cuba, have the perspective of how these processes and family relationships are developed and legislated in the country where they live and can then contribute to enriching our text based on that personal experience,” he argued.

For him, all of the above are more than enough reasons to arouse the interest of those outside of Cuba in this process, and encourage a broad issuance of opinions on the Family Code through the channel established by the MINREX. In this regard, he affirmed that he didn’t have “the slightest doubt” that Cubans in other countries will take advantage of this space and respond to the authorities’ call.

“From this perspective, it seems to us that it is of great interest for our nationals to be able to participate in the debate and contribute to enriching the text, to have a Code that is as inclusive as possible and that better responds to the reality of Cuban families today, which is not the same as it was 20 or 25 years ago,” Soberón pointed out. “Today’s is a totally different reality, and for this reason we have to update this legislation, as has been done with other legal instruments. That is why I haven’t the slightest doubt that this opportunity to express an opinion will be welcome, because it helps people feel involved in what is happening in their country, beyond the geographical distance that separates them, and I believe that this will be a step forward in terms of the link between Cuba and its nationals abroad.”