As part of a national plan to deal with illegalities, crimes and acts of corruption, “2,979 commercial establishments were identified” in which such violations are concentrated, Cuban Prime Minister Manuel Marrero said this Tuesday. 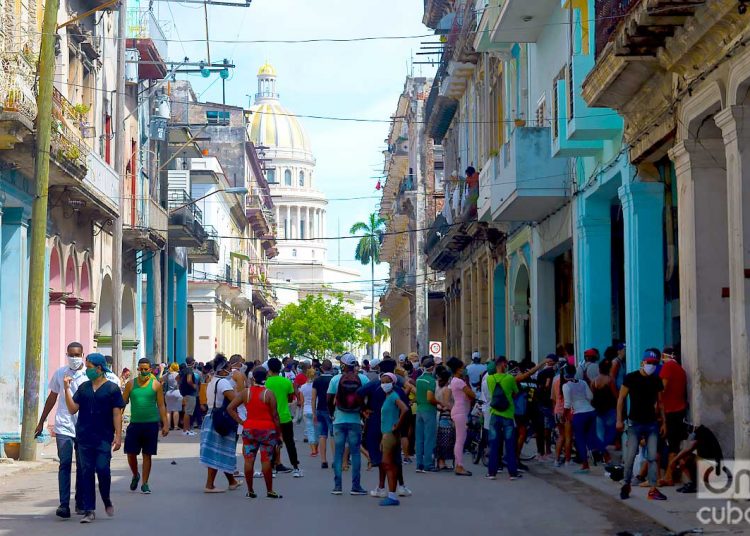 Cuba will assign 22,281 people to do battle against the speculation related to a chain that involves people who sell places on lines, hoard and resell products sold in stores and pharmacies throughout the island, the state media reported.

As part of a national plan to deal with illegalities, crimes and acts of corruption, “2,979 commercial establishments were identified” in which such violations are concentrated, Cuban Prime Minister Manuel Marrero said this Tuesday on the Mesa Redonda television program.

According to Marrero, “illegalities come in different forms, one of them is what is happening in the lines, which existed even before COVID-19 and are a consequence of the current context, but what cannot happen is that they become an element of risk or scenario of illicit economic activities.”

He explained that the people who sell places on lines are related to hoarders who “hire people, get in touch with workers from the establishments, rent spaces to create hidden warehouses, and then sell on social networks with total impunity and at excessive prices.”

Long lines have been common in Cuba during the health crisis caused by COVID-19, which came when the island was in the midst of an economic crisis, characterized by the shortage of basic need products in stores selling their merchandise in foreign currency.

“We, as the government, were the first ones to have recognized that there is a shortage and, in the midst of this situation, we are trying to give a little more,” Cuban President Miguel Díaz-Canel said in a speech broadcast on the television program.

Quoted by Cubadebate, the president said that “shortages cannot be the cause for there to be illegality, that is a dishonest approach.”

Díaz-Canel insisted that “action will never be taken motivated by hatred or sowing it,” although he described as “rascals” those who engage in those activities that he called “acting in parasite way,” “people who mostly don’t work, don’t contribute nothing socially to the population or the country; who take advantage of our economic problems to enrich themselves at the expense of others, limiting our population’s access to the things that we have under current conditions.”

Manuel Marrero reported that more than 1,300 people have been confronted for these illicit activities and many measures have been applied, from prophylactic to criminal. He explained that 280 citizens, for their recidivism, have been criminally prosecuted.

The prime minister referred to guidelines received from Raúl Castro, who ordered that people who engage in these activities be advised and persuaded, “but in the face of disrespect, act with energy: stop, prosecute and place at the disposal of the courts.”

The confrontation plan was approved last Friday in the Executive Committee of the Council of Ministers, and involves police forces and the Cuban army, as well as representatives of political and mass organizations.