“What was really announced,” said a note from the Ministry of Domestic Trade, “clarifies that the demand and stability is not satisfied until March, since it is not backed by the available supply and that its offer should be stabilized at adequate levels as of April.” 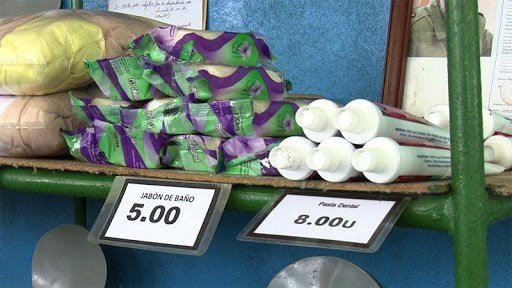 The Cuban government denied this Saturday that there will be no toiletries on the island until next April, as has been commented on social networks after recent statements by Minister of Domestic Trade Betsy Díaz.

A note from the Ministry of Domestic Trade (MINCIN), published on its website and which also appeared in the official media, says that people, whom it describes as “unscrupulous and unpatriotic,” “have maliciously disseminated false information about an alleged statement by the Minister,” who had allegedly said that there would be no toiletries until April in Cuba.

“What was really announced,” the official note says, “clarifies that the demand and stability is not satisfied until March, since it is not backed by the available supply and that its offer should be stabilized at adequate levels as of April.”

The MINCIN note affirms that those rumors by “the lackeys of imperialism” seek to “damage the image of the Revolution” and “undermine the unity of the people,” which, it says, “they will not achieve.”

On the other hand, it does not give explanations about the current situation of the distribution of toiletries nor does it provide more details about its expected normalization next April than what the minister said during a visit to the central province of Villa Clara.

At that time, Díaz confirmed that “in recent months there was instability with the delivery of products such as detergent, soap and others very demanded by the population,” according to a report published by the official newspaper Granma.

The head of MINCIN said that this situation has been due to “the financial limitations of the country, associated with the intensification of the criminal U.S. economic blockade, which intends to asphyxiate us,” and explained that in this scenario, the government has given “priority” to food―in particular those of the rationed family basket, which, she said, is nevertheless “insufficient”―, fuel and medicines.

Díaz said that the Cuban government and her ministry “have been looking for financial variables and alternatives and have signed new agreements,” which is why “we think that in April the supply of the main toiletries and other highly demanded products, such as chicken, will be stabilized.”

Last October, the minister had already recognized that the island had a shortage of toiletries and cleaning products, as well as other products in high demand such as tomato puree, beer and cigarettes.

At that time, she said that Cuban industry could only guarantee 50% of the population’s demand. However, she said that in the chain of stores the presence of washing and bath soap, toothpaste―even when the industry could not meet the needs―, and detergent would be maintained, while “alternatives” were being assessed to continue buying from Unilever Suchel SA, a joint venture that operates in the Mariel Special Development Zone.

In the complex economic situation the island is experiencing, due in large part to the U.S. sanctions, internal inefficiency and the crisis of its Venezuelan ally, it is common that several products are lacking in Cuban stores, shortages that generate a high social concern and cause dissimilar reactions and comments both in the streets and in alternative media and social networks.