The president, together with Vice President Salvador Valdés Mesa, Prime Minister Manuel Marrero, and other officials, began a visit to Santiago de Cuba, the third of its kind to that eastern province and the first to a territory on the island after the start of the current post-COVID-19 de-escalation. 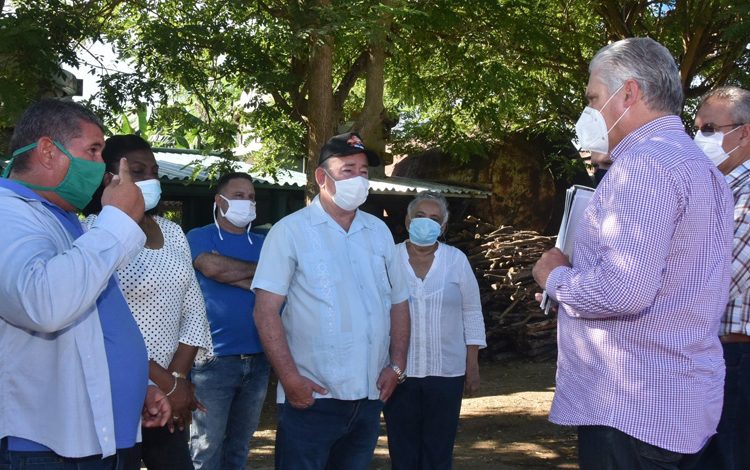 Cuban President Miguel Díaz-Canel (2-r) with authorities from Santiago de Cuba and workers from a comprehensive farm in that province, during a government tour of Santiago, the first during the post-COVID-19 de-escalation. Photo: ACN.

Cuban President Miguel Díaz-Canel along with other members of his government resumed government tours outside of Havana, a common practice during his term and which had stopped due to the coronavirus pandemic.

The president, together with Vice President Salvador Valdés Mesa, Prime Minister Manuel Marrero, and other officials, began a visit to Santiago de Cuba, the third of its kind to that eastern province and the first to a territory on the island after the start of the current de-escalation, according to the Agencia Cubana de Noticias (ACN) news agency.

It “is being carried out this time in a reduced composition, ensuring in the routes compliance with the measures established to curb COVID-19, with emphasis on the hygienic-sanitary protocol and physical distancing” and, as part of it, “several working groups, with members of the Council of Ministers, are making visits to productive centers, educational and scientific centers, hydraulic investments and other places of economic and social interest in the province until tomorrow,” the report states.

The agency and other official media reported this Thursday on the activities carried out by Díaz-Canel and the rest of his government team in Santiago de Cuba “to verify the progress of economic programs and investments” and to exchange with authorities and residents.

Thus, the president visited a comprehensive farm “where he exchanged with a representation of workers and assured that this piece of land shows what urban agriculture can contribute,” the ACN said. In addition, he visited a cement factory under construction and the joint venture ELF GAS. SA, dedicated to the storage and packaging of liquefied gas and the filling of cylinders for the eastern Cuban provinces.

On the other hand, Vice President Valdés Mesa analyzed the internal migratory situation of Santiago de Cuba, “characterized by the exodus to the west of the country, and the territorial strategies to contain this behavior in the shortest time possible,” Cubadebate said.

Meanwhile, Prime Minister Marrero was at the Bioproducts and Scorpion Farm Plant of the state company LABIOFAM, where the venom of the scorpion that is used to make a drug against cancer and other diseases is extracted. He also visited a farm in the Santiago municipality of San Luis and planned to visit other “centers of economic interest in Songo La Maya and Segundo Frente.

Furthermore, Deputy Prime Minister Inés María Chapman analyzed “the state of investments in the hydraulic sector in the Palma Soriano municipality of Santiago, one of the most deteriorated in this regard,” the ACN reported. And Deputy Prime Minister Roberto Morales Ojeda, together with Minister of Public Health José Ángel Portal, visited the Dr. Juan Bruno Zayas General Hospital and the University of Medical Sciences of the city of Santiago.

Santiago de Cuba, like most of the island, is in the “new normal,” a category with which the government designates the reopening stage in the provinces that keep COVID-19 under control. Santiago de Cuba has not reported autochthonous positive cases of the disease for more than 160 days.